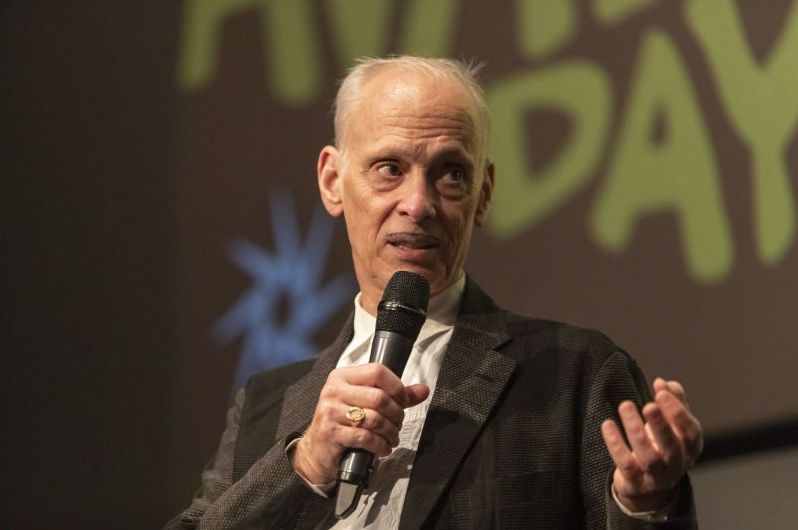 Legendary John Waters, a true cult cinema icon and honorary guest of the Thessaloniki International Film Festival, gave a masterclass on Thursday, November 7th 2019, in “John Cassavetes” theater, and talked about his films, his home town Baltimore, and the ever-supportive audience, offering relishing moments to all attendees.

Legendary John Waters, a true cult cinema icon and honorary guest of the Thessaloniki International Film Festival, gave a masterclass on Thursday, November 7th 2019, in “John Cassavetes” theater, and talked about his films, his home town Baltimore, and the ever-supportive audience, offering relishing moments to all attendees.

The Artistic Director of the Festival, Mr. Orestis Andreadakis, welcomed the famous artist to the anniversary organization, labelling him as “the coolest person in the history of cinema”.  The coordinator of the masterclass and Head of the Festival’s International Program, Mr. Yorgos Krassakopoulos corroborated Mr. Andreadakis, before giving the floor to Mr. John Waters, by saying: “You have been named a lot of things, but you are by far the nicest guy in the world.” “Why shouldn’t I be so nice when I come to a country where they treat me so nicely? Everybody is smart, looks so good and laughs with my jokes, why would I not be nice?”, was the filmmaker’s response, who stole everyone’s heart in Thessaloniki with his humor and inbred courtesy.

“The Pope of Trash”, as William Burroughs labelled him, received a carte blanche by the 60th Thessaloniki International Film Festival to choose ten of his favorite films, both fiction and documentaries, that reflect his love for extremes in art and exploitation films in particular. Referring to Burroughs, John Waters said: “He was a huge influence when I was a kid. He always looked old. Even when he was ten years old, he dressed like an old man”.

Reminiscing on his past and the pre-social media era, John Waters explained how he created, without even trying, a brand name for himself. “Nobody knew who we were and I had no money for advertising. If you don’t have money for advertising, you use the press and the press uses you. I like the press, I read seven newspapers every day. It’s free advertising. When you have a full-page article about you in a newspaper it’s amazing. Do you know how much that would cost as an advertisement? Thousands of dollars. When I’m giving an interview, it is as if I am going to my therapist. I want to get people to come and see the movies. And that’s the thing a lot of young filmmakers never realize: no matter how good your movie is, you have to find someone to distribute it and someone who is going to like it besides you and your mother. Learning the business is just as important as learning the art part, because both things have to work to get people to see your movies”.

“Weirdly enough, my films were commercial. People say about Pink Flamingos “how did you make such an uncommercial movie?” Along with Divine we used to go out on the streets with flyers and hand them out to people or going to restaurants when people were eating and give them flyers: we were doing our own ad campaign. Then the reviews started to pop up and they were terrible. I may say that I had the right kind of bad reviews, like “This is the most disgusting movie I have ever seen!”, and my own personal favorite “Where do these people come from? Where do they go when the sun goes out? Is there a law or something?” So, I ended up hiring theaters and promoted all by myself the films that I made. My films were disgusting, I was well aware of that, but they displayed a good sense of humor. I have never dabbled in romantic movies or science fiction. I know nothing of these genres”, he concluded on this topic.

John Waters then talked about his muse, Divine, “the best actress in the world”, as he characteristically put it. “She moved up to the street next to my parents and we were both seniors at high school. She was bullied a lot by her classmates in the same school that, years later, organized a campaign against bullying, which was dedicated to Divine. Highschool is brutal for everybody except for prom queens and football players. The day they graduate from school their life goes downhill. Everybody else’s goes up. Everybody has a miserable time in high school. It is a much easier time now for gay people. I never wanted to be like everybody else, so it wasn’t so difficult for me. Today most gay bars in the States are closing, and it is a progress in a way”, he characteristically said.

Yet, his own school and university years were riotous, too, having been expelled from school and kicked out from university “for the first marijuana scandal ever to occur on a university campus”, as he proudly admitted. “No school film then allowed you to make that kind of movies and now you can make a snuff film. So, I learned making films by doing it. My influences came from Ingmar Bergman’s art films – besides, he was the first director who ever showed vomit on film. He is the puke king – and then I would see the underground movies. So, I tried to put all those influences together to make exploitation films for art theaters. The truth is that I always had an audience. I had an audience right from the beginning and it was a mixed audience. I was borrowing money from my father to make films and he was shocked when I returned the money to him, because he was sure I would not pay him back.”

Following a question whether making movies is fun, he responded: “Making movies is never fun. I look back on it with pride and everything but fun? Fun is when I am out of work having Martini but twenty-two hours of shooting in the rain and in the freezing cold with a camera in your hand, this is not fun. But this is part of it. And this is how you learn making movies. What else could I do? I couldn’t think of any other job that I could do except maybe become a shrink, or a criminal defense lawyer.”

The filmmaker did not neglect to take on Hollywood: “If they don’t want your next movie, they don’t pay you. When Hairspray became a hit, every studio wanted to make my movie. They were sending me presents and everything. So, I learned how to play the game. And I think Hollywood treated me right. I never put out a movie that I didn’t want to put out. Through all this Hollywood years, I always put out the movie I wanted because they needed me to promote it. That is a common thing you have to learn in the show business. If you don’t want to hear their opinion, make a film yourself with your own camera. But if they give you money, they got to have something to say. So, learn to deal with that and still get your way. That is the tricky part.”

John Waters did not neglect to comment on Donald Trump, either: “Fascist hair dudes are ruling the world. Why do they all have weird hair? As soon as he is starting to wear his hair weird, look out! Trump does not care about the arts. You go in art film theaters in America and it’s full of old people. The comic movies are something different. All young people want to go to the mall. I hate malls. I don’t want someone eating lobster next to me when I am watching Lars Von Trier.”

Failure has always been an integral part of his career. “I had big failures. A lot of my films have failed in the box office. They give you money to make a movie and then you spend eight months on a project that doesn’t happen and it is frustrating, but it is not as frustrating as not having a job for eight months. I was an ambitious kid, I wanted to succeed. Naturally, if you do something for fifty years, you end up being appreciated. If you want to impress others, you have to stand out because there are so many people who want to be in the arts. Failure lets you regroup and lets you think “I am not so smart”. And then, you start again. Nobody has success all the time. I have always had new ideas. I can’t understand how people get bored; I am never bored”, he explained.

What is, according to Waters, the most important element that makes a good film? “The plot”, he answered with disarming lucidity. “No comedy should be longer than ninety minutes. I hate long jokes. All movies are too long. If you ever think about your movie ‘Should I cut that’? The answer is “yes”! Every frame is precious when it is your first movie. I always loved feel… bad European movies. I liked hard movies. I hate when people say I only like a movie when it makes me feel good. Why? I feel good anyway. It’s not the movies’ duty to make me feel good. I like to feel horrible when I am out of a movie. I like weird art movies. I love Gaspar Noe movies, I love Lars von Trier’s movies, Tarantino’s also. I liked the Joker, too. I love Hollywood movies too. I like all kind of movies. And I don’t care how you watch it. On your phone or in a movie theater. I hope you will watch my own movies on your mobile phones. You won’t notice all the mistakes”, he mentioned with his trademark humor.

Concerning what advice, he would give to young artists, John Waters said the following: “Protect your intellectual property by copyright, before starting to promote your film”. On whether he would make a film in Greece, he responded that he does not know our country that well, to make a movie here. “Baltimore is like a character to my movies, not that I can’t shoot somewhere else but I don’t know Greece well enough. My favorite “Greek” film is Summer Lovers, filmed in the Greek islands (note: in Santorini), which is the most ludicrous teen romance film. I would like to distribute it and turn it into Winter Lovers”, he said.

As the filmmaker said, he is not preparing a movie at this time. “I am in peace now. I have made seventeen films. It is not like I haven’t spoken. The way the independent film landscape is at the moment, I can’t shoot a film. I could of course do TV. I like TV a lot. Yet I am writing my books, which they do better at the moment. Besides, I like telling stories one way or another. I have a huge art collection of strange books, that I never read, just enjoy their covers and their oddball titles, like Extreme Ironing – really, how many ways are there to iron something? – or, Dads in Jail, a children’s book for dads who are in prison” John Waters mentioned, thus concluding an exhilarating masterclass.