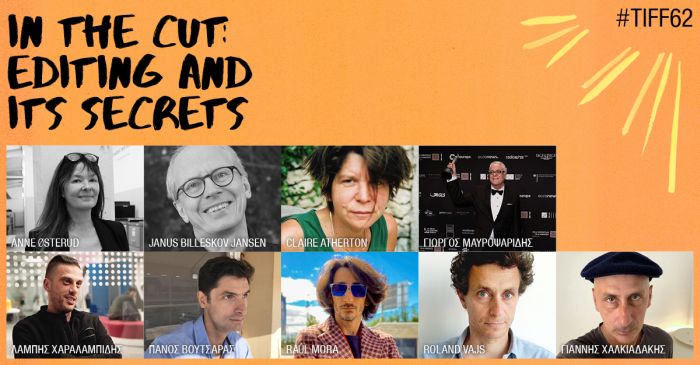 All talks are open to the audience, attendants will enter in order of priority. Entrance will only be allowed to persons who have been vaccinated against Covid-19 or have contracted the virus within the last six months. All talks will take place at the Pavlos Zannas theatre.

The power of the moviola in changing the narrative in order to lead the emotions.

Impassioned by the quest for rhythm, Claire Atherton is guided by the conviction that time is a cinematic material, a narrative element such as image and sound. According to her, editing shapes the fi lm, giving it body and rendering it visible through a process of shared research, combining intuition and thought. With Claire Atherton we will use selected extracts of fi lms to immerse ourselves in her practice and philosophy of editing.

Using material from his extensive fi lmography, Yannis Chalkiadakis shares the secrets of all we see, all we don’t see and all we simply dream of, when a fi lm unfolds on the screen.

Serbian sound designer Roland Vajs is accompanied by his foley team. This masterclass will focus on exploring fi lm soundtrack and its relationship with the image. Through the live creation of sound effects on stage, the audience will have a chance to go into unseen workings of fi lmmaking. Additionally, Vajs will confer with colorist Paulo Americo on the importance of the work of the colorist in the editing procedure.

The editing process through which we trace “what was shot” and what is real, always in relation to a character in a fi lm. How important is to draw a distinction between a fi lm’s hero and the complexities of an actual character? And how do they remain true to themselves when an editor is called to change the climaxes and the turning points.

YORGOS MAVROPSARIDIS • THE BRAIN IS THE SCREEN

Oscar nominated editor Yorgos Mavropsaridis examines how editing encodes and communicates its narrative and messages to the audience.

MEET THE EDITORS BEHIND “ANOTHER ROUND”

In this seminar, Anne Østerud and Janus Billeskov Jansen, who edited “Another Round”, talk about the editing process behind the Oscar winner. Through conversations and fi lm clips, Anne Østerud and Janus Billeskov Jansen focus on the editing process and the choices and decisions that form the basis of the fi nished fi lm. Selected examples of clips, scenes and material will be used to show how the editing shapes the narrative, and we become wiser about how well-known scenes could also have been edited. We hear about Anne’s and Janus’collaboration – how it unfolds during the cutting process.The seminar is aimed at editors, photographers, directors and others in the fi lm, television and media industry, who would like to learn more about how editing shapes the fi nished story, and how a collaboration on editing can open various perspectives. Anne Østerud and Janus Billeskov Jansen have worked with directors such as Thomas Vinterberg, Nicolas Winding Refn, Niels Arden Oplev, Bille August, Nils Malmros and Søren Kragh-Jacobsen. Together, Anne and Janus have edited a number of major Danish fi lms, most recently Bille August’s “The Pact”. Both have won numerous awards for their work.

Α talk interweaved with a series of videos of La casa de papel and photo documentation of spaces, equipment, and other technical parts. A masterclass that gives an overview of the management of the creation of a series, employing a large team of editors on the editing line and generating important synergies, maximizing the potential of a team on a tight schedule. This session will focus on the approach to a complex endeavor (such as “La casa de papel”) and the method the whole crew developed in order to push the series to the maximum.

(simultaneous translation from Spanish to English and Greek)

Claire Atherton
Claire Atherton is a film editor born in 1963 in San Francisco. Attracted by Taoist philosophy and visual ideograms, she turned to studies of Chinese language and civilization, then she enrolled in the professional branch of the Ecole Louis Lumière in Paris. She was interested in sound and she also worked as a cinematographer. But it’s in the editing that she found her way. She met Chantal Akerman during a shooting in 1984. Two years later, she edited Letters Home, a little-known film with Delphine and Coralie Seyrig. This work revealed considerable complicity and a shared sensibility with Akerman that have increased with time through documentaries, fiction films, and installations. Atherton and Akerman worked together for more than thirty years, until Akerman’s last film No Home Movie and her last installation Now. Moreover, Atherton works as an editor with a wide range of filmmakers and artists. She has been collaborating for several years with Eric Baudelaire on his films and installations. In 2019, she received the Vision Award Ticinomoda from the Locarno International Film Festival for the body of her work.

Lambis Haralambidis
Lambis Haralambidis, born in Athens (Greece) in 1977, is a well-known editor (film/tv productions) in Greece. Having already become a dedicated cinema lover during his adolescence, he studied Directing and Editing for Film and Television at the Chatzikou Film School in Athens (1994-1997). Before even finishing his studies, he started working as an assistant editor (1996) and since 1998 he has worked at a large number of film and TV productions as an editor. He has edited more than twenty-five feature films and numerous TV commercials. He has worked with Theo Angelopoulos, Costa Gavra, Edward Pressman, and has edited films in many different countries. He has also won numerous awards, including three Greek Academy Awards for Best Editing in Feature Film.

Yorgos Mavropsaridis
After graduating from the “Theater Workshop” (1975) and from the London International Film School (1978), Υorgos Mavropsaridis has been working as a film editor. He has been nominated for an Oscar in the Best Editing category for The Favourite, directed by Yorgos Lanthimos, which granted him the American Cinema Editors Award for best editing in the Comedy category and the title for Best European Editor for the year 2019. He was nominated for the editing award for the films The Lobster (best edited feature ﬁlm - comedy, ACE), Modris (2014), Chevalier (2015) (Hellenic Film Academy).

Raúl Mora
Raúl Mora (Madrid, 1973) is a filmmaker and audiovisual editor of TV shows, video clips, programs, documentaries, commercials, and short films. Mora studied photography and, after working as a freelancer for several years, began his professional career in television on Canal+ in 1995. Since then he has collaborated in the department of self-promotions and programs of audiovisual companies such as Paramount Comedy Channel, AXN, TELSON, Via Digital, Canal+, TeleCinco, Antena 3, Canal Satélite Digital, and Globomedia. In 2006 he specialized in fiction editing by collaborating with the Globomedia production company and he also developed his career as a film editor with other production companies such as Mediapro, 100 Balas, and Adisar. In 2003 he founded Minuscule Productions, a small audiovisual production company that is still active. His works include video clips for Rosario Flores, Caetano Veloso, Miguel Poveda, Innocence, and making-ofs for El Deseo Producciones. He is the editor of the popular Netflix series La casa de papel.

Roland Vajs
Roland Vajs is a Serbian sound designer working between New York, Los Angeles, and Lisbon. He is known for his work on Gaza Mon Amour, Manchester by the Sea, Green Room, Boardwalk Empire, The Night Of, Chocolat, Lust, Caution, among others. He has worked with a broad range of film directors, artists and producers including Ang Lee, Martin Scorsese, Michael Moore, Larry Clark, Mira Nair and Javier Tellez. He is a six-time Emmy nominee for his outstanding sound work and won three Primetime Emmy Awards for his work on Boardwalk Empire, The Night Of, and Free Solo.

Panos Voutsaras
Panos Voutsaras is an award-winning film editor with a wide experience in all genres of movies and TV productions. Having worked for more than twenty years in the motion picture editing industry, Panos has cut over 15 feature films, 50 shorts, and numerous documentaries, TV productions, and commercials. His work has premiered in dozens of festivals around the world, such as Berlin, Venice, Toronto, and HongKong. He’s a founding member of the Hellenic Film Academy. Panos grew up in Athens where he attended the Stavrakos Film School.