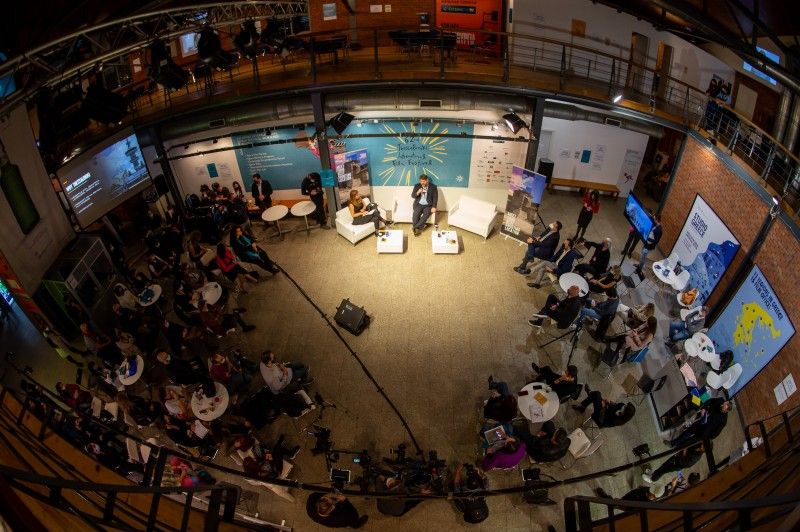 The Regional Governor of Central Macedonia, Apostolos Tzitzikostas, took over and started his speech by thanking everyone that played a major role in establishing Greece as an ideal destination for film productions. More specifically, he thanked the Head of Tourism of the Region of Central Macedonia, Mr. Alexandros Thanos, for his great contribution all these years. Then, he thanked Mr. Panos Kouanis, President and CEO of the National Center of Audiovisual Media and Communication (EKOME), who set the foundations and the new laws that placed Greece in the heart of film productions. He also thanked the General Director of the Festival, Mrs. Elise Jalladeau, and the producer and production manager of Millennium Media, Rob van Norden.

Then, Mr. Tzitzikostas made a concise presentation on the establishment and function of the Film Office Central Macedonia, which was the first Film Office to run in Greece. “We were the first Region in Greece that created a Film Office. It was created when I learned that Panos Kouanis was bringing new laws, which will give a chance for the industry of cinema to come here. We decided to establish a Film Office, and we were the first to do so. The first thing I did was to travel to Hollywood with my assistants in order to present Central Macedonia to all the big companies in Hollywood”.

Then, Mr. Tzitzikostas named all the elements that make Central Macedonia an ideal place for film productions. More specifically, he referred to the geomorphological diversity of the landscape, which allows the alternation of scenery, as well as the great weather conditions, which makes it ideal for shootings throughout the year, as the main elements that make the region stand out for shootings. He also focused on the human factor that strongly supports film production. “First of all, it is a very large region, with a diverse natural landscape, from mountains to lakes and forests. You can shoot a film in winter or summertime, in fact in any of the four seasons. The weather is good. We have wonderful cities and people who can help and support such ventures”.

Mr. Tzitzikostas referred also to the films that have been shot or are expected to be shot in the Region of Central Macedonia this year, such as The Enforcer, starring Antonio Banderas, The Expendables with the superb cast of the well-known franchise, and the film Behind the Haystacks, which was shot in the regional unit of Kilkis. He also stated that there is a strong interest for film productions in Central Macedonia, not only from Greek companies but also from international, including some from Bollywood. He also added that the Film Office is active and ready to offer any kind of help that the production might need and that the power of the region in film production is expected to rise, following the creation of new cinema studios in the region of Thermi.

“I had interesting discussions and meetings with Bollywood. Hollywood is of course the number one industry in the world, but there are many more who show interest in Thessaloniki. We are here to make it easier for those people. From cutting the red band to help them get the license they need. From closing the road to get permission to use explosives. Another topic, which was discussed with the people from Millenium Production in Hollywood, was the construction of a studio in Thessaloniki. They will be visiting Thermi, a very beautiful region. I am sure they will attract many productions in the future”.

As Mr. Van Norden explained, there are many reasons why they decided to come to Greece. First of all, there are specific key people who paved the way for the film production in Greece. “There are two people responsible for this. Panos Kouanis, President of EKOME, explained to us the new laws, what Greece was doing and which were their priorities. Panos opened the door for us. Also, Yannis Kalafatis collaborated with our studio to start building a recording studio here in Thessaloniki and to transform our experiment into a permanent establishment. Not only to make a movie here, but also to build an industry from the start. It is an organic process. Working with Yannis and with the guidance of Panos, I think we can make Greece a true center for film shootings in Europe”.

Rob Van Norden referred to the reasons that led him specifically to Thessaloniki. First, as he explained to the audience, the geographical proximity to the production base in Bulgaria helped the fast transportation of special equipment for the films. And as he pointed out, speeding things up is important in such film productions. “It is very close to our center in Sofia. We could bring special equipment, vans for the actors, and lights. Until we can be fully equipped and organized here we need a way to move fast. As an independent film production company, we work fast. We work with movie stars according to their schedules, and their schedules are busy. We have to be fast”.

As he pointed out, the biggest asset of Thessaloniki as a spot is the people, both citizens and administrative bodies, and their eagerness to help film productions overcome any obstacle that might come in their way. “We have everyone’s support and collaboration here. People here invest in your success. They will give you what you need. From the Film Office, to the Office of the Regional Governor, from the Deputy Minister of Interior – Responsible for Macedonia-Thrace, Mr. Stavros Kalafatis, the municipality, the police, all these various teams. You need help to make the movies fast. There are not many cities that could have made the creation of a film like The Enforcer easier”, he mentioned.

In this frame, the Film Office Central Macedonia, as he explained, is from start to finish a great supporter of film production. “Our first stop is the Film Office, where you learn how things work. The people at the office are extremely helpful. They helped us with the bureaucracy - and there is a lot of it in this country. They assisted us in finding the locations for the shootings in Thessaloniki. With their help, we did the shooting in Michaniona, Perea and Kalochori.

The incredible experience during the first attempt, with the shooting of The Enforcer, made them, as he said, wanting to return to the city and attempt to shoot a pure action film, like The Expendables, with the shootings starting soon. As he said, the collaboration of the authorities is already important. “We work together with the Ministry of Foreign Affairs. Our actors need visas, residence permit, and documents for COVID restrictions. And the Ministry of National Defense. We did some shootings with Greek tanks. Finding people with such skills in Northern Greece was a challenge. The industry here is small. Working with the Film School was a big deal. For every stage in the production, we found young, hungry and talented people. They will learn as we did, by creating and making things”.

Unit production manager, Dimitris Karbas continued to affirm Mr. Norden’s claims. He explained that the bureaucracy was an issue they overcame with the help of the Film Office Central Macedonia and of EKOME. The next speaker, producer of the film Behind the Haystacks, Panps Papahadjis, corroborated the same arguments. The film was the first one to be created with the help of the Film Office of the Region. He thanked the Film Office for the great support in the production. “We would like to thank the Film Office and Mr. Tzitzikostas. We started early this year, in the middle of the pandemic, and a part of the shootings was here in Central Macedonia, in Kilkis”. Concluding the presentation, the upcoming actions of the Film Office were presented. It includes the creation of a user-friendly guide of the film industry, as well as the development of a library, which will include the best locations for shooting a film in the Region.

“We are developing an industry guide including companies and people, who are directly or indirectly related to the film production. We want to have them all together and match them with the professionals coming here to shoot films. We are also developing a Location Library, with visual materials throughout the year and locations that can be adjusted in projects from different genres, in order to promote the Macedonia region in the best possible way as a destination for film production. These two tools will be ready in the beginning of next year and they will be available in printed form and online. We invite all the professionals that they would like to be included in the industry guide to send us an email at filmoffice.pkm.gov.gr/”.

At the end of the event, which was coordinated by Stavroula Geronimaki of the Hellenic Film Commission of the Greek Film Center, the audience was informed about the training day, organized by the Film Offices of the country, the Hellenic Film Commission from the Greek Film Centre, in collaboration with the European Film Commission Network (EUFCN), as part of the Agora of the 62nd Thessaloniki International Film Festival, with the support of Athens Film Office. The event will be held on the 9th of November, between 10:30am and 4:30pm, at Mediterranean Palace Hotel.