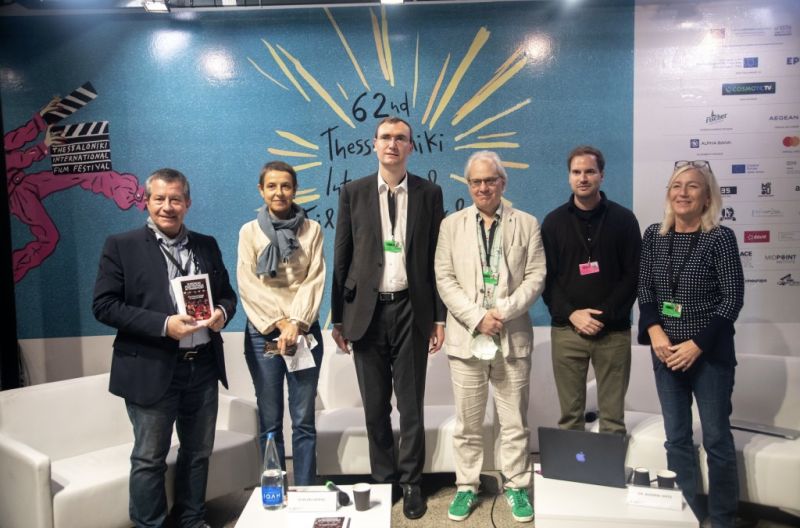 Τhe presentation of the research on "Pan-European Film Festivals in Transition? Covid and beyond” was held within the framework of the Agora Talks of the 62nd Thessaloniki International Film Festival, at Warehouse C, at the Port of Thessaloniki, on Monday, November 8th.

The research pertains to the period August 2020-July 2021 on focuses on how festivals made use of different viewing patterns: physical presence, where festivals are held in physical spaces, hybrid festival, which combine physical presence and online viewing, and online, where festivals films are screened exclusively online. The number of festivals surveyed is 13, while research data includes, among others, 12 interviews with artistic directors, general managers and project leaders. More specifically, the film festivals that participated were the following: Cannes, Berlinale, Venice, San Sebastián, Zurich, Karlovy Vary, BFI of London, Rotterdam, Thessaloniki, Gothenburg, Ghent, Les Arcs and Dublin. The research was supported by the Thessaloniki International Film Festival, the research project CONEX-Plus of the Carlos III University of Madrid, as well as the Berlin Senate.

The event was prefaced by Elise Jalladeau, the General Director of the Thessaloniki International Film Festival. "The situation in the pandemic has been an unprecedented experience for festivals. We carried out this research because we felt we needed to record this situation in a systematic way. We chose festivals held in a similar way. We did not focus on the markets, because they had their own problems to deal with, but on European festivals because we operate under a similar framework. The situation was constantly changing. There was no other way to gather data", she noted.

The results of the research were presented by Dr. Roderik Smits, a researcher at the Carlos III University of Madrid. As he explained, the festivals with the greatest international prestige, such as Venice, Cannes and Berlin, chose to insist on the model of physical presence. "These festivals host the biggest premieres of international and national films and especially films of high artistic prestige. They also rely on the big screen experience. In addition, they decisively contribute to the economy of their home city or country. I can't imagine these festivals operating through a different model", he pointed out.

He went on to say that it is difficult to replicate the big screen experience through online screenings. "The big screen experience is about collectively watching movies with high-quality image and sound characteristics. There are, therefore, advantages that the hybrid model may offer, that, as the research revealed, is ultimately what was preferred as an alternative to most festivals. It facilitates procedures such as the collaboration of jury committees; the inclusion of film reviews and other means of communication that increase the visibility of festivals and films, the organization of activities to increase the audience interest such as Q&A, while there are also increased networking opportunities between the different factors of the film industry. Flexibility is also given to the public, while increasing accessibility and inclusivity", he pointed out.

Elise Jalladeau corroborated the above statement by explaining that the Festival embraced the hybrid pattern, receiving significant benefits. “At first there was uncertainty. Festivals feared they would lose their identity. We didn't know if people would buy the tickets for the online screenings and we were afraid that maybe this entire situation wouldn’t make any sense for the audience. At the end, it had a great impact and through this process we expanded our audience. Especially with regard to the documentary festival, we noticed that 40% of the audience that bought tickets for the online screenings had never come to the festival. So, we were able to reach more citizens through this model", she said.

When asked by the audience about the future of festivals and its connection with the future of the audiovisual market, Mrs Jalladeau argued that the hybrid model will dominate. "We have to be hybrid. Markets will also become hybrid. The future of festivals is inextricably linked to the future of markets. We are not the only player in this industry. Don't forget, too, that many festivals are also markets at the same time. I'm not worried about festivals in short term. We've increased our audience over the past five years. Consider that streaming platforms as Netflix are hosting film festivals. I am more worried about distributors. Things will be more difficult for them", she said. Mr. Smits said he was more sceptical. "I see platforms as a threat. We have to give even more to the public than we already give", he noted.

Mrs. Jalladeau then pointed out the need to support the culture of the film theatres. “We must support the theatres; we must protect them. The exclusively online model can't work. Festivals are community events. We are not streamers; the platforms do that very well" Mrs. Jalladeau said. As she explained at the end of the presentation, the best way to support film theatres is through constant activity. Festivals must constantly give their presence and give something special to the audience. "If you want people to get up from their couch and come to the festival you have to motivate them, by having a presence throughout the year through actions and events. As well as being in contact with local organizations, institutions, associations, museums. You also have to give them the feeling of the one-off moment. They must feel that if they do not come to the theatre they will lose something unique that will not be repeated", she concluded.