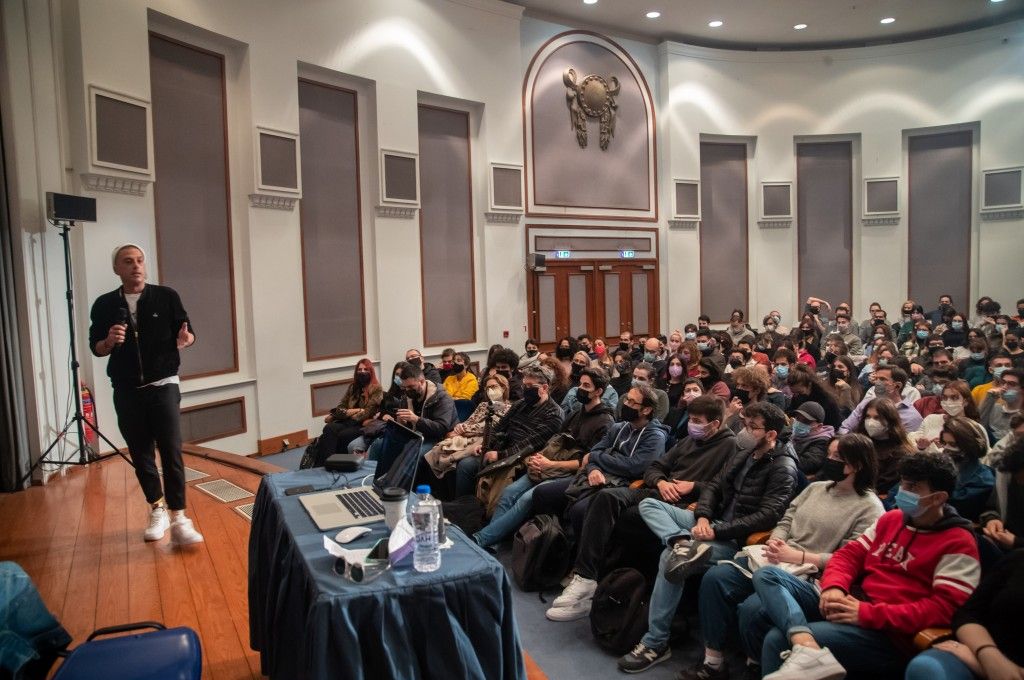 Experienced editor Lambis Haralambidis, who has collaborated with great Greek directors, such as Theo Angelopoulos, Costa Gavras and Angelos Frantzis, delivered a masterclass at Pavlos Zannas Theatre, on Wednesday November 10. Lambis Haralambidis’ masterclass, titled "Character-driven editing", is part of the large-scale tribute of the 62nd Thessaloniki International Film Festival "In the Cut: Editing and its Secrets".

Apostolos Karakasis, professor in the Film School of the Aristotle University of Thessaloniki, prefaced the event, addressing the audience. Afterwards he welcomed Lambis Haralambidis and referred to the Greek editor's initial stint in the documentary genre, as well as in short films and television series, until eventually he fulfilled his dream and entered the magic world of cinema.

Lambis Haralambidis then took the floor, starting his analysis on the way film characters are structured through the editing process. "Most of the time things in editing don't work. In general, no matter how good an editing is, if the actor doesn’t have a solid performance, editing goes down the drain", Lambis Haralambidis said in his opening statement. "We never take arbitrary decisions in editing; on the contrary we follow the script and the direction of the film. The only thing we are interested in is the truth of the hero. We are interested in an editing that follows the hero. We want to depict his tension and emotions. In editing, we are not so much focused on the actions of the heroes as on the way the heroes accept the result of the actions and the influence they have on them," he said.

"In cinema and editing, appearances may be deceiving, one plus one may as well equal five, ten or forty. You have to take a thorough look at the initial footage material from all angles and perspectives. Put in as many assets as possible: beauty, ugliness, toughness, and then decide how to pass them on to the viewer," he commented. He also referred to the so-called "shooting convention". In other words, the change of editing depending on the shots you have (or don’t have). Subsequently, Mr. Haralambidis showed a sequence from the film .dog by Yianna Americanou, screened at the meet the Neighbours competition section of the 62nd TIFF, followed by scened from other films (Zizotek, Wednesday 04:45), which he commented by explaining how he overcame several obstacles in the editing process.

“What matters in cinema is not bells and whistles. Cinema needs simplicity and maturity. We can't change if we are not shocked and cinema has to trigger a shock”. He also stressed the need for films to be pre-screened before their completion "so that the actors know where they are heading".

Mr. Haralambidis, when asked by the audience about the screenwriter's participation in the editing, he replied that each film is made up of a group of people that interacts and works collectively: "Sometimes, screenwriters write a little more. We are artists, not accountants", he said. He went on to say that, in a case of disagreement between the editor and the director, the timing of the editor's proposed change to the director is of great importance. "It's also important that the director really wants to listen to you and not because he feels obliged to," he added.

Then, Mr. Haralambidis, when asked about whether the actor knows what the editor needs, he answered that apart from the actor's performance, it is important for the editor to be able to adjust the shots, even if the shots are not as expected. "We're searching for assets within the material we have and we're trying to convince the viewer that something is going on. We look at everything through another leitmotif. We create suspense the viewer hold on to in order to discover meaning", he said.

At that moment, Mr. Haralambidis invited his friend and director, Alexis Alexiou on stage, where they discussed a very difficult scene of the latter's film, Wednesday 04:45, which took two and a half weeks to edit. He also referred to the new language and new ideas constantly emerging in cinema. “Nowadays, films with pornographic or horror elements that would be at once rejected in the 80s, take part at major festivals and win awards.

Concluding, he underlined the importance of creatively tackling the problems in editing: "After the first cut, we leave ourselves free to see the reason why it does not work. We can mask the problem and turn it into a point of view. I always carry editing within me: there are no working hours in editing", he concluded.