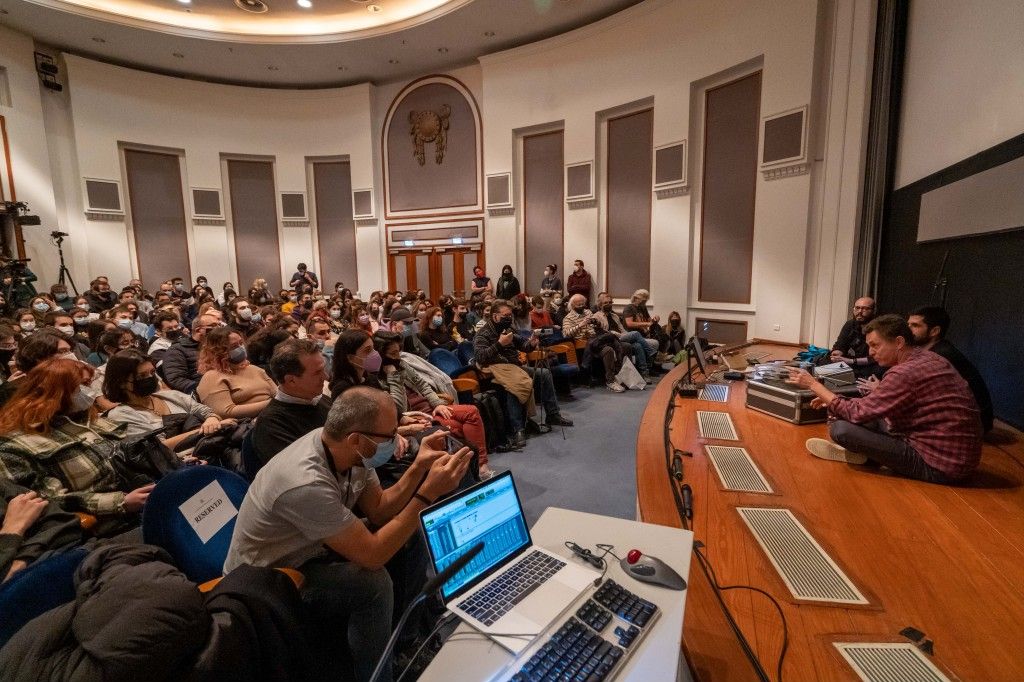 Roland Vajs, the famous Serb-American sound designer, who has collaborated with great directors such as Martin Scorsese, Ang Lee and Michael Moore delivered a masterclass at the packed Pavlos Zannas Theatre on Thursday November 11. The masterclass titled "Deconstructing film sound", where Roland Vajs and his foley team shed light on the process of creating sound in films, is part of the tribute "In the Cut: The Editing and its Secrets", hosted by the 62nd TIFF.

The presentation kicked off with repeated projections of a short clip from the film Gaza, my love, which had its premiere at the online 61st Thessaloniki International Film Festival. During the clip, Vajs and his collaborators used various objects to create live the sounds of the film. In addition, Roland Vajs changed the mixing of sounds each time the clip was re-screened.

Christos Gousios, composer of soundtracks and professor at the Film School of the Aristotle University of Thessaloniki, prefaced the masterclass. "These masterclasses are extremely useful for students and teachers; it is a true source of knowledge. I was thrilled with today's masterclass with Mr. Vajs, as well as with his foley team collaborators Nuno Bento and João Galvão for the sound effects they have produced. Also, Paulo Américo, film colorist, will talk about the importance of colour and image processing”.

"What we want to present is the mystery of sound in the movies. In fact, we also gave you a presentation of how some sounds are created, so that you have an idea, even though in reality, it is impossible to reproduce our working method here and now", Mr. Vajs explained, before moving on to the main part of his presentation.

"We want to shed some light on how sounds are created for a movie. Within these two hours we can’t analyze in detail the whole process of creating sounds, but we hope you will be inspired by the way as you watch us laying down our work. Τhe special edition of the Festival is a wonderful handbook and on this occasion I would like to thank the Festival for inviting me here, but also for their idea to host a special tribute to editing. It is true that editing is a very important stage for a film. I would also like to thank the people of this theatre, who were polite and willing to satisfy our demands", he pointed out.

"The sound in a movie makes us connect with more things than we are able to see. Initially, our first thought is the voice and how we can capture it, because it is very important for the audience to be connected to the film. After the shooting of the film, we begin to edit the film and gradually sound is its "language". The world of sound is a world of technology, aesthetics and creation. It is very important to understand the technical aspect of creating the sound and how we can enhance the story of the film with it. Once we start editing, we always talk to the director to understand what this film means. The sound processing is divided into several parts. One of them is about creating the sounds, another one about how we use them to create the atmosphere, the effects, all the sounds of the film in general, as all the sounds you hear are usually created in studios. All these steps are necessary and very important", Mr. Vajs commented upon the individual stages of his work.

Afterwards Mr. Vajs talked about the sources one can refer to in order to use sounds. "We can build an atmosphere with sounds from various sources: from the 'libraries', the archive of sounds you create as you work, but also from commercial 'libraries'. However, it is very important to capture sounds from locations or sounds that will work properly in specific locations. Moreover, the creation of abstract sounds enabling us to explain what is happening on the screen is very important, too. All this can be achieved in many ways; it is a very productive process, in which the personality, the aesthetics and the choices of each person play an important role. In the end, we have the choice of music, a very difficult part, because music does not lie, while it can exploit the emotions of the audience. This is a something that directors know very well and they treat this matter very carefully and with lot of sensitivity", he said.

Roland Vajs used excerpts from the film Gaza, my love, explaining the way he worked on this production. "Before I even accepted this job, I sat down and talked to the production team to figure out if we shared the same ideas, to explain to them how I work and to see what they want from me. After shooting the film, they sent me the material and told me to start right away. I insisted that we meet and we spent two days talking about the film, in order for me to understand how they want Gaza to sound in their film, because I could not visit the area and record its sounds. I realized that they wanted to hear a dreamy Gaza, not as it is in reality. I used sounds that we already had in our archive from Gaza and a location in Jordan, but we also had to borrow sounds from other places. The impeccable collaboration and the mutual understanding with the production was the secret of our success".

Nuno Bento, Mr. Wajs' collaborator, took the floor to explain what it means to create the sounds of a film. "Creating the sounds for a film (foley) revolves around human interaction with objects. Much of this work is monotonous and arduous, because you have to go step-by-step for all the characters, in all the scenes. But when you get used to this process, which is quite childlike in a way, you understand the characters better, what they are going through, their feelings captured in the way they walk for example. It's like playing a role with the help of sounds; you understand the emotion that lies behind every little movement".

Mr. Vajs and his team answered to the audience’s questions by analysing all the details in the work of the sound engineer work, as well as the nature of sounds in cinema. "All the movies use studio-made sounds, but you don't understand it and that's magnificent. All sounds are processed and become part of the film, wherever they come from", Mr. Wajs replied, and gave the floor to Paulo Américo, who explained the importance of processing the image and colours, through the projection of a short clip.

"I have shown you this clip twice, the first time as it was normally taken and the second time after editing the image. What I want to do her is to advise younger people never start working out with the first versions of a shoot. Emotionally, the image and the sound speak to us, so if they don't have the right amount of content or color, they won't talk to us as they should. Every editing step can lead to a different result, it is a very vivid process," Paulo Américo explained, wrapping up the masterclass presentation.