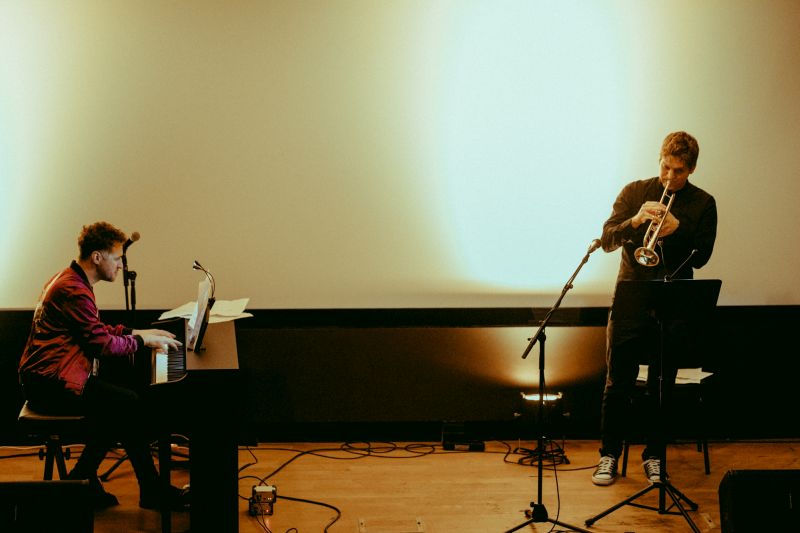 The screening of the documentary Dimitris Skyllas: AFTERPOP was accompanied by live music performance and was attended by both the director and Dimitris Skyllas himself, on Saturday March 12th, in the overflowing theater Tonia Marketaki. The event was prefaced by a trumpet solo, featuring the movie’s main theme, performed by Dimitris Gogas. The screening was followed by a Q&A.

Initially, the Festival’s Artistic Director, Orestis Andradakis, took the floor: “I met Dimitris Skyllas approximately five years ago, as he was performing on Maria Callas’ piano. We were invited to an event and were told that a newcomer composer would play one of his songs on the piano that Onassis had in his yacht “Christina”. When he started to play I thought, “something special and unique is going on here”. Then I listened to his music and fell in love with it. I later realized that he is also a wonderful man who honored me with his friendship".

Orestis Andreadakis then asked the director of the documentary, Dimitris Zivopoulos, about his approach to the composer’s portrait. “I will begin to answer with a short story. I was seeing friends in Thessaloniki and everyone was asking me what the documentary was about. When I said that it is about a composer who has written a piece for the BBC, their next question was: “and when did he die?”. Imagine their surprise when I told them that Dimitris is 35 years old. When I was assigned the documentary, I had to deal with an enormous amount of material, from Dimitris’ trips to the composition of Kyrie Eleison. This was an unprecedented kind of project, a portrait of a classical music composer. That was extremely interesting to me. Of course, whoever gets to know Dimitris Skyllas will come to realize that his personality is also extremely interesting. This combination created a unique opportunity for an interesting project”, Dimitris Zivopoulos mentioned.

Orestis Andreadakis went on to address Dimitris Skyllas, asking him how he feels watching his life on the big screen and where his inspiration comes from regarding his music. In the words of the composer, “I will reproduce a cliché, but I would like to thank some people. What does a documentary need? A production. So thank you to the Onassis Foundation and Stegi. I would also like to thank the Festival team. They have all been amazing. In this film you can see three works of my life in one. Kyrie Eleison, a huge creative task for the BBC. Then, this documentary, which in my opinion, without underestimating BBC and its great prestige, is even more special to me, and just when you say “I am very happy as it is”, Onassis Foundation assigns you to compose the soundtrack as well. I feel very exposed with the documentary, but in a good way, and I have a vision for the years to me: more documentaries about composers to be made and seen, about directors and people from my generation. To stop thinking that one has to be Lady Gaga – whom I love! – to be the main subject of a documentary”, he pointed out. “As for the second question, I feel that when we talk about a work of palrge scale, we have to start small. Then you think about how this material can become part of an orchestra. Orchestras are a very cumbersome and fascinating living organism. To be given a chance, like the one at BBC, to present your work, is a huge workshop as you face the hardships, you see the mistakes you’ve made and how to fix them”, Dimitris Skyllas explained.

To a technical question about whether or not he uses digital media, the composer responded: “They are all manual. The digital era is nice and can make things easier, but this makes us deviate from putting our minds to work. This is the reason I don’t have a smartphone, I may be old-fashioned, yet I try my best to imagine things. The more you pressure your mind to imagine, the more you pressure yourself to create something that reflects an idea”.

In another question, about the idea behind the documentary poster, Dimitris Skyllas said that, “at first I did not want a poster in a bright pink color, since all of my photographs – maybe due to my lack of courage – are in black and white. After discussing with the Foundation I was convinced. In the poster I am holding a horn. For me, AFTERPOP, the title of the film that may seem odd, is in fact ingenuine. When Dimitris and I met, we talked about Lady Gaga, Amy Winehouse and all the pop stars. Who is more pop, Madonna or Beethoven? I have no answer, I love Madonna, we have all danced to her songs, yet at some point something new will come up. Beethoven is still going strong. Him and Mozart were pop in their time. The pink color in the poster is the pop frame. Where I live, exist, spend my days in. I am no better or more intellectual than anybody else. There is a crack in the poster, and it looks like there is smoke coming out from the instrument and going towards the sky. This is my vision”.

What triggered the idea for the film? “When I was assigned the task by the BBC I had something different in mind. I wanted to write the Dance of Zalongo. I liked it as a concept, which I wrote eventually for the State Orchestra, about a year ago for the 1821 celebrations. I then had an offer for Electra at the Epidaurus, so I wanted to have a lamentation on stage. I asked the BBC for a short extension and they ended up giving me a whole season. Epidaurus changed my point of view and Kyrie Eleison became more theatrical for me. So even if at first you have a certain idea, life takes you a different way. It is a privilege these days to be carried away by life…”, the composer said while answering another question. A live performance of the soundtrack came next, with musicians Dimitris Gogas playing the trumpet, James Wylie at the saxophone and Dimitris Skyllas at the piano, wrapping up the beautiful event.

From the Greek mountains to BBC’s grand stages, the 35-year-old provocative composer Dimitrios Skyllas reveals the secrets of today's music-making. The sacred musician, the party freak, and all the life in-between. A visionary gesture to break the stereotypes of classical music in our fast, pop-consuming universe.