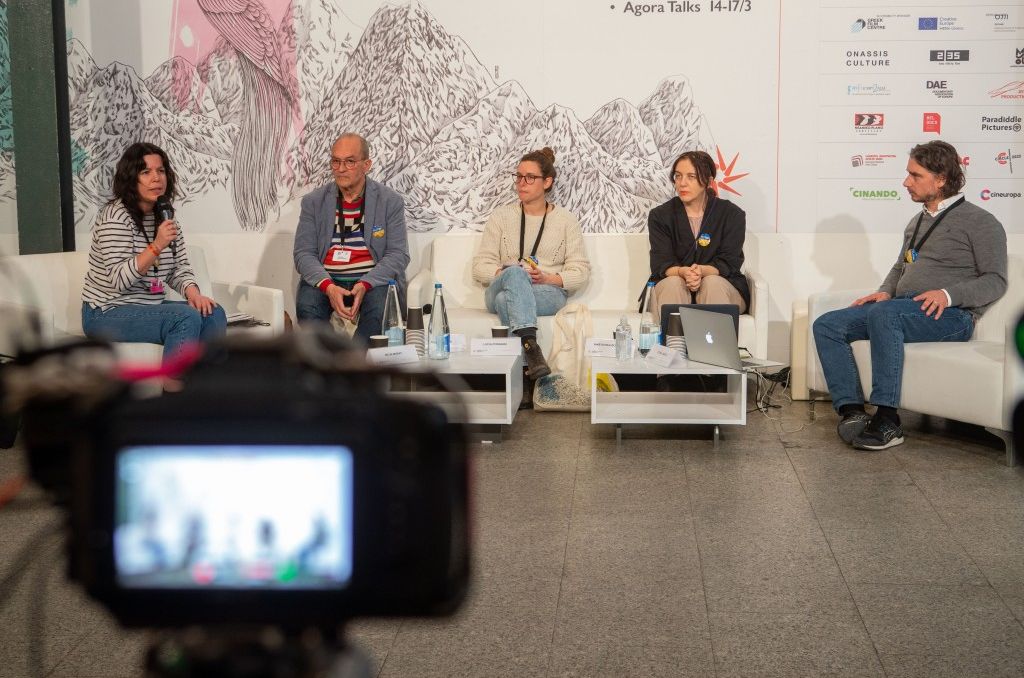 Towards a Pan-European Lobby

Initially, Selin Murat from the European Documentary Network, who replaced Marion Schmidt due to her covid-related absence, had the floor. “The Documentary Association of Europe - DAE is working towards the mapping of European documentary and had a meeting in 2020, both in Torino and Mallorca, where the needs and challenges faced by documentary associations, their members and producers, were discussed. We will talk about this idea and the ways in which various national documentary associations can collaborate. In the meeting of 2020, six issues were raised. The need for an expanded collaboration. The accessibility of the governments to funding. The wish to build better communication bridges. Placements and new laws that will help the international filmmakers’ community. To find a way to support companies that are sustainable, and the last one, my personal favorite, to make space for the joy of creation, which is the most important thing”.

Next on the microphone was Marco Gastine from the Greek Documentary Association, who presented the Association’s activities and spoke about the documentary in Greece, among other things. “I would initially like to say that as documentary filmmakers, we must know our material. Our Association is part of the DAE and we are also part of Hellas Doc. Currently, we are fundraising money for our coworkers in Ukraine. Our Association, Hellas Doc, aka Greek Documentary Association, was founded in 2013 and our purpose is to bring together the documentary community of Greece. We have 80 official members and about 250 supporters. We have no source of funding. Only in cases of specific activities we have the support of the Greek Film Center, the Ministry of Culture and Sports, and the Film Festival. Our goal has from the beginning been to support documentary as an independent form of cinema and to promote it abroad. We have four main activities. The first one is education in the form of seminars, masterclasses and workshops, in collaboration with the Greek Film Center – we have a masterclass here on Wednesday (10:00 – 12:00, Stavros Tornes, Agora Docs Masterclass: Order in Chaos – Speaker: Niels Pagh Andersen). The second one is the promotion of Greek documentary across Greece and internationally. The third is lobbying for the producers. In Greece, the sole sources for funding are the Greek Film Center, ERT and EKOME which supports documentaries that have a budget of 60.000 euros. We are interested in supporting the documentary community. From now on, doc lab will take place twice a month, in the form of meetings and masterclasses. The fourth one is international cooperation. Our most pressing issues are funding, since we have limited resources, and of course, distribution. We know how to make a documentary, and with a limited budget, but distribution is hard. We now have our own channel on COSMOTE TV, that mainly consists of historical documentaries. Also, there is no education in Greece about documentaries and it is hard to make co-productions. Our strongest suit is the Thessaloniki Documentary Festival, as well as human resources”.

Afterwards, Lucia Pornaro took the floor: “It is important for us to have a conversation so that we can figure out what we can do on an international level. Doc/It (the Italian Documentary Association) exists since 1999. We have 150 members, including production companies, but also directors, distributors, and film professionals. We are in touch with the Ministry of Culture and other institutions for the issue of documentary funding. One reason for the establishment of Doc/It was that our national TV channel lacked a documentary section. But for the last two years it does. Bureaucracy in Italy is a big thing, yet all things, sooner or later, get done. Our activities are funded by the Ministry of Culture and other funds. We also have an educational program about film production and script writing. Our main goal is to work with our national TV channel and we want to network on a global lever as well. The market has changed. Covid has brought streaming to our lives and this is something we have to deal with”.

The talk continued with Martichka Bozhilova. “I am a film producer and I will present the Balkan Documentary Centre. It is an institution based in Sofia. We started ten years ago, inspired by the need of people from the field to come together and be visible to the global market. We want to be the home of documentary and cinema in the area and to link the Balkans with the rest of Europe. In most of these countries, the film industry is weak. We have two programs with which we try to assist filmmakers with their projects on various levels. For instance, our program for the development of projects has been established for many years and run even when we did not have adequate funding, while we are now supported by Creative Europa Media. One other important program is Docu RoughCut Boutique, which collaborates with the Sarajevo Film Festival. We help projects in their post-production procedure. This year, we accept projects from Ukraine as well. Also, in 2020, amidst the pandemic, we created a festival in Bulgaria that did so well and gave us the strength to carry on”.

Then, documentary producer Józsa László from Hungary, representative of the country’s Documentary Association, took the floor: “We have 113 members from the documentary sector. The Association was founded in 2020, before the pandemic, and the first year was hard for us to show ourselves internationally. Our purpose is to promote documentary in Hungary and internationally. Our budget comes from events and from our members. We also have three film clubs and collect data with resumes from all our members, as well as old films, which we present online. We are a new institution, but we constantly grow. There is money in Hungary, but they mostly go to funding features”.

Selin Murat proceeded to ask the guest speakers why they would want to create a pan-European lobby and what are the challenges they have to face. “There are two challenges, distribution, which constantly changes as it happened with streaming platforms during the pandemic, and the collaboration among various Balkan regions, as well as institutions and film centers”, Marco Gastin mentioned.

According to Lucia Pornaro, “we all feel that the co-production part has to improve. Let’s find something in common and work on it internationally. In Italy, the co-production process takes too long, but firstly we have to think the first steps we need to take in order to get there. The philosophy behind co-production is one of our main goals, but ten years ago it used to be even harder, now many companies plan on collaborating and showcasing their work internationally. We have to learn how to become stronger and achieve co-productions, for instance with France”, Martichka Bozhilova explained. Filmmakers and producers talk, but institutes not so much. They have to be at events like this. I don’t know whether it is realistic or not, but I would like for the institutes of Hungary to sit and talk with, let’s say, the Scandinavian ones”, she concluded.