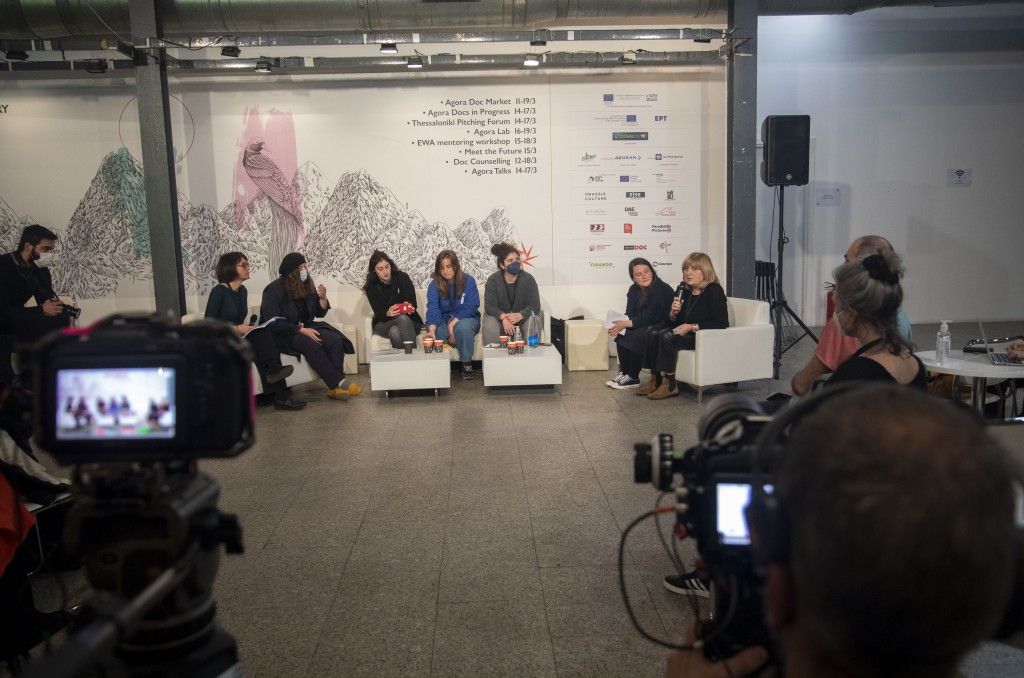 As part of the 24th TDF Agora Docs, the presentation of the section Meet the Future took place on Tuesday, March 15th in Warehouse C. Meet the Future is an initiative aiming at showcasing and promoting the work of emerging talent from our greater geographical region. In this year’s edition, five up-and-coming women documentary filmmakers from Georgia had the opportunity to promote their work via the screening of short clips and shots. The filmmakers that participated in the presentation were: Tamta Gabrichidze, Ketevani Kapanadze, Elena Mikaberidze, Shorena Tevzadze and Maradia Tsaava. The talk was coordinated by producer Rea Apostolides. During the event, a 2-minute extract from each project was screened.

Meet the Future is an initiative organized by the Greek Film Center, aiming at the promotion of emerging filmmakers from the Mediterranean and South-East Europe. This year, we focus on Georgia, showcasing five wonderful female documentary filmmakers”, the host mentioned, before handing the floor to Manana Suradze, Georgian Film Center representative, who provided information about the activities of the organization. “The Georgian Film Center was founded 20 years ago with the purpose of supporting Georgian film production. We support feature films and short films, we organize competitions, we assist the filmmakers and their work to reach international festivals, workshops and masterclasses. I will be at your disposal after the presentation to answer all of your questions regarding the Centre’s activity. We thank you warmly for your support”.

Shorena Tevzadze, a film graduate who has been selected for Berlinale and Sarajevo Talents and has received the best documentary award at Cinedoc Tbilisi, talked about the project The Fortress, which is supported by the Georgian Film Center. “The documentary is in the works. It is about two teenagers, twins, who spend their summer on a fortress on top a lake, which was built by a 55-year-old man. There is a tale about the lake, that at the bottom there is a golden cradle and a boy that will one day be the savior of the whole nation. The owner of the fortress made it on the basis of this myth and organizes relevant events. The camera focuses on one of the boys, who came to the camp to have fun, but is gradually forced to follow the strict rules. Weird situations unfold, a theatre of the absurd”, she said distinctively.

Afterwards, Maradia Tsaava took over, a journalist and documentary filmmaker, who talked about the project titled Performance. “I wanted to bring to the foreground the post-war period in Georgia, the 90s era. After the war, the country found itself in a post-Apocalyptic state. I wanted to focus on the women within this reality and the ways in which they took on such huge tasks. I have archival material from many shows and my film follows one of the protagonists of a performance, who had to move to Italy to survive. I wanted to show the world archival material from my grandmother’s art and the story of a woman who had to sacrifice her art to stay alive”, she mentioned.

Then, the floor was handed to Tamta Gabrichidze, award-winner at Sundance Festival and the first Georgian filmmaker to see her work screened on Netflix, who talked about the project titled Mugamati, which is funded by the Georgian Film Center. “It is a music documentary with mystical elements. A few years back, I discovered a bizarre, small, beautiful garden, where one can see men of age playing an old music instrument. The genre of music they play is not popular these days and this may be the last generation playing that instrument and living that way. The documentary will discuss this culture that will die along with them. That same garden is now a meeting point for younger generations that live differently, that protest in front of the Parliament. It is a clash, but also a convergence, of two generations. The past, the present and the future, coincide”, she said relatively.

Soon after, Ketevani Kapanadze, who made her debut last year, while having been awarded by the Sarajevo Film Festival, discussed her project titled Keren Batok. “The main protagonist is an artist I’ve known for the past eight years. She lives in a small Georgian village, makes post-punk and avant-garde music, and she is also a poet. She does everything by herself, she sets up the scene and records or she gives her parents instructions to help her with the shooting. For her music, she collaborates online with various artists. She is a fascinating character”, she said of the film.

Finally, Elena Mikaberidze talked about the project titled Blueberry Dreams, a documentary from an anti-war perspective, which is a French co-production and co-funded by the Georgian Film Center. “My documentary explores the hopes and dreams of a young couple who live in a divided area. I wanted to show the situation at the borders with Abkhazia. I went to a small village that is at the border and has many points of entrance and control, full of Russian gate-keepers. It is a story about the ways in which war affects imagination. The film wants to send out a message of hope. As filmmakers from Georgia, we think about our collaborators, our friends and all people from Ukraine today. We stand here, asking for peace. We are not naive; we know that documentaries cannot stop the war. We know however, that they can change people’s minds. Let’s find the way to the humanity we all deserve”, she mentioned, while at the end of the event, the five filmmakers held together a Ukrainian flag, sending out a message of hope.