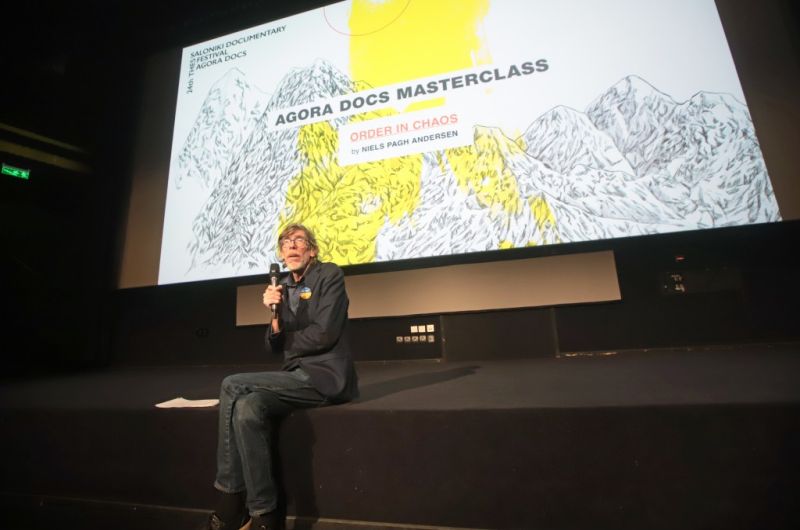 The Agora Docs Masterclass “Order in Chaos”, delivered by Niels Pagh Andersen, was carried out on Wednesday, March 16th, in Stavros Tornes theater. On the occasion of the release of his new book, titled Order in Chaos - Storytelling and Editing in Documentary Films, the internationally renowned Danish editor Niels Pagh Andersen shares his methods and experiences, accumulated over the course of his long career. From 1979, he has edited more than 250 fiction films and documentaries, such as The Act of Killing and The Look of Silence (both Oscar-nominated). Andersen teaches at various professional labs and film schools around the world.

Niels Pagh Andersen is used to working in the dark and hiding behind the director. With the release of his new book, he had to come to the foreground and share his vision with the world. “One of the good things as you get older, is that you acquire critical thinking”, he says, while his view revolves around the concept of authenticity. He rises and observes from above the way we choose to narrate our stories. And the way we choose to do it says a lot about how we see ourselves. During his year-long career, he has learnt to stay interested in not so much the acting, but the cracks acting presents: this is where the magic happens, this is when control is lost. Authenticity is the product of lost control. The magic of a few seconds lost in hundreds of hours of footage. “Documentary people are the poets of the film industry”, he mentions relatively. “Nobody wants us, but we carry on”.

He started with a flashback to the start of his career in editing, and moved on to a historical flashback about the documentary genre. He talked about how his role as a professor enabled him to create a conscience as an editor and to evolve as a professional. He compared the documentary genre to the fiction genre, and referred to the ways in which the rise of the digital era and social liberation allowed for documentary to evolve as a genre and to become popular amongst audiences through television.

The talk was introduced by Elise Jalladeau, General Director of the Festival, who welcomed the audience and the new Greek Documentary Association Jury, as well as the new president Anneta Papathanasiou. She thanked them for their support and their cooperation with the Festival and welcomed Niels Pagh Andersen, “an editing superstar, with films such as The Act of Killing and The Look of Silence in his background, who wrote a book for the art of editing”, she stated and handed the floor to the speaker.

Niels Pagh Andersen has visited Greece many times and is familiar with the Greek documentary landscape. “I am in no case a superstar”, he commented. “I am an editor, usually hiding behind the director in a comfy place. We all love comfy places; we hardly leave them. However, with my book coming out, I have to present myself and communicate my vision”.

His fascination with cinema began at 16 years old, with a famous Danish editor. “I was a young man with a passion for editing. Other people get passionate with music, others with football – I had editing. My first editing for a feature film – my biggest dream back then – was fulfilled at 23. When I was young, I thought the more cuts I make, the better of an editor I am. Now, of course, I don’t believe that. My career skyrocketed relatively fast and I made it to Hollywood. I worked too much, had no private life. Somewhere along the way I lost the passion that used to be my drive and I almost gave up. The creative juices in my brain had been drained”, he stated.

“I was editing documentaries merely as a practice. I was young, I thought that true meaning lied in fiction films. When I turned to documentary, I saw a huge shift in my career. I found meaning, passion… Documentary taught me a lot, mainly that reality is never what it looks like. We are all filled with prejudice, which is reasonable, because we try to categorize and to put chaos in order and to extract meaning from the world that surrounds us”, he said in relation.

He then moved on to a comparison between documentaries and fiction films: “Documentary people always try to tell people something – that is not always the case with fiction films. Fiction is full of fame, money and red carpets – it is a game you have to play, if you wish to survive in this business. People who make documentaries stay by and large humble, which makes sense, since big fiction film directors have to exhibit power and influence on a set of hundreds of people. However, the most interested people I’ve met are documentary filmmakers. At the center of their world was not their ego, but their film”.

About the differences between documentary and fiction films it terms of editing, Niels Pagh Andersen commented: “In documentary you are an organic part of discovering a story, you watch it as it is being born. In fiction, you just try to maintain a balance with the existing script. Fiction films usually pay better and are comparatively easier. Documentaries remain however, more satisfying”.

About his education at his earlier stages, he mentioned: “I never went to film school. At that time, in Denmark, the greatest editor had an assistant to whom he was passing on his wisdom. I was learning by watching my mentor. I loved working with real, tangible film. I had to cut it and put it in order. Now, in the digital era, I never see my assistants!”

Regarding the role of teaching in his evolution as a professional, he said: “About 25 years ago, a shift happened in my career and in my life overall. I started leading workshops, teaching editing however I could: it proved to be a rather important part of my future evolution as an editor. I knew my work had an impact. What I had to do through teaching, was to put into clear words why it had an impact. Teaching gave me the chance to create a new language that describes in clarity what exactly it is I do. My work started to develop a consciousness. I could analyze it. And via this analysis, I managed to develop my skills”.

He moved on to analyze the conditions under which the proper ground was created for his book to be written: “Ten years ago I was offered a teaching position at the Norwegian Film School. I was teaching only 20 days per year, and that gave me time to edit and do research at the same time: I had the tome to see the bigger picture and understand what it was I had been doing for the past 40 years of my life. I got in the process of writing down my thoughts. The seed was this book: a teaching book, but also my personal journey through the world of documentary. It is also about the evolution of documentaries in North-Western Europe during the last 40 years”.

“It is very useful for one to know where they come from, so that they can understand where they’re going”, he said in regards to the history of documentary as a genre. “Documentary started off initially as educational cinema. They were films made primarily by governmental departments, aiming at educating the people, or by private companies for the promotion of some work of theirs. By and large, they were educational in nature, with a simple voiceover, due to the lack of tools at the time. It was exactly those miserable tools that lead the filmmakers of the era to test and broaden the limits of documentary. So, the documentary of the 60s was born, when resistance begins against governmental control. Suddenly, there were new techniques, small and light cameras, 16mm film. Films are more photosensitive and filmmakers are more autonomous.  This is how the era on independent documentary begins, which later on gave way to cinéma vérité, aka observational cinema. Filmmakers made a grand statement: we believe in reality. They looked at it straight – there is truth in that”.

He carried on with the history of the evolution of documentary in the decades that came: “The master of the art, American Frederick Weisman, held a critical role against the institutions. He thought that as filmmakers, we are not but a fly on the wall, observing. He made long films, of 2 or 3 hours, as a reaction to earlier norms. Me, in the 80s when I was editing cinéma vérité, I had a lot of shots and was struggling to categorize them. I learnt that wat to face reality. I admit, I thought it was boring. I was young, I couldn’t add a lot of music, I couldn’t use all the tools I had. Later, the world of documentary started to change in the 90s. The new mantra was “story”: documentaries that approach the fiction style. Fiction film techniques for documentary narration. Younger generations are trained in the documentary genre and interested more in the story than the object. I thus felt a connection with a generation much younger than me. We found common ground in our desire to use a lot of fiction film tools in documentary”.

This exploration of the documentary, coincided with a time in the West when people were released from all social chains. “The epicenter was the individual: at the core, the character. We no longer believe in God, but in Psychology, in an attempt to get to know ourselves”.

He then referred to the main distributor of documentary as a genre to the people – television: “All filmmakers are part of a bigger picture. The main factor in distribution and profit in the field of documentary is still television, which allowed for narration that focuses on the characters. Also, in our time, Film Festivals serve as important vessels and distributors for documentary”. He went on to comment on the challenges posed on the documentary field by the digital era: “We are now facing new challenges. Suddenly, everyone is making movies and documentaries: we all make images and create narratives. We all become, in a sense, interpreters of our own story, and this shows when we find ourselves before a camera: we play a role. The power of documentary is its authenticity. We don’t seek for the acting: we seek for the fault in the acting, its cracks. In documentary, we must navigate and believe in reality”.

“One of the good things as you get older, is that you acquire critical thinking. One of the things I now realize, is that in the future, new forms of expression will emerge, which I will have trouble understanding. I am an endangered species. There are a lot of things I don’t understand. It up to the new filmmakers to push documentary to the front and to try and understand, as I strive to, what it means to be a human on this earth”, he concluded.

You can watch the video of Niels Pagh Andersen's masterclass HERE