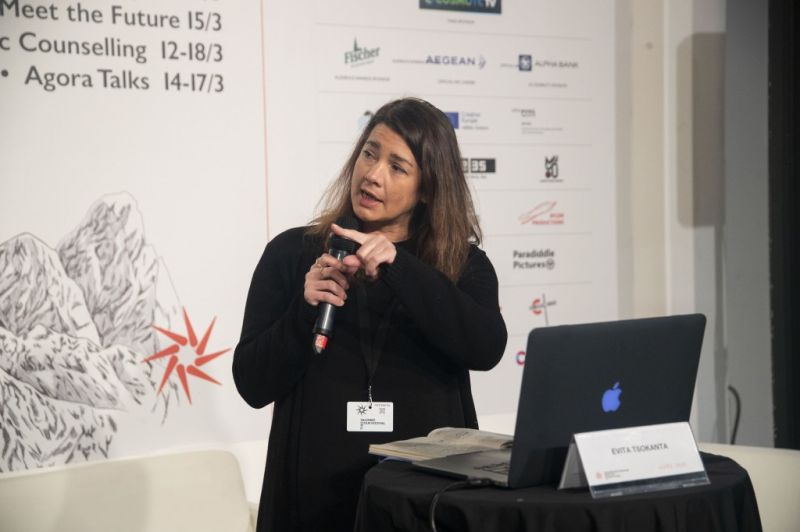 As part of the Agora of the 24th Thessaloniki Documentary Festival, the event “Kickstarter for Documentary Film” was carried out on Wednesday, March 16th, in Warehouse C, at the Thessaloniki Port. The event aimed at informing the audience about the potential and the best practices of funding a documentary by creating a crowdfunding campaign on the popular Kickstarter platform. The main speaker, was the Head of Film, Publications and Arts of Kickstarter in Europe, Evita Tsokanta.

Ms. Tsokanta introduced herself to the audience, and explained initially what exactly Kickstarter is and how it came about. “Kickstarter was founded in 2009. It is a crowdfunding platform that was born and developed by the need for creation. The first three founders, were in fact artists themselves. Kickstarter is a big name in the industry, but the company is smaller than one may have expected. We have less than 100 people working for the company, we are a closely tight team. A few years ago, the company changed legally, it became charitable. This means that we have to maintain a high level as far as the platform’s impact on society is concerned, and to prioritize this criterion over our shareholders’ interests. Every year, we actually throw an event about our endeavors towards this goal”.

As Ms. Tsokanta explained, what makes Kickstarter stand out from other similar platforms, is its insightful expertise in the field of the arts and creation. “What separates Kickstarter from the other platforms is that it focuses merely on artistic activity. The company is actually structured interiorly based on the various departments of creation. There is for instance the Film department, the Visual Arts department or the Music department. And the employees of each department have hands-on professional experience in the arts industry they represent. Let’s say for instance, that the head of the Film department is a documentary filmmaker. This is particularly important. This way, you have the ability as a creator to speak with someone who shares the same language and understands the challenges and difficulties you are facing. With someone who is well familiarized with the community you are addressing as a creator”.

According to Ms. Tsokanta, a second, crucial element that makes Kickstarter stand out, is that its core moto is “All or Nothing”. “If you don’t achieve the goal-amount you have submitted in your campaign, you don’t receive funding, Kickstarter is not compensated and the supporters of your campaign are not charged. This practice, eliminates risk for the supporter. When as a supporter, you contribute to a campaign with a certain amount of money, this amount is just withheld at the bank, there is no amount withdrawal. So in case the campaign is not successful, the money is returned. Respectively, if you see that the campaign is going well, as a supporter you can increase the initial amount you contributed”, she noted.

After informing the audience about the basic elements that compose the company’s profile and the way it functions, Ms. Tsokanta went on to answer the key, as she explained, question that she is asked: who can use the Kickstarter platform? “Anyone, anywhere, can use Kickstarter to support a campaign. The only thing you need is a credit card. However, in order to create your own campaign, you need to be from a specific list of countries where Kickstarter is active, and to have a bank account. If you are not based in one of these listed countries, maybe a partner of yours that is in one of these countries can access the platform, so that you can overcome this potential obstacle”, she noted.

Then, Ms. Tsokanta presented some really interesting points regarding Kickstarter’s performance until today. “From 2009 until today, Kickstarter has collected 6.4 billion euros for creative projects, out of which 521 million are related to Film and 145.5 million are related to documentary. In addition, every year we manage to guarantee a nomination for the American Film Academy awards for one of the films we support. In fact, two of our wins at the awards were for documentaries, in particular for Inocente and Period. End of Sentence. I want, however, to be entirely transparent and honest: 44% of the documentaries that campaigned in 2021 reached their campaign goal. But if the campaign is designed right and the first 25 supporters are in, then the success rate goes up to 74%”, she explained.

As Ms. Tsokanta stated, there are various techniques a creator should follow in order for their campaign to succeed. “I would generally advice the candidate to carefully plan their campaign and strategy, and to devote enough time to the preparation before the beginning of the campaign. I will be honest; it takes a lot of work. What also helps, is being realistic – in terms of both setting up an amount and the project’s needs, but also of the amount of money that we can actually secure via a platform. Often, it is a sensible practice to choose a specific part of our production to fund via Kickstarter, instead of the whole production”, she explained.

Afterwards, Ms. Tsokanta specified her advice per each campaign parameter. As she explained, each campaign has four important parts. The first one is Video. “The video should be short, two minutes maximum. The viewer’s attention span has gradually reduced and continues to do so. Ideally, the documentary director should also appear in the video. I know that usually the directors do not like being exposed on camera, but it does help. Maybe their appearance on the video can be achieved via a voice-over. People can relate to a much greater extent with a person than an idea. The video can also include samples of the project or of previous work and footage by the director”, she explained.

The second essential part, per the speaker, is Text, which should focus on the basic parameters of the project. “The text is often proved to be a challenge for the creators that do not have relevant experience. It should answer some basic questions, such as who you are, what are you making or what are you planning to make, who are your partners, why are you making it and what exactly do you request, what are your needs. My advice to the creators is to be honest in the description. Of course, no one will check what the creator used the money for, however, it is always a good thing to have a sense of responsibility when it comes to this”, she noted.

Moving on, as far as the third crucial part of a campaign is concerned, Rewards, offered as a compensation to those who support funding campaigns, these will have to be, according to Ms. Tsokanta, of a specific number and ideally to form an experience for the supporter of the campaign. “The rewards should amount to between 5 and 7. If more, confusion is created. The usual support amount is 25 dollars/euros. However, the amount of 100 dollars/euros, has been proved to contribute to the faster achievement of the campaign goal. With this amount, the creator has to combine an important reward. It also helps a lot, if the reward forms an experience for the supporter or includes them in the creative process. Experiences are preferred to material objects, which often come with an extra cost of preparation or delivery for the creator of the campaign. By offering an experience to the supporter of your campaign, you actively include them in the creative process and form an audience for your work. The reward experience can include access to backstage footage, playlists or recommended bibliography relevant to the work’s themes, premiere invitations or special screenings. Also, often when it comes to documentaries, a reward is offered to the supporters who have contributed large amounts, at the ending titles of the film. The audience desires and seeks participation”, Ms. Tsokanta explained.

Ms. Tsokanta, offered also technical advice about the fourth and final essential factor of a campaign, Outreach. “Kickstarter offers statistical facts and figures to the creators regarding their campaign. These numbers have to do with the performance of the campaign, the origins of the money and of the supporters. This information is important because it guides the creators, it advices them about what works and about where they should focus and direct their endeavor towards”, she noted.

Besides, as Ms. Tsokanta explained, Kickstarter can assist the creator in other aspects apart from funding, such as networking or the formation of an audience. “Many professionals from the creative and artistic world visit the Kickstarter page regularly, in order to learn about ongoing campaigns. Thus, as a creator, you can attribute visibility to your project via Kickstarter. Also, we often notice that creators come back to set up more campaigns on our platform, having already built an audience for their work. This way, a meaningful connection is formed between the creator and the audience. As a creator, you get the chance to familiarize with your community, to grow your audience, but also to connect with people who believe in your work. You essentially quantify your performance. And those elements can be utilized even after the end of the campaign”.

Concluding, Ms. Tsokanta offered some defining examples of successful documentaries that came to life via Kickstarter campaigns. Some fine examples are, as she mentioned, Joan Didion – The Center Won’t Hold, a Netflix documentary that was supported by 3,565 donors with 221,135 dollars, Push by Fredrik Gerrten, supported by 653 donors with 53,454 dollars, and the music documentary of Laurent Garnier, which started off with 1 dollar as the goal-amount and ended up accumulating 155,320 dollars by 2,715 supporters. Also, indicative cases are the documentaries Knock Down the House, which gathered 600,874 dollars by 11,169 supporters, as well as Period. End of Sentence, which accumulated 45,076 dollars by 358 supporters and won an Oscar nomination.

Finally, responding to a question about the reaction of the Greek audience to crowdfunding campaigns, she explained that she initially had doubts about whether or not the Greek audience would embrace such an endeavor, however the results were surprising. “None of the Greek campaigns we have had so far has failed. That says something important”, she said.