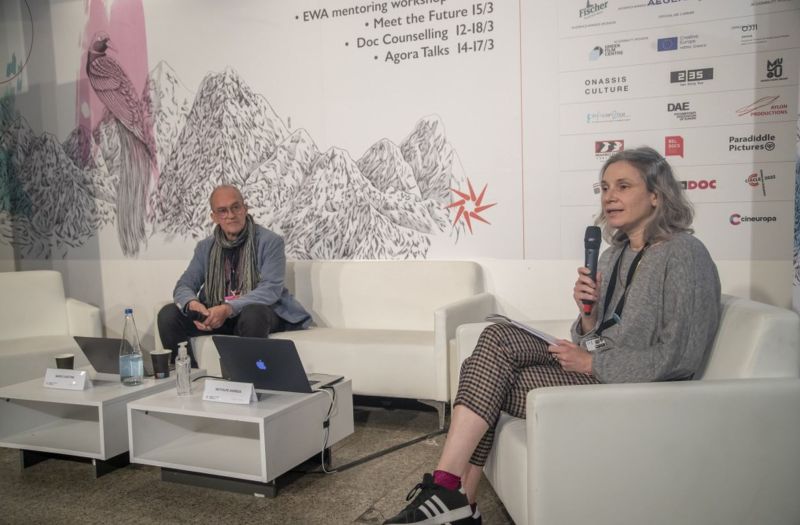 The talk “Meet the Documentary Training Programs” was carried out on Thursday, March 17th, at Warehouse C at the port, as part of the Agora Talks of the 24th TDF. The event provided technical advice for the development of a documentary via European educational programs (MFI Doc Lab, Dok Incubator, EURODOC, CIRCLE Women Doc Accelerator).

Ms. Angeliki Vergou, Agora’s pitching coordinator, introduced the main speaker, Marco Gastine of MFI Doc Lab and welcomed the audience. First, a video from Eurodoc, an educational program for creative documentaries from France, was screened. Eurodoc started over 20 years ago and it is a Pan-European educational program, an empowering tool and an incubator for filmmakers. It conducts three conferences of one week every year, in three different European countries. Also, it offers additional online activities for producers with documentary projects in progress. In every conference, 10-12 producers are welcomed to join an intensive workshop. Every year, as part of Eurodoc, up to 20 documentaries are completed, which go on to premiere in big Festivals around the world.

At this point, Marco Gastine from MFI Doc Lab took the floor. The Mediterranean Film Institute was founded in 2000, initially for fiction films exclusively. It was a big success and realized a lot of scripts. Marco Gastine himself insisted on creating a documentary department. “In previous years, people thought that there is no script in documentaries. You just had to have time, money, and a lot of film. Things have changed. We bring the projects to life from start to finish. We added a documentary lab to the already existing labs for fiction films and TV series. Each lab consists of at least 6 projects”, he mentioned in relation.

The program is divided in 4 distinctive stages. The first conference takes place at the end of June, the second at the end of August, the third in October and the last one at the end of December, in various locations, such as the islands Nisyros and Rhodes but also online.

“It is important to us that the filmmakers’ project is at the right production stage. We work with people who have already thought about how they want to tell their story. We are never dogmatic, there is complete freedom and a sense of cooperation”, he commented. At this point, two previous participants shared their positive experience from MFI Doc Lab.

Afterwards, a video from the educational program Dok Incubator, a workshop in Prague, was screened. Dok Incubator gives the documentary an artistic shape, for the screen and for the market. During the workshop there is a substantial exchange of opinions and experiences. Previous participants claimed that it constitutes a confirmation of quality and that it serves as a useful space for documentary filmmakers who want to perfect their project, especially in post-pandemic times. The program recently celebrated its tenth birthday.

Moving on, Mathilde Andreis presented Coprocity, a platform that serves as a useful tool that brings people from the film industry together. It helps film professionals find projects, collaborators and funding, to build solid partnerships. It works as Facebook and LinkedIn. It helps the professional to organize and present their work digitally. It is a vast, online market that gives the projects life and ultimately a chance for a screening at some event.

Finally, a screening followed, of a video by CIRCLE Women Doc Accelerator, an educational initiative addressing female documentary filmmakers who produce projects of a global scale. It is a new educational initiative that started with the help of Wake Up Films, a production company from Serbia, and Underhill Festival from Montenegro. CIRCLE is designed for talented directors and producers who are making their first documentary feature film, but also for more experienced creators, who will be given the chance to upgrade their skillset. The educational program is divided in three distinctive stages and takes care of additional activities following its completion.