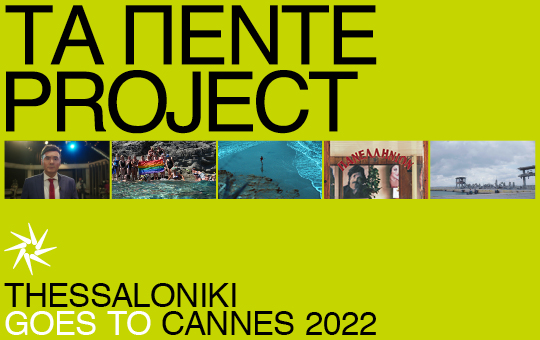 Thessaloniki Film Festival and the Greek Film Centre are delighted to announce the 5 Works in Progress taking part in the action “Thessaloniki Goes to Cannes”, which will be held both in physical spaces and online, within the framework of the Cannes Film Festival’s Marché du Film (17-25 May 2022). The participation of TIFF’s Agora to “Thessaloniki Goes to Cannes” is a result of the partnership between Thessaloniki Film Festival and the Greek Film Centre with the Cannes Film Festival. Greece is the only country in Southeastern Europe and the Balkans taking part in this action hosted by Cannes’ Marché du Film, one the biggest and most high-profiled film markets in the world.

On Monday May 23rd, three Greek fiction films and two Greek documentaries in progress will be unveiled to professionals of the movie industry.

Let’s take a look at the projects:

Panellinion is an out-of-place-and-time chess coffeehouse in the center of Athens; a refuge for people who suffocate in everyday life, who fail to adapt to the conditions of modern life and despise them. Giannis, the owner of the traditional coffeehouse, paradoxically hates chess and thinks chess players are creeps. On the other hand, he has a fatherly affection for his regulars. They are scientists, artists, retirees, and workers who seek outlet and consolation in chess (occasionally an obsession that ruins their lives). In the coffeehouse, they make confessions, recall old stories of legendary eccentric customers with tears in their eyes, roister, drink and sing.

Eressos, a small agricultural village, is also the birthplace of Archaic Greek poet Sappho. Lesbos is one of the few places in the world that decorates its public squares with statues of a lesbian. This affirmation has marked the island as a meeting point for the lesbian community from all over the world. It has also been a source of tension with the locals over name, symbol, space, and belonging. This documentary tells the stories of what this place means to lesbians. It also tells the stories of how the locals perceived and related to these lesbians; and how this changed over the years.

Loukianos is the only son of two superstar actors who passed away some years ago. He lives alone in his tiny apartment, suffers from agoraphobia, stays away from social media and is completely broke. His life takes a swift turn when he receives an unexpected offer from a major TV network to become the new host of their very successful "Late Show". He has one month to lose weight, train to be charismatic and fix his social image by pretending to be in a love relationship with Jenna, an eccentric pop singer- influencer with her own issues.

New Continent is a love drama about the people who wander without a compass. The ones who are constantly trading without rules, wear the role of "evil", but in reality, they survive by sulking between the most infamous streets of the capital. Above all, though, it's a dead-end love story.

Iris and Ariel are 17-year-old twins, brother and sister, who live with their mother and older sister Lia near a beach full of mollusks, birds, and reptiles. The teenagers have grown up isolated from the mainland, in a sibling relationship that surpasses the common bounds and with a transcendental connection with nature. A new world beyond the ocean appears as a promise and Iris decides to leave, and travels for the first time to the city. Shopping centers, noise, the quest for an absent father, the separation from her twin and her mother’s absence mark her journey toward her recognition of the importance of her love for her brother and sister and her identity, linked to their island.

The Festival is looking forward to hosting the Greek premiere of these films at the 63rd Thessaloniki International Film Festival and the 25th Thessaloniki Documentary Festival.