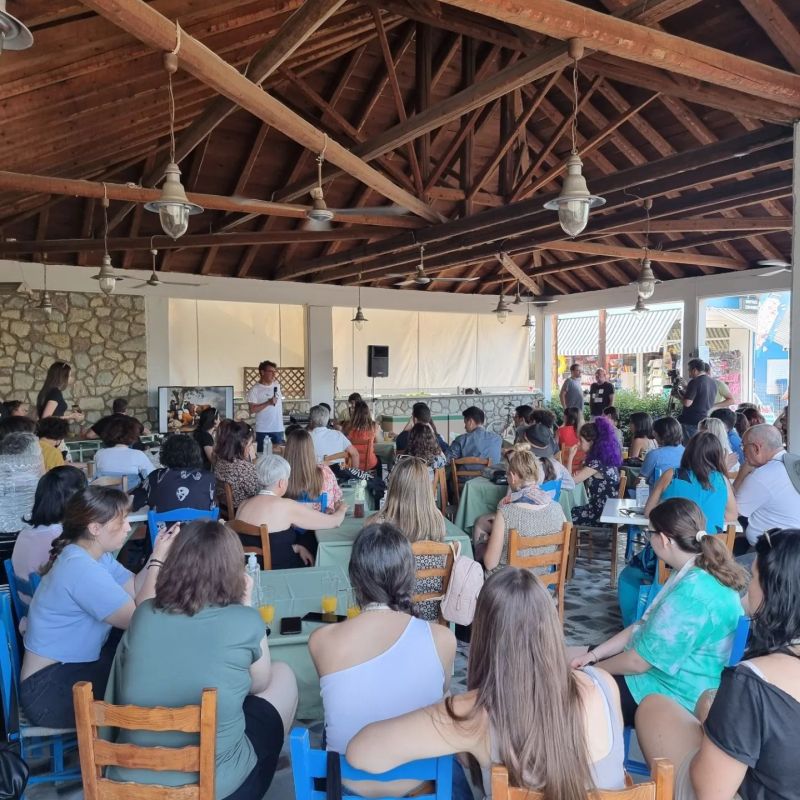 In the framework of the Evia Film Project (June 15 – 19 2022), the Thessaloniki International Film Festival’s artistic director Orestis Andreadakis gave a masterclass on Thursday, June 16th, in Agia Anna for the students of the the Department of Digital Arts and Cinema of the National and Kapodistrian University based in Psachna and for film professionals.

The artistic director of the Thessaloniki International Film Festival welcomed the students and the professors, while he thanked the Ministry of Culture and Sports, the the Region of Central Greece, the Municipality of Istiaia-Aidipsos and the Municipality of Mantoudi-Limni-Agia, as well as the sponsors and the supporters of the Evia Film Project.

The masterclass, titled “The Bull, the donkey and the Octopus: The environment from painted documentaries to cinematic painting” run through the history of the visual tradition to examine how contemporary film narratives reveal new modes of connecting with nature and learning from more-than-human beings. At the same time, the masterclass recorded and revealed through examples, the relationship of humans with animals, as it is documented in the history of cinema, art, and in reality.

“Recently there has been a lot of talk on octopuses. The Thessaloniki International Film Festival was the first to talk about them through the documentary My octopus teacher. The film was presented in a global premiere on July 15th 2020 in four summer theaters of Thessaloniki, before it became available in Netflix and before its triumphant run to the biggest distinction, the Academy Award for Best Documentary. Today we will examine how a donkey, a bull and an octopus shake the established hierarchy of all living beings, openly questioning the belief that man is the Chosen One” said in his opening statement Orestis Andreadakis.

Mr. Andreadakis continued with a historical review of famous works of art that connect with an invisible thread different eras of human history and artistic creation. From the famous 17th-century painting The Young Bull by Dutch painter Paulus Potter to the frescoes of the Minoan palaces in Knossos depicting the bull-leaping (taurokathapsia), Robert Bresson's film Au hasard Balthazar to the prehistoric paintings in Lascaux Cave, Mr. Andreadakis mapped the timeless bond that unites people and animals, while commenting on the harmful practices of the modern food industry.