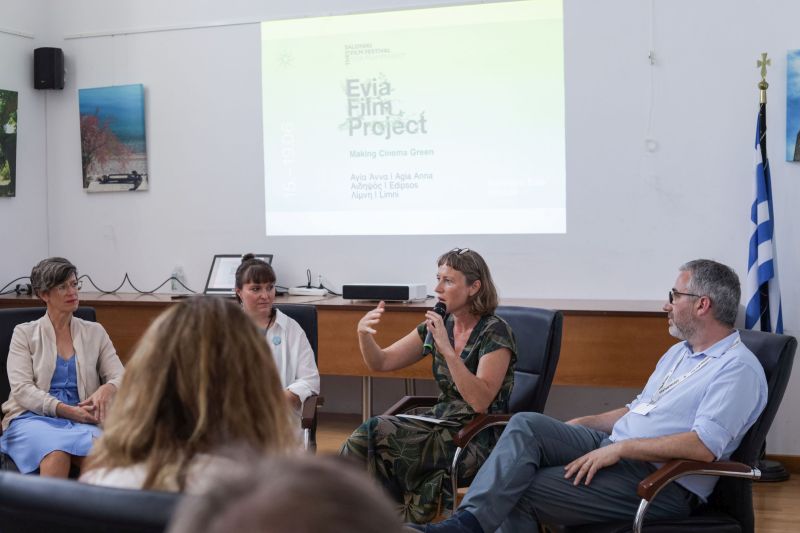 Within the framework of the Agora’s actions for the Evia Film Project (June 15-19, 2022), an open discussion on green film production was held on Thursday June 16th, at Mela Building, in Limni. The event titled “Don’t be afraid of the Green Deal: Simple tips & smart actions”, top-notch professionals from the movie industry shared their experiences from working in green productions that abide by sustainability practices. Prior to the event, the General Director of Thessaloniki International Film Festival, Elise Jalladeau, welcomed the speakers and the audience, highlighting the importance of hosting an environment-oriented event less than a year after last summer’s disastrous wildfires. Konstantinos Aivaliotis, Agora’s coordinator, took the floor, presenting the event’s speakers and expressing his satisfaction over the materialization of a collective effort that took up several months of groundwork. The talk’s moderator, Ieva Ūbele, producer from Latvia and Head of Industry at Beldocs Festival, briefly unveiled the discussion’s topics.

“We thank you all for your presence. It’s a huge challenge for all of us to find the proper way to convey to the audience all the complicated issues with regard to green film production. In the first part of the discussion, we will delve into the theoretical framework, while in the second session, we ’ll have the chance to discover the ways through which theory is transformed into action,” mentioned Ms. Ūbele, before unfolding the history of the term “sustainable development”. “The term entered our lives for the first time through the Brundtland report published by the International Commission on Environment and Development. The term’s content can be summarized in the covering of today’s needs without undermining the needs of the future generations. The two main guidelines for sustainable development in our times are United Nations’ 2030 Agenda, which has consolidated 17 goals of sustainable development, and EU’s Green Deal, which aspires to achieve climate neutrality by 2050. As a producer of environmental docs, as well as head of a residency program in Latvia, I can assure you that if we transform awareness to a personal priority, it is easier to transform it to an everyday professional habit. The way I see it, it is preferable to set small-scale and applicable goals, rather than attempting to change everything all at once, starting from recycling and waste sorting, all the way to limiting transportation and going vegan. Today’s awareness is the guarantee for a brighter tomorrow.”

The torch was then passed on to Dietlind Centa Rott from Austria, Film Commissioner, Green Film Consultant and head of the Evergreen Prism program, and Nina Hauser, Green Film Commissioner and Green Film Consultant at the Austrian Film Institute and member of Eurimages’ study group for Green Filming. Dietlind Centa Rott initially mentioned that the issue of sustainability gained ground in 2019, as interest was limited in the past. “The sustainability issue demands a global approach and is highly political. Everything applied in Austria may not be transferred directly to your country, but you may draw inspiration from our example, to find the solutions suitable to your case. As a member of a regional film commission in Austria, I assure that wonders can occur even in a smaller scale, as long as we invest on thorough planning. In 2018, we created Evergreen program, which evolved into Evergreen Prisma in 2020. It is an international and interdisciplinary initiative, aiming at weaving a wide network of collaboration through a close contact with think tanks and working groups. One thing is sure, though. In order to incorporate sustainability into film production it is necessary to resort to a specialized and educated staff,” was her introductory comment. Taking the floor, Nina Hauser underlined the importance of a holistic approach, which will get all official bodies and institutions, as well as every professional, involved. “Even though we lack official data, film production can be held accountable for the 2% of carbon dioxide emissions, trending upwards. The goal is to move on the triple axis of know-how, awareness and efficacy. We must provide the necessary knowledge to all field professionals, as well as to the younger generation of producers. From our part, we have done everything possible to craft a network of communication and synergy, pitching for the involvement of green consultants in film production. In addition, we have established a carbon calculator for film productions, as well as the Austrian Eco Label, granted to all productions that meet environmental criteria. It goes without saying that green film production cannot become a tangible reality without funding motives, which are bound to enable the promotion of green projects. By calculating with precision the carbon footprint and handprint of each film production, we are taking a crucial step towards the goal of climate neutrality within the film industry,” she mentioned.

Dietlind Centa Rott stressed out the importance of consolidating the role of green consultants in the film production landscape. “It is a new, up and coming and promising profession, with a great dynamic, building a channel of communication with the respective bodies both within and outside the movie industry network. Moreover, I would like to point out that it is necessary to include sustainability in all steps of film production, starting from the development stage all the way to shooting, post-production and distribution. Green consultants are assigned to record everything, keep track with all departments, propose solutions, get in contact with bodies and institutions, and conduct an overall report, laying out the objectives, the problems, the accomplishments and the obstacles. For the time being, we have published two guides for green film production, including advice and guidelines, while our goal is to establish the obligatory presence of green consultants, as well as the commitment to record emissions in every film production. Since April 2020 we have been hosting educational tutorials on how to conduct an overall report,” she concluded. Wrapping it up, Nina Hauser informed the audience that the unification of data on a pan-European level is under way for 2023.

Italian film commissioner, Alberto Battocchi, took the baton, presenting the profile of Trentino Film Commission. “The Trentino area, even though a mountainous one, has many similarities with Evia. They are both areas that count on local production and the benefits of tourism. Green Film started out as a pilot program in 2017, aiming to encourage film producers to adopt an environmental approach. In the beginning, we had a down-to-earth ambition for the program’s appeal, but were surprised to see that since the very start, about 50% of the productions that had reached out to Trentino Film Commission had also applied to Green Film. In 2019, we had to reshape our program to “export” it in other areas of Italy and abroad”, he mentioned in his opening statement before presenting the key pillars of Green Film.

“We have set up a system of environmental evaluation that leads to the granting of green certification. Our goal, at least in the present stage, is to focus on the main stage of production and not on post-production, offering clear and comprehensible instructions to producers, aiming to enhance our professional habits, but most of all to cultivate a different mindset. The areas we place emphasis on are energy consumption, transportations, catering, waste sorting, For each of these branches, every film production is graded separately through a point system, giving producers the chance to choose where to channel their attention. The minimum grade for receiving the certification is low, as it is an adjustment period for everyone. The certification, besides a recognition of efforts, offers the opportunity to apply for programs and incentives. The procedure is rather simple. Prior to the shooting of a film, the green manager conducts a sustainability plan, the producer submits the application, the ruling body verifies that all criteria are met and the certification is issued.” Alberto Battocchi concluded by mentioning that similar bodies in the rest of Italy, as well as in Europe (Norway and Belgium) have adopted the green protocol of Green Film, with slight moderations and alterations, also preluding the creation of a specialized program destined to documentaries.

The second session kicked off with the Lebanese producer Myriam Sassine, who shared her experience from the production of the film Costa Brava, Lebanon. “First of all, I would like to mention that the movie echoes the 2015 events, when a strike that lasted one and a half month had literally flooded Beirut’s streets with waste and garbage. One of the mentors of the Torino Film Lab played the most pivotal role to our decision to turn to green film production, urging to shoot the film in accordance with its message. Of course, such an endeavor is highly difficult for my country’s standards, as we lack the proper infrastructure. Finally, our film was the first fiction film to be accepted in Doc Society’s Good Pitch program, receiving the necessary aid to elaborate a green protocol. Green activists gave us a helping hand both for the film’s script, as well as for the measures that had to be implemented. Throughout the shooting, an eco-manager was always present on set. Moreover, we received grants from three different German bodies that allowed us to hire special consultants. The procedure was rather simple, even though it was hard to convince everyone to adopt to the new standards. No miracles occurred, but we surely took a first step towards opening new roads for the movie industry in Lebanon. We drastically cut down on plastic waste and overall garbage, while trying to minimize unnecessary transportation. Our immediate plans include collaborations with schools, where we will present our experiences in the form of case studies, as well as a partnership with an environment-oriented festival held in the north part of the country. I must point out that the presence of a green consultant is more than necessary. Striving to keep up with tight schedules, in a stressful condition, it is easy to let go of the green protocol,” she concluded.

German producer Titus Kreyenberg closed the round of speakers, clarifying that his personal experience is different, as he comes from a country where green awareness has been consolidated both on social and political level. “In German productions, we implement a green protocol in all levels: we refrain from using generators, we have innovative lighting methods at our disposal, we avoid using cars, we opt for the train rather than the plane, we place special bins everywhere, waste sorting is automated, we even hand out portable ashtrays made of organic material. Nevertheless, we have to always keep in mind that green film production should be accompanied by financial benefits or at least meet the standards of financial viability. Moreover, allow me to stress out a contradiction on the way film productions are promoted by the respective bodies, as it is clear to me that film tourism does not go hand-in-hand with green film production. In addition, we should come up with a formula that would allow us to include extra costs in the overall budget though incentives and facilitations. As a producer I want to see every penny spent making a difference in the movie. I had been a consistent eco activist, but I am not willing to compromise a director’s vision for the sake of green certificate. However, I can assure your that going green is far easier than it sounds”, he wrapped up.

In the curtain call of the discussion, movie industry professionals who attended the event shared similar experiences and concerns, while Alberto Battocchi stressed out the importance of directors and producers taking center stage as their words can have a greater impact than the ones of the official bodies that revolve around a more theoretical level.