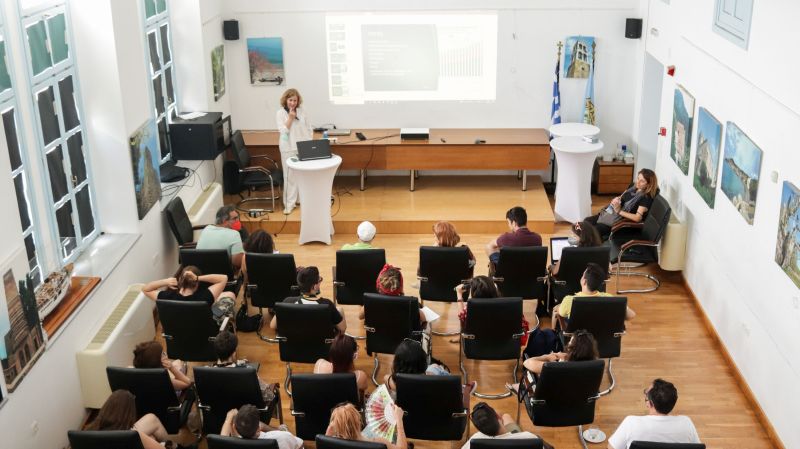 Journalist Katerina Christofilidou, who has been dealing with environmental issues presented on Saturday in the Mela Building in Limni a masterclass titled “News reporting for an environmental film – a practical guide”. The masterclass was organized by the non-governmental journalistic organization iMEdD, in the framework of the Evia Film Project.

At the beginning of the masterclass, Ms. Christofilidou thanked iMEdD and the Thessaloniki Film Festival for inviting her, noting that she is aware that for many TV seems not to have the value that cinema has, but It is a medium addressed to the wide audience that sometimes does not visit cinemas. “What we are trying to do is inform people and make way for the people to understand a constantly changing world” she noted, adding that the information should be disseminated in order for us to know what we should do to protect ourselves.

Although she said that all opinions must be heard, she thinks that the opinion of a scientist that who cites research data and someone who denies climate change and believes conspiracy theories cannot have the same weight.

She then mentioned the climate change, saying that at 90% of it is man-made. We are not talking about an interaction with nature, but about a destruction of nature.

She also said that natural resources have become a stock market product, with many people exploiting them as they wish. Speaking about the effects of the climate change, she said that the degradation of the environment leads to a degradation of the quality of life. She added that the serious social problems created by the destruction of the environment should not be forgotten by someone doing environmental news reporting. She noted that as a journalist she is trying to show different aspects, so that we can find a measure of sustainability that will allow us to live and ensure that the next generation will find something to inherit.

Ms. Christofilidou said that the climate is creating a new order, underlying that the issue of natural resourses is important in the discussion for climate change and that the issue of food security is linked to natural resources. At the same time, according to WHO, the climate change brings closer pandemics and epidemics, while it increases morbidity. People will die from diseases that will appear again or for the first time or that will intensify. We have to revisit the economic model on which we have based our culture, she said whle mentioning overconsuming.

Moving on to the issue of energy poverty, she said that there are a lot of people globally who cannot afford the cost of energy and that is an issue connected with climate change and with human rights.

Then she talked about mega-fires and mentioned the Northern Evia forest fires. Speaking about the burned areas, she became emotional and said that for a lot of people their work was connected to the forest. This forest will not take one night to be rebirthed, it will take 30 years. She said that it is very important that the Evia Film Project takes place in this area and that the organization will help to bring visibility to environmental issues.

She then spoke about the importance of education. Talking about how to build a news story on mega-fires, she said that journalists study the time a fire begun. Journalists always ask meteorologists about the conditions of prolonged drought, about the fuel that exists in the area, about the high thermal load, the prevention measures, the forest-settlement mix or the education of the citizens. She added that a journalist examines responsibilities and risk assessment. As journalists and cinematographers we should not ignore the next day she noted, stating that the next day is about rehabilitation, social cohesion and the local economy.

Ms. Christofilidou mentioned that the protection of the environment is not a matter of conscience, but there is a framework of rules that we must follow. She went on to cite the sources journalists can use for their work. The power of image and of the correct documentation is really important for highlighting these issues. Concluding the masterclass, she said that citizens and journalists should have their eyes open, in order to be the ones that set the rules.