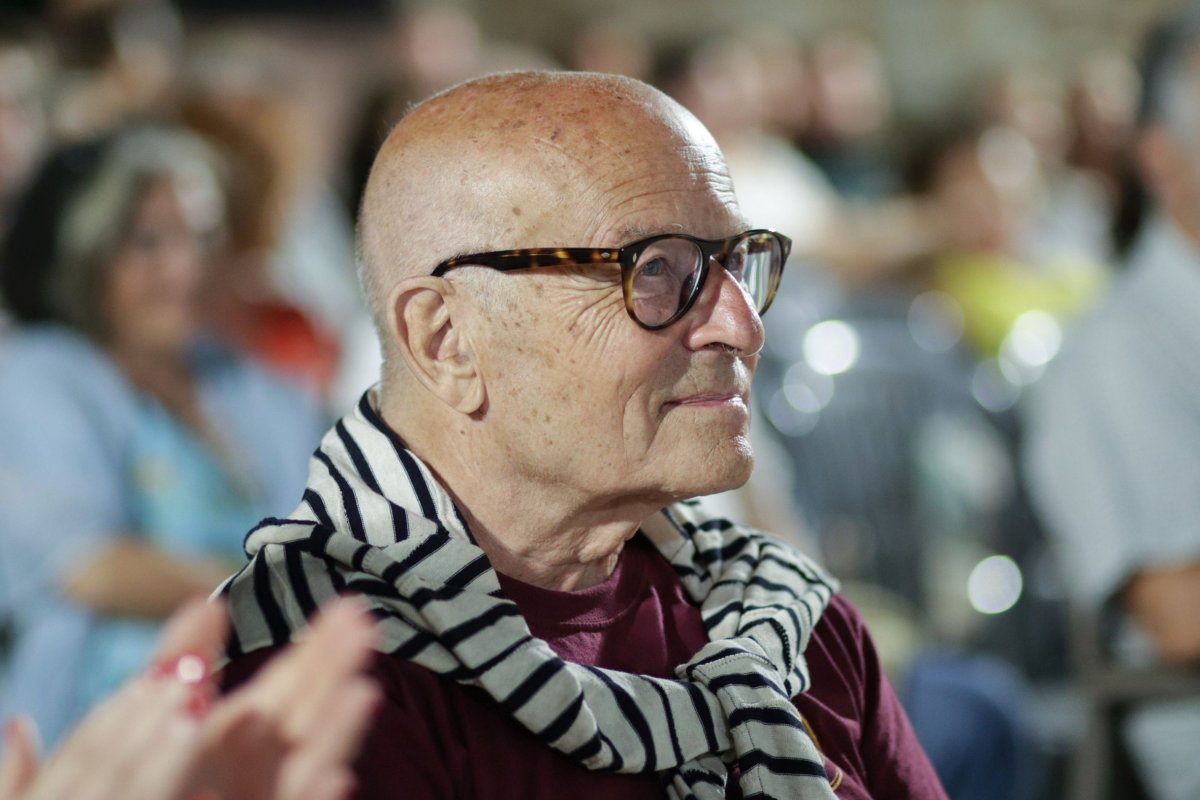 In an enthusiastic and emotional ambience, with the presence of the Academy Award winner Volker Schlöndorff, the first Evia Film Project called it a wrap with the closing ceremony that was held on Sunday June 19th, at Ciné “Apollon”, in Edipsos. The closing film was no other than The Forest Maker, a documentary by the legendary German director, who honored Evia Film Project and the closing ceremony with his presence.

The General Director of Thessaloniki International Film Festival, Elise Jalladeau, was the first to take the floor, welcoming the audience. “This evening rightfully belongs to Volker Schlöndorff, whom we thank for this great honor. Before giving the floor to cinema itself, allow me to thank you all, in this welcoming and hospitable place. I would also like to thank all Festival’s staff for pulling off a seemingly impossible task. The entire Festival’s team is hoping that the seed we planted this year will bear fruit in the future. Next year, in good health and high spirits, let’s all meet again here”, she mentioned.

The baton was then passed on to Thessaloniki Film Festival’s Artistic Director, Orestis Andreadakis. “There could be no better film to wrap up Evia Film Project’s events than The Forest Maker. A documentary that brings forth the love for forests and the necessity of their existence and longevity. Everyone has now become aware of how much we have suffered from our forests’ perishing. Even yesterday, yet another forest was under threat here in Evia. However, before watching the film, which will surely teach us a lot, on behalf of the Festival I would like to thank the Ministry of Culture and Sports, the Region of Central Greece, the Municipality of Istiea-Edipsos, as well as the Municipality of Mantoudi-Limni-Agia Anna. We have made two new friends, dear Yannis Kotzias and dear Yorgos Tsapourniotis. Moreover, I would like to thank all our sponsors and supporters, but most of all this wonderful area’s shop owners, working people and residents”, said Mr. Andreadakis before making a brief homage to the great career of Evia Film Project’s distinguished guest.

“The director of The Forest Maker is one of the most renowned names of world cinema, a living legend of the moving image. He started out his career in the 60s, when alongside Reiner Werner Fassbinder, Margarethe von Trotta and Werner Herzog, founded New German Cinema, a movement as influential as the French Nouvelle Vague, which changed the way we shoot and watch films. He has 40 fiction films, TV movies and documentaries under his belt, many of which are adaptations of top-notch literary works. The Young Törless by Robert Musil, Coup de Grâce by Marguerite Yourcenar, Swann Love based on Marcel Proust’s In Search of Lost Time, The Death of a Salesman based on the titular play by Arthur Miller, The Tin Drum by Günter Grass, recipient of both the Palme d’Or and Best Foreign-Language Film Academy Award, Voyager based on Homo Faber by Max Frisch”. Mr. Andreadakis went on to make mention to the prolific actors Volker Schlöndorff has worked with during his career.

“In the last two films of this long list, the art director was no other than our own Nikos Perakis, who -apart from reshaping the landscape of Greek comedy- is also a remarkable set designer. We are so happy to have him with us tonight. Volker Schlöndorff has worked alongside a series of brilliant actors, such as Angela Winkler, Bruno Ganz, Hanna Schygulla, Alain Delon, Jeremy Irons, Fanny Ardant, Fay Dunnaway, Robert Duvall, Sam Shepard, Julie Delpy, John Malkovich, Dustin Hoffman. Ιt is our great honor to welcome to Northern Evia this unique director, this active citizen of the world, this remarkable person,  ladies and gentlemen please give a warm applause for Mr. Volker Schlöndorff”, he concluded, as he invited Mr. Schlöndorff on stage.

“Thank you so much for this invitation. I could never have anticipated being here. As I was shooting The Forest Maker in Africa, I was watching on the news, as the entire planet did, the horror taking place in Evia, thinking I should be there making a film. Of course, I could have never imagined that I would end up presenting this film here, in a wonderful open-air theater, under the stars. It is as if fate brought us together. Let me say that not only forests are in danger. Cinema and movie theaters are under threat, too. Today’s audience is probably the biggest that will ever watch this film in a cinema. It’s wonderful to share your work with the audience. That is the reason for making films in the first place”, mentioned Mr. Schlöndorff in his opening statement.

Following the end of the screening, Mr. Schlöndorff conversed with the audience, answering questions concerning The Forest Maker, his career and cinema as a whole. Initially, Mr. Schlöndorff referred to the use of different expressive means in The Forest Maker. “Going into cinema in the 60s and the 70s, I was inevitably influenced by Jean-Luc Godard. I never considered it weird to mix black-and-white and color, fiction and documentary, intertwine genres and techniques. The diversity of the film’s expressive means matches the complex nature of the African continent. Nothing was planned before-hand though, I just had to adapt along the way. For instance, animation was a convenient solution for a subterranean scene, as it would be impossible to dig a hole and place the camera underground. I contacted a local graphic designer to that purpose, a member of the Tuareg tribe, who helped me out. I am also a great fan of pioneer documentary filmmaker Jean Rouch, who used camera as an instrument of contact, what he called “caméra de contact”. In The Forest Maker, the camera eliminates the awkwardness of the speakers, making them feel as if they were speaking to you, the audience, instead of me”, he explained.

“Homogeneity in this film would contradict the infinite diversity of Africa, which includes 54 different countries and more than 300 spoken languages. In every country where the documentary takes place, I teamed up with a different cameraman and a different sound designer. It’s rather obvious that each of them, apart from having a different equipment, has a different mindset and temperament. Along the way, I met many African filmmakers, asking them to each make a little contribution to the film. In an ideal world, the movie would consist only of their material, and I would just build an overall mosaic. However, the purpose of the film was to showcase the work of Tony Rinaudo, whom I met by chance in a conference and decided to make a film dedicated to his actions, as well as to present a different view of Africa compared to the Western stereotyped gaze. In tandem with the film you just saw, which is addressed to a non-specialized audience, there’s also a 40-minute version of educational character, made exclusively for farmers. Unfortunately, it is rather difficult for the African audience to watch the film. Cinema-wise, there’s nothing but multiplexes, screening American blockbusters and the African TV would never be interested in such a documentary. Nevertheless, even if farmers don’t watch it, the politicians might do or those who outline political strategies, as well as all of us, who are the ones to elect governments. Nowadays, growth and development is on everyone’s lips, but from my standpoint, we have to turn to agriculture, on a worldwide scale, as it is the source and base of everything”, he commented.

Answering a question from the audience, as to whether he has developed a more optimistic take on things along his career, Mr. Schlöndorff denied having been a pessimist. “The very act of shooting a film, writing a book, painting a portrait, is a display of optimism. There’s nothing pessimist in sharing. After all, if the Africans refuse to fall in despair, we have no right to give up. This evening, where all of us are gathered here, discussing al together on cinema, the forests and nature, is the most adamant proof that we can make a difference”, concluded Volker Schlöndorff, receiving a warm applause from the audience.

Evia Film Project makes part of the specially designated developmental project “Fotodotes”, for the reconstruction and restoration of Evia following the disastrous summer 2021 wildfires, planned and executed by the Ministry of Culture and Sports. Evia Film Project was carried out thanks to the support of the Region of Central Greece and the Greek Film Centre, in collaboration with the Municipality of Istiaia-Aidipsos and the Municipality of Mantoudi-Limni-Agia Anna. Thessaloniki Film Festival teamed up with all institutions that have their seat in Evia, the Department of Digital Arts and Cinema of the National and Kapodistrian University based in Psachna, and Chalkida Greek Documentary Festival.