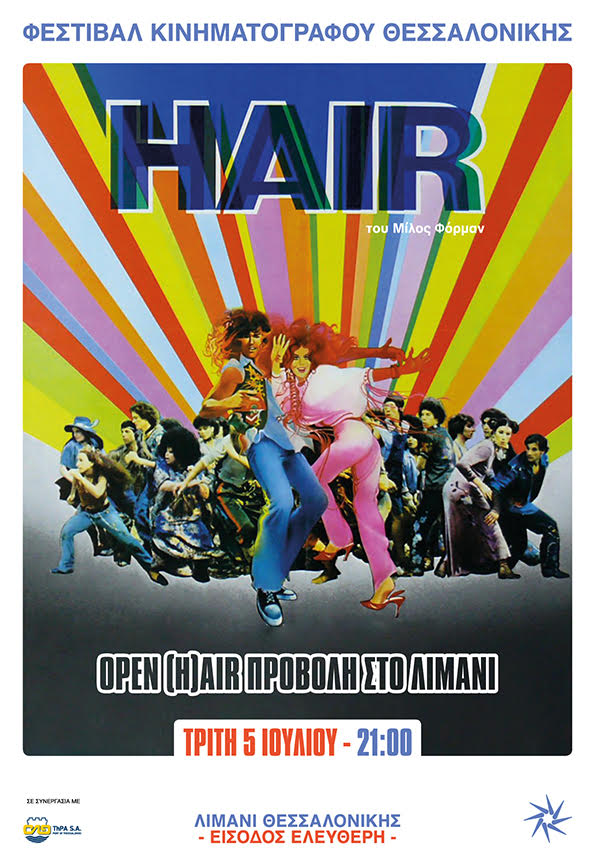 The Thessaloniki Film Festival invites us all to unforgettable movie experiences, in the most beloved spots in Thessaloniki: The Port and Aristotelous Square. Let us all enjoy the magic of musicals, during two summer, starry nights.

On Tuesday, July 5, 2022 we meet in the Port, to watch the famous anti-war musical Hair (1979) by renowned Czech director Milos Forman. Hair is about the life of a group of hippies that celebrate love, not war, at a time when the USA was experiencing the Vietnam War. The film was nominated for two Golden Globes -among them for Best Comedy or Musical-, as well as for a César for Best Foreign Film. Hair is a fresh approach to the turbulent ’60s, a beautiful film, filled with love, wonderful music and unique choreography.

In September we celebrate the beginning of the new movie season with a night full of music, dancing and colors. The musical The Young Girls of Rochefort (1967) by Jacques Demy will be screened in Aristotelous Square. A bittersweet story, it takes place in the port of Rochefort, where lovers meet, reconnect or separate. The music is written by Michel Legrand.

Admission is free for both open-air screenings!

Claude Bukowski leaves the family ranch in Oklahoma for New York where he is rapidly embraced into the hippie group of youngsters led by Berger, yet he's already been drafted. He soon falls in love with Sheila Franklin, a rich girl but still a rebel inside.

Two sisters leave their small seaside town of Rochefort in search of romance. Hired as carnival singers, one falls for an American musician, while the other must search for her ideal partner.

The screening of Hair is taking place in collaboration with the Thessaloniki Port Authority.