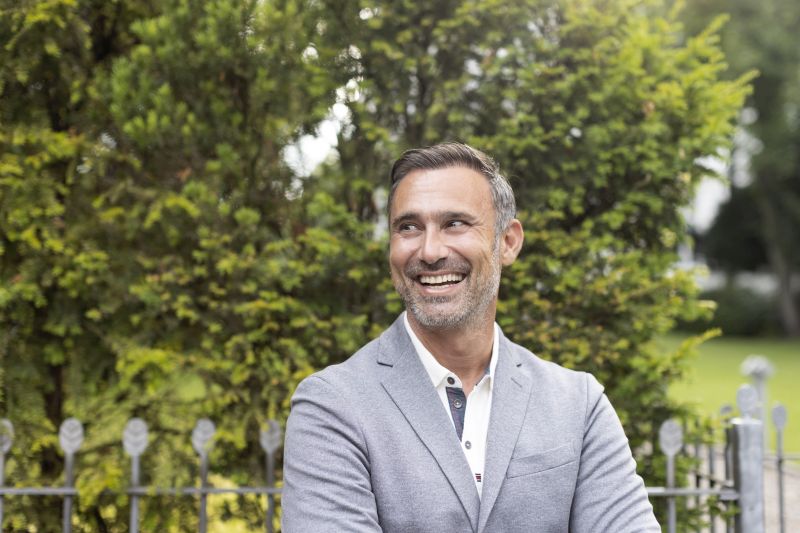 
Yorgos Kapoutzidis is the new ambassador of Agora, which branches out to the field of television

Featuring beloved script writer, director and actor Yorgos Kapoutzidis as ambassador, unveiling the newly established Agora Series section that grabs the pulse of our times, with  Angeliki Vergou as its new head, along with pioneering activities and initiatives in support of Greek cinema, the Agora of the 63rd Thessaloniki International Film Festival (3-13/11/2022) is getting ready to welcome once again the Greek and international film industry in Thessaloniki.

As Agora’s ambassador at the 63rd Thessaloniki Festival, Yorgos Kapoutzidis will promote all substantial activities that pave the way to tomorrow’s cinema, while taking on the task of communicating the pivotal role of Agora to filmmakers, journalists, as well as to the audience.

In this year’s edition, Agora is breaking ground with new actions and initiatives, extending its range beyond the professionals of the film industry and reaching out to all cinema-lovers. Through its new sections Agora Series, the Festival dares to touch upon the relation between cinema and TV and delve into the affinities of the two fields, while hosting a masterclass of the TV script writer and producer Victor Quinaz (Big Mouth, GLOW of Netflix, among others), titled “Don’t be scared, it’s only TV!”. In addition, through a series of think tanks it seeks suggestions and hopes to trigger changes for the purpose of offering support to the national and European film industry community.

In this year’s Festival, as every year, the Festival’s Agora is boosting Greek cinema by hosting a series of new activities and initiatives that aim to offer useful advice and tools to all debutant upcoming professionals of the film industry. In addition, Agora showcases a series of fascinating discussions featuring distinguished speakers and guests.

Let us take a brief glance at the actions hosted by the 63rd TIFF’s Agora:

Agora, the Festival’s most dynamic and developmental branch, has served as the jumping-off point for many of the most successful films of recent years. The 63rd TIFF’s Agora, held this year from November 4 to November 12, 2022, has been continuously supported by the Creative Europe-MEDIA program, bestowing awards in services and cash prizes. Agora’s digital library is back, in collaboration with Cinando platform, offering accredited professionals the chance to watch online more than 200 selected films featured in Agora and the 63rd TIFF’s program.

The 63rd TIFF’s Agora is launching in November 2022 this newly established section, in collaboration with the Greek Film Centre, with the aim of setting up a network of communication with the professionals that create series for TV networks and platforms, but also to serve as a steady meeting point and springboard for future actions that would contribute to the field’s further development.

This year’s kick-off includes networking actions and discussion panels giving the floor to speakers, professionals and artists of the series production from both Greece and abroad. Agora’s new section rallies up Greek and foreing producers, creators of series for TV networks and platforms, as well as representatives from networks of national and worldwide scale. In particular, the Agora Series section will be honored by the presence of Faye Tsitsipi (Cosmote TV), Konstantinos Bourounis (ERT), Konstantinos Sousoulas (Mega Channel), George Pofantis (ANT1) and Yannis Donos (ANT1+). In addition, the list of speakers includes the people behind some of the most successful series of the last few years, such as Lefteris Charitos (Agries Melisses), Vardis Marinakis (Siopilos Dromos), Katerina Mpei (Ta kalytera mas hronia) and Christoforos Papakaliatis (Maestro). Moreover, acclaimed professionals such as Fenia Cossovitsa (Blonde - The Other Me, Tehran), Ioanna Davi (Indigo View - To nisi, Commandos and Dragons), Dionyssis Samiotis (Tanweer - 42°C) and Orestis Plakias (Foss Productions - Milky Way) will share their experiences from working as TV series producers, alongside Markos Holevas, President of the Board of Directors of the Greek Film Centre.

The international community of content production for TV networks and platforms will be represented by prominent producers from abroad. The panel, hosted in collaboration with the Greek Film Centre, includes Italian content manager Veronica Vitali, representing Netflix, British Sam Hoyle from Sky Studios (Broadchurch, Doctor Who), UK-based Julien Leroux, executive producer of the TV series Tehran, Serbian Boban Jevtić of Firefly Productions and Peter Nadermann from Germany’s Nadcon production (The Bridge). In addition, the audience will have the chance to attend a masterclass on the creation and development of TV content delivered by the renowned American script writer and producer, Victor Quinaz.

The event will call it a wrap with the special screening of COSMOTE TV, where the audience will be given the chance to watch in avant-premiere the third’s season first episode of the Greek mega-hit series The Other Me, at Tonia Marketaki theater, at 10pm.

With the script writer and producer Victor Quinaz

On November 5, 2022, Thessaloniki Film Festival is setting in motion a series of three hybrid Think Tanks, having as goal to incite the active participation in the wider discussion, to trigger related and relevant topics and issues, to exchange views on the impending challenges, but also to offer useful support to other European film markets - regardless of their size and impact - that are willing to touch upon this grave question and seek answers: Film Markets should keep on operating in the same way? What course of action would signal a meaningful change?

Crossroads Co-production Forum aims at offering support to the fiction films producers connected to the regions of the Mediterranean and Southeastern and Central Europe. The producers of the selected projects will have the chance to showcase and discuss their projects with co-producers, distributors, sales agents and top-notch pundits of the production field.

The Crossroads Co-production Forum projects of the 63rd TIFF’s Agora are the following:

LIFE IN A BEAT

LOVER, NOT A FIGHTER

Eight films will take part in Agora’s Works in Progress section, which will be held both physically in Thessaloniki and online. The participating films are at the stage right before their completion and will be showcased to the invited professionals of the film industry. Agora’s Works in Progress section hosts screenings that are exclusively addressed to Agora’s accredited guests and presented to the producers, sales agents, distributors and Festival representatives that will attend the 63rd edition of TIFF. This way, the above-mentioned film industry professionals will be given the chance to be the first to single out movies from the Mediterranean, Central Europe and the Balkans that have entered the last stage before their completion.

The films of the Agora Works in Progress are the following:

THE SEA AND ITS WAVES

*This designation is without prejudice to positions on status, and is in line with UNSCR 1244/1999 and the ICJ Opinion on the Kosovo declaration of independence.

Meet the Future section is the Festival’s initiative that builds a bridge between Greek Cinema and Agora, aiming at bringing forth each year a different branch of Greek cinema’s professionals, by promoting their work and providing valuable tools for their pitching and networking in the international stage. In this year’s edition, the torch is passed on to some of the most highly praised names of young and upcoming actors and actresses, who have already made their first steps in Greek cinema and are bound to find themselves in the spotlight of attention in the years to come.

All Meet the Future participants will showcase their work to Greek and international Agora accredited professionals via self-tapes on Wednesday November 9, in an event that will be hosted at Warehouse C, and will go on to take part in a three-day acting workshop, while having the chance to attend the tribute’s masterclasses. Meet the Future’s acting seminar will be delivered by Aulona Lupa, graduate of the Athens Conservatory Drama School and founder of the Acting on Camera Seminar, the first intensive and fully rounded acting on camera seminar in Greece.

The participants will have the chance to come in contact with top-notch professionals of the field, receiving invaluable practical tips for their next steps and more particularly for the transition into full-length film production. Agora Short Film Lab instructors will share their precious experience and knowledge on the different stages of the filmmaking process, such as the script, the production, marketing, as well as the pivotal role of sales agents. In addition, they will provide guidelines on pitching and networking, as well as useful information on the European programs targeted to film production. The participants will also be given the chance to attend the Festival and the full spectrum of Agora’s activities, as well as to exchange views and experiences with colleagues and acclaimed guests from Greece and abroad.

Thessaloniki Locarno Industry Academy 2022, an important collaboration between the festivals of Thessaloniki and Locarno that celebrates its seventh consecutive year, renews its appointment with TIFF once again! In this high-intensity program, top-notch professionals of the international stage will share valuable knowledge and experience with eight participants from Greece and abroad through discussions, presentations, case studies analyses and group projects. The individualized training offered by the program will enable participants to broaden their professional network in the fields of international sales, marketing, distribution and film programming.

Agora Talks are back in action with a series of exciting talks and presentation that aim at offering accredited professionals the tools and tips to better comprehend and cope with issues such as:

A glance at the ambassador of the 63rd TIFF’s Agora

Yorgos Kapoutzidis was born in Serres and studied Law at the Aristotle University of Thessaloniki, the city where he first came in contact with theatre as a member of the Thessaloniki French Institute’s theatre group. He rose to fame as both actor and scriptwriter through a number of TV series (Savvatogennimenes, Sto Para Pente and Ethniki Ellados) where he starred in and wrote the script. His most recent work, titled Serres, is currently screened at ANT1+, featuring as the first Greek series of the new platform. Over the last years, he has been actively engaged in theatre, both as a playwright and a stage director. His sophomore play, 42497, is staged at theatre IVI in Athens. In addition, he has teamed up with the National Theatre of Northern Greece, as his debut play, Whoever wants to break up, let's raise a hand, ιs scheduled to premiere at Vasiliko Theatre.