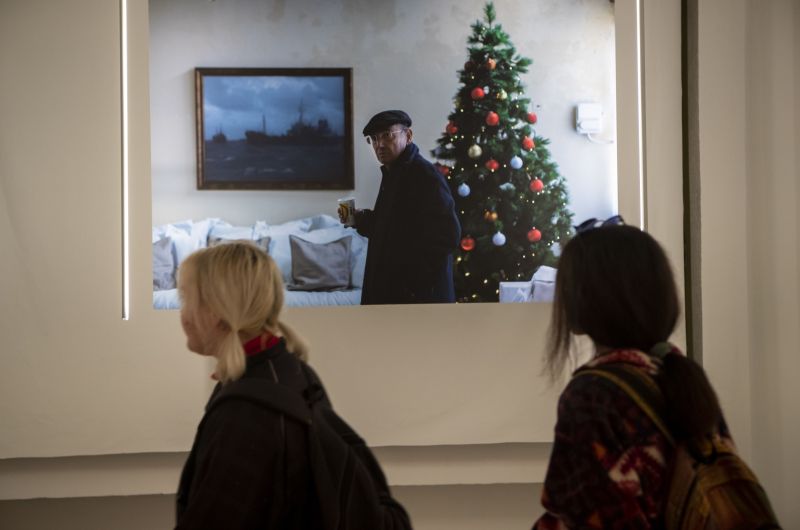 On Saturday November 5th, the Festival’s two exhibitions kicked off, hosted within the context of the grand tribute to Theo Angelopoulos, on the occasion of the tenth anniversary since the death of the legendary Greek auteur. The Festival’s Artistic Director, Orestis Andreadakis, after welcoming the guests, took the floor to thank the people who contributed to the materialization of the two exhibitions. More specifically, he thanked MOMus and Thouli Misirloglou, art historian and Deputy Director, all partners of the Festival and especially Thanos Stavropoulos, “who always organizes our exhibitions with so much love”, the Port of Thessaloniki, the Municipality of Thessaloniki, as well as the family of Theo Angelopoulos.

He also made a special mention to the name of Angelopoulos’ daughter, Eleni, which she shares with the main protagonist of the film Reconstruction that stands as a source of inspiration and the core idea behind this year’s Festival. “It is Eleni who runs through almost the entire film and comes directly from 1970 to us, in order to tell us some very important things, to reveal some secrets and in that way to complete the homecoming, to return to Angelopoulos’ work, here at his favorite port. This is also accomplished by the exhibition of photographs from his last and unfinished film, The Other Sea, which we titled “The ‘Sea’ at the Port”. The photographs of this exhibition were taken by Nikos Nikolopoulos, who is also with us here today”.

Mr. Andreadakis then referred to the other aspects of the Festival’s tribute to Theo Angelopoulos. First, to the screening of the documentary To Each Their Voice; Theo Angelopoulos & Nikos Panayotopoulos, directed by Antonis Kokkinos and Yannis Soldatos, which brings to light an unknown and fascinating conversation between the two prolific filmmakers. Then, to the universally accessible screening of the film Reconstruction (1970), the great Greek director’s debut film. Finally, to the special two-language edition of the Festival, dedicated to Theo Angelopoulos, which is already available at the festival shops. In his closure, Orestis Andreadakis referred to the song at the background of the main exhibition “Anaparastasi: Reconstruction, Reenactment, Reconstitution”: “The song playing in the background is “Kontoula Lemonia”. It may trigger some memories to anyone who knows that it was Theo’s favorite song, as well as to all those present at the 1st Cemetery of Athens on that sad day”.

MOMus-Experimental Center for the Arts

In addition, the 63rd TIFF will showcase an exhibition featuring the photos taken by Nikos Nikolopoulos, who worked as an on-set photographer in the film The Other Sea, during the shooting of which Theo Angelopoulos passed away ten years ago. Nikolopoulos’ photos take us to the core of the artistic act and of Angelopoulos’ vision, shedding light on the unseen aspects and moments of an iconic filmmaker. Moreover, the exhibition stirs even further everyone’s imagination with regard to an unknown and half-completed movie that will remain forever linked to the unforeseen and shocking death of a unique director.