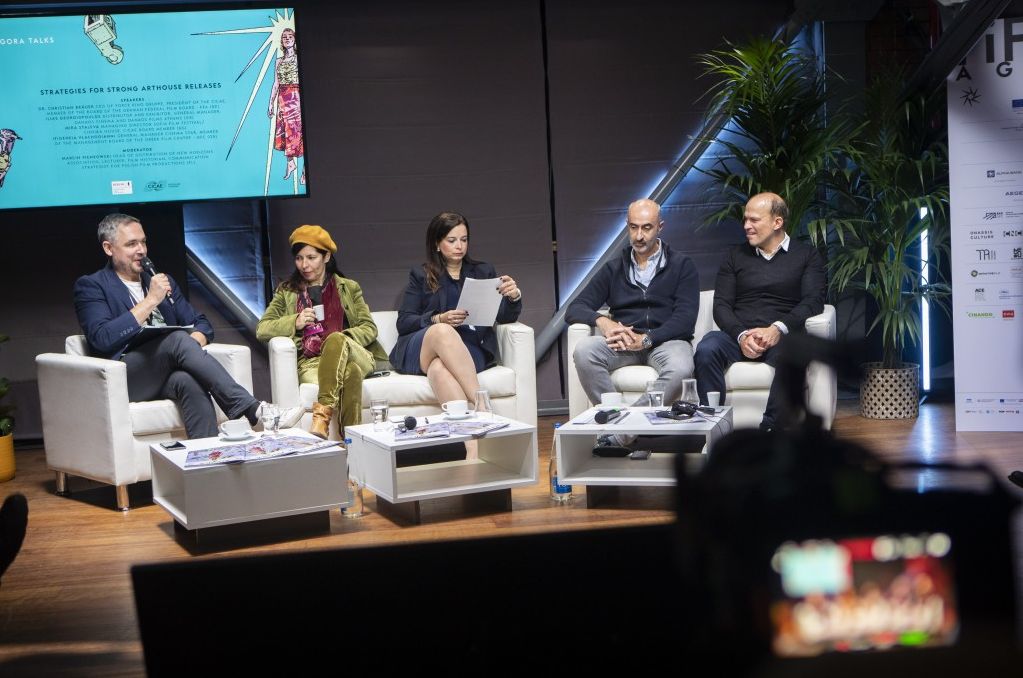 In the context of the 63rd TIFF Agora Talks, a panel on the “Strategies for successful arthouse film releases” was carried out on Sunday November 6th, at MOMus-Thessaloniki Museum of Photography. The panel consisted of the speakers: Dr. Christian Bräuer - CEO of Yorck Kino Gruppe, President of the CICAE, Member of the Board of the German Federal Film board - FFA, Ilias Geogiopoulos - Distributor and exhibitor, General Manager Danaos Cinema and Danaos Films, Mira Staleva - Managing Director Sofia Film Festival/Cinema House, CICAE Board Member, and Ifigeneia Vlachogianni - General Manager Cinema Star, Member of the Management Board of the Greek Film Center - GFC, while Marcin Pienkowski - Head of Distribution of New Horizons Association, lecturer, film historian, communication strategist for Polish film productions, coordinated the discussion.

The floor was initially held by the Festival’s general director, Elise Jalladeau, who welcomed the panel speakers by thanking them for their presence. The talk was initiated by Marcin Pienkowski: “We have representatives from various countries and markets, from Bulgaria, Greece, Poland and Germany, and I would like to first talk about the general state of the film market and cinema in each country. What has changed and what kind of challenges are we facing?”. According to Mira Staleva: “Even though I come from Bulgaria, not many kilometers away from here, our market is very different from the Greek one. We have not yet reached the point we were at before the pandemic. As for festivals and premieres, people attend these events but do not visit cinema theaters on a daily basis. Bulgaria does not have many movie theaters dedicated to arthouse films. In Sofia we have six and in big cities such as Varna, we have only one. The lack of such movie theaters is inevitably connected to a lack of distribution”.

As Ifigeneia Vlachogianni mentioned later: “We have a family business of three cinema theaters in Veria and I can tell you that the market is hard because no films were shot during the pandemic, which resulted in cinemas shutting down. We have to come up with strategies to bring back the audience, as well as with a way to improve the circulation of arthouse films so that everyone involved can benefit. We all have to work together in order to have the best results possible”. The floor was then offered to Ilias Georgiopoulos, who agreed with Ms. Vlachogianni, by saying: “We notice a huge fall in traffic regarding viewers visiting cinema theaters. During the pandemic, there were only a few films and distributors were reluctant to release them. And I myself, as a distributor, was very careful about my choices. I had a film, The Worst Person in the World, which I was advised to release in March, but I did not want to, opting to wait until July, when the film had a huge impact. Overall, during the summer season, open-air cinemas do a lot better in Greece compared to the winter cinemas”.

Christian Bräuer then stressed that: “Trends are changing in Europe. Every country is different. And in Germany, the film market is hard. We had a difficult winter last year because of the pandemic. People would not go to the cinema and many films were postponed. As for arthouse films, there was a 20% fall. In the past months, the situation seems to be changing. Audiences return to the cinemas and especially during the summer. I notice the numbers changing for the better for countries like the UK, France but also Germany, even though we still have not reached the pre-pandemic levels. Young people are mainly those who return to cinema theaters, but in Germany there is a lack of arthouse films for young people and we face a big price increase due to inflation”. About the state in Poland, Marcin Pienkowski mentioned: “We saw a small improvement this year. Our festivals and premieres do very well. This is a trend I notice everywhere, so maybe the screening of a film should become an event. I agree that young people visit the cinemas much more now, something very optimistic, but at the same time we have a lack of an audience over the age of 50, who were in fact the most loyal audience in the pre-pandemic era”. He also raised a question to the speakers about what the strategies should be for an even better approach of young audiences, but also how they will bring back the viewers of an older age.

According to Christian Bräuer: “We want all ages, but this is the time to focus on young people. They are the future, without this meaning that we will not screen films for an older audience. We focus a lot on communication via social media, mainly via TikTok and YouTube. Simultaneously, we have to take into account who lives in our neighborhood so that we are aware of who our audience is. For instance, there is a huge Asian community in Berlin, and when we focus on that, the films we screen are sold out”. Ilias Georgiopoulos agreed. “Our cinemas are located at the city center of Athens and there, there is a big community of residents from the Philippines. But only one or two screenings appealed to this specific audience. It is not easy to host events all the time because they involve a lot of work and sometimes they produce results, sometimes they don’t, but you have to keep trying. In October we hosted the Athens International Film Festival and it was a big success with young audiences. However, after the event, the young audiences disappeared”.

What audiences do we want in our cinemas? And how much do we want to spend for the promotion of the screening films, Ifigeneia Vlachogianni wondered and explained accordingly: “It is hard for small cinemas to survive against the multiplex. They have to also screen premieres. So, we must ask what do the distributors want. Every distributor wants to gain the biggest profit possible from the release of a film. This means the use of marketing and publicity sources and the selection of an opening date that does not coincide with, for instance, any important sports event, during which the people stay in watching TV. I do not agree that we are only interested in younger groups, since we also want older people included in our audience. We have to get them up from the couch with free screenings and competitions. The lack of films during the pandemic and the lukewarm start of 2022 has led the owners of cinema theaters to become more aggressive in terms of the marketing strategies they apply. They have become more innovative regarding food and beverage deals and more flexible regarding the content they present on the big screen. And let’s not forget that local arthouse cinemas are also often meeting points for local artistic communities.”

According to Mira Staleva: “We should not exclude elder audiences and we have to bring them back. To see what they need, not only in small towns but also in bigger ones. Young people require a different approach. I believe cinema should be in schools. It depends on the vision of politicians of course. I do not comprehend why cinema is not taught in schools, like literature. Cinema is a language. If we combine emotion and experience, people will go to the movies. Distributors and producers must work together for the better outcome”. As Ilias Georgiopoulos added: “We try to hold a lot of screenings with the director or the producer present, to which the audience responds very well. We have to make the viewer feel like cinema is an experience and not merely the screening of a film”. According to Christian Bräuer: “Education is really important and I agree with Mira. Everything around us is changing. We live in a digital world and we communicate through there. If people like a film, they post about it”.

The talk then focused on the speakers’ success stories. As Ilias Georgiopoulos mentioned: “We founded our distribution company in 2014, with the Italian film Viva la libertà, which was a great success in Greece because it was released after the elections. Open-air cinemas are very popular in Greece and part of the tradition. Previously, they only screened films that were released in the winter, but now they screen new films as well. Danaos cinema has been active in the Greek market for the past 50 years, with two theaters of 530 and 100 people capacity, at the center of Athens. Danaos Films specializes in the distribution of arthouse and independent films from around the world, but with a focus on European production. Anesis cinema is an open-air cinema of 200 people capacity”. As for the strategies required for a successful arthouse film release, he stressed: “Create a unique marketing and distribution strategy, such as a calculated release date, define and target your audience, spend money with caution and define your goals. One successful film screening of ours was the film The Worst Person in the World, with 20,000 tickets. We had female influencers post articles with titles like The girl in the film is you. We made the message direct and personal. Another successful screening was the documentary about Rony James Dio, the person who replaced Ozzy Osbourne in Black Sabbath. It was only one screening for one night. We collaborated with the most popular heavy metal magazine in Greece, Metal Hammer, for the promotion of the film. The theater was full, we gave a lot of beers and it was like a rock concert. In addition, the Greek film Amercement was a great success as it was screened as soon as cinemas were open again”.

“We gave out wine instead of beers at the screening of a documentary about Dali, which was really successful”, Mira Staleva added. “It is always the classic films that are successful with young audiences and when I say classic, I mean from the 90s onwards. We have strong releases from time to time, but not for arthouse films, and here is where collaborations between cinema theater owners and distributors is useful”, Christian Bräuer mentioned. Ifigeneia Vlachogianni established Wednesday as the day of discount tickets and wine offer. “On the first night we had 10 people, the next one a few more, and by the end of the month the room was overcrowded, the audience was drinking their wine and discussed issues that are not easy to come to the surface, especially in a small city”.