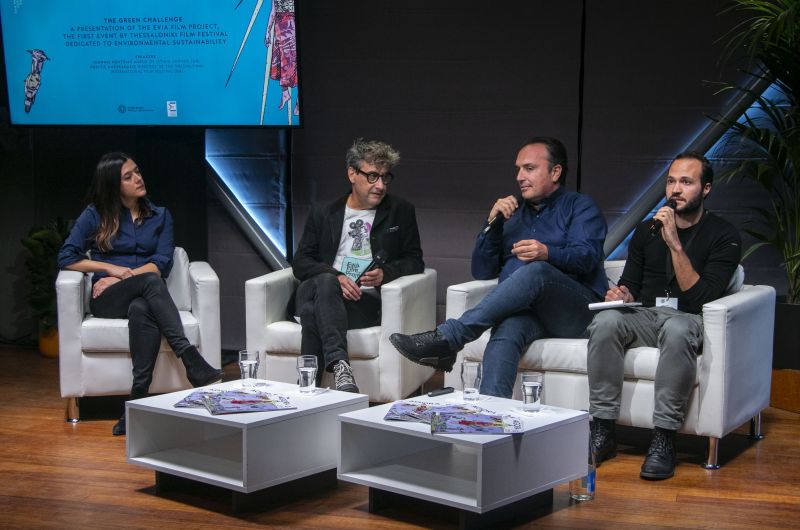 Mr. Andreadakis kicked off the presentation by stating: "Evia Film Project was an idea born out of an emergency and urgent need, but it is here to stay. It was a journey focused on environmental protection and "green" practices. It is part of the reconstruction effort of northern Evia after the devastating fires in the summer of 2021, but it is developing into something even bigger: a “greener” way of producing films and organising festivals and actions that we hope will last for many years on. It was, I think, the first festival to be organised in a completely ecological way, both in terms of films and projects and in terms of the production of the festival. For us, Evia Film Project is not just another festival, it is not another action related to the film industry, but an act of love we share with the local authorities and the local community of Evia".

Giannis Kontzias, the Mayor of Istiea-Edipsos, then took the floor and expressed his gratitude for Mr. Andreadakis’ kind words: "It is true that since we met, we were very close, we were committed in helping you organising this action as a team and support you in this very nice initiative. We truly felt that we were dealing with real people, real friends. You came up to us after the most difficult moment in the modern history of our country, the environmental disaster in August 2021. In order to understand the size of the disaster, we have to mention that it was the biggest forest fire in our country in the last 200 years. The effort to reconstruct Northern Evia, and more precisely the Municipality of Istiea-Edipsos, which I represent here today, is a universal effort the state mechanism contributes to, but also the entire society, with the culture world leading the way. The people of culture expressed their solidarity from the very start, but Thessaloniki International Film Festival came to us in an orderly and organised way with a very warm and realistic proposal. Evia Film Project fits perfectly into the way we have grown up. Growing up in a green environment, surrounded by virgin and sustainable forests, we have learned to see the world green. Thus, Evia Film Project is the one that suits better than any other in Northern Evia and Edipsos and we really want it to become a long-standing institution. So, we will do everything for this action to be held in Evia this year, next year and in the future. We will do our best to help it become a modern think tank for the environment, the fight against environmental crisis and the climate crisis, to turn Evia into an example of bad practice, so that no-one imitates Evia in the dealing with forest fires, but also an example of good practice in the reconstruction of a place affected by such a disaster. I bear in mind that Evia Film Project is an act of love given to us by you all and is our strength to continue in the future".

Ms. Doxiadi then took the floor, evaluating the Evia Film Project effort: "It was indeed the first step of Thessaloniki International Film Festival towards a greener and more sustainable identity. It was about a collective decision that we consider Evia Film Project as the first step towards our goal. The way the project worked offered us quantity data to reduce the environmental footprint of the Festival, as well as quality data, which cannot be considered in terms of numbers, but as a long-term impact".

Right after, Ms. Doxiadi presented the quantity data collected with the completion of Evia Film Project and announced the "green" practices adopted: "In terms of the way the festival worked, we focused on areas we could control, unfortunately, not the totality of them, but this is part of growing as a Festival. We focused on zero-waste practices, with Polygreen, a circular economy company, we collected and recycled waste; we also focused on sustainable water consumption thus avoiding the use of 2,600 single-use plastic bottles. As a result, we prevented the emission of 150.8 kg CO2 into the atmosphere. In addition, we tried to regulate the transportation issue, the Evia Film Project was held in three different locations and we tried to move from place to place mostly by bus. We also tried to promote public awareness. Concluding, I would like to mention that the reduction of the environmental footprint, in the context of Evia Film Project, reached the level of 7.8%". The event ended with the screening of a two-minute spot dedicated to the first edition of Evia Film Project.