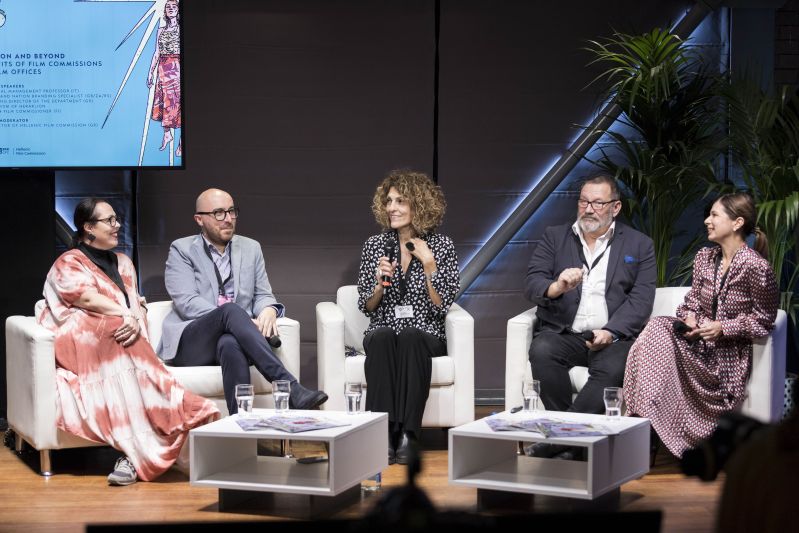 Within the context of the Agora Talks of the 63rd Thessaloniki International Film Festival, the discussion “On Location and Beyond: The Invisible Benefits of Film Commissions and Film Offices” took place on Tuesday November 8th, at MOMus – Thessaloniki Museum of Photography. The event focused on the location guide for the Region of Central Macedonia, in collaboration with Film Office – Central Macedonia. The coordinator of the event was Maria Koufopoulou (GR), director of the Hellenic Film Commission and the speakers were Marco Cucco - Cultural Management Professor (IT), Martin Cuff - Creative Industries and Nation Branding Specialist (GB/ZA/RS), Eleni Vougioukalaki - Acting Director of the Heraklion Department of Tourism (GR) and Teija Raninen, Film Commissioner (FI).

The coordinator welcomed the audience and invited the speakers to begin the discussion. Initially, Marco Cucco from the University of Bologna, had the floor. “There is not one whole story about Film Commissions, but rather many smaller local stories. During the 1930s, in Utah, USA, a stock breeder went to LA, with the purpose of suggesting to producers to shoot a western on his property, which he thought of as a suitable scenery. And he was right, because his property was on Monument Valley, which has since become a trademark of the western genre. The shootings were, of course, beneficial in terms of the economy of the region, which decided to create a Film Commission. Other USA states (New York, Colorado) followed, while in the 1990s, the phenomenon made it all the way to the northern European countries (Germany, Belgium, Scandinavia), for financial reasons of course. They saw it as an investment and from that moment on Film Offices expanded across Europe. Today, it seems like each region has its own film office and it is impossible to accurately say how many of them exist”.

After a question by the coordinator, Mr. Cucco clarified that Film Offices begun in a spontaneous way and not because of a favorable or facilitative legal framework by the EU, while they work mainly with the assistance of local supportive structures.

Martin Cuff then took the floor and presented a series of benefits associated with the Film Commissions:

Afterwards, Teija Raninen, film commissioner from Finland, took the stage: “In Finland, all Film Offices are located outside the capital, and this showcases their local character. In our case, we think of the financial and working benefits. We have an exceptional film school at Turku, and this motivates young people to stay and not move to the capital. We try to improve and promote the local community. We bring in job opportunities for freelancers and filmmakers. We fund not only the film, but indirectly, also the development of businesses. We bring in talent to our region through the wide global network we carefully designed. Because Finland is like the construction of a cruise ship – it needs a wide network for its construction and has eventually a huge impact”, she mentioned accordingly. At this point, Mr. Cuff underscored the depth of the relationships that occur between Film Offices and the locals. Immediately after, the coordinator handed the floor to Eleni Vougioukalaki.

Ms. Vougioukalaki emphasized the importance of the tourism industry in Crete and the extent to which it facilitated the creation of a backdrop for the local Film Office: “Jules Dassin chose Crete to film Celui qui doit mourir, exactly because he was offered there the best deal compared to any other place in Greece. There are many people who visit a location just because it was at one point a shooting location for a film. Of great importance is also the bond between the filmmakers and the locals. Local people can mediate and assist in many ways. Especially during the pandemic, many films and series were shot at the island of Crete, and the local community was welcoming and willing to help.” Summing up, she commented on the fruitful collaboration with local institutions that comprehend the importance of shooting on the island. “Assistance is not always of exclusively financial nature; it is often related to transportation or hospitality. It is crucial to educate the local society so that they can contribute on a technical level as well, so that film crews don’t have to come from Athens”, she added. Finally, in an open discussion with the audience, there was mention of the importance of sharing the outcome of the shooting with the local community (for instance, through free public film screenings).