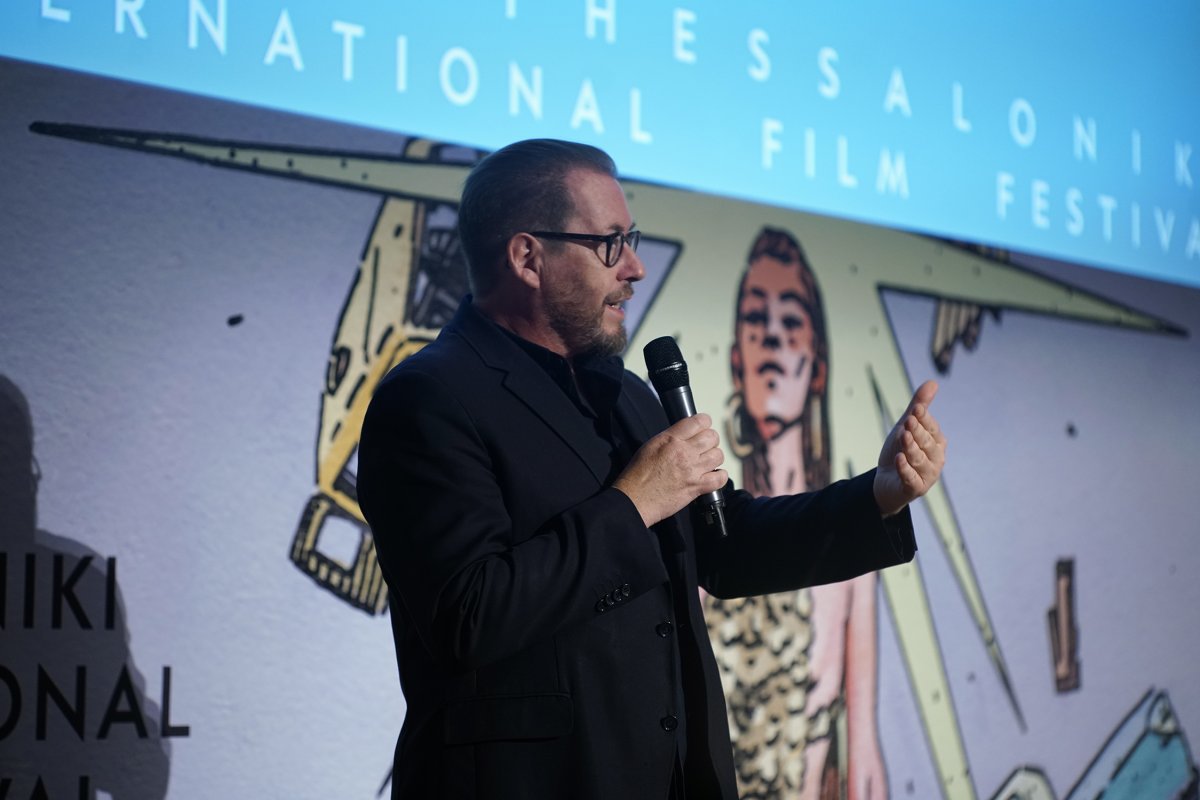 The masterclass “Laurent Grégoire-Call My Agent on Stage” was carried out on Thursday November 10th, at 10am in the Pavlos Zannas theatre. The iconic French agent Laurent Grégoire, co-founder of the talent agency Adéquat, and the inspiration behind the hit TV show Call My Agent, revealed to the audience the secrets and unseen aspects of his work. Initially, Dimitris Koutsiabasakos, film director and Professor at the Film School of the Aristotle University of Thessaloniki, thanked the audience and the Festival for this series of interesting masterclasses, and presented Laurent Grégoire: “The talent agent is a figure of great importance in film production, especially abroad. For many artists, their course and survival depend on the agent. We are very lucky to have with us Laurent Grégoire, co-founder of the talent agency Adéquat, who inspired the series Call My Agent”.

“I am happy to be here at the Festival, especially since I’ve heard so many positive comments”, Grégoire said at first. “I know the General Director, Elise Jalladeau, who is an integral part of the Festival, an important institution for many of us who work in cinema”, he mentioned. “This profession is taught in action; I began working in this field by chance and have been active for 35 years now. I believe that in this industry, anything can happen. You have to preserve the hope within you, and strive to help the younger people of cinema to achieve their goals”, he said.

He then referred to his agency in Paris, Adéquat: “We represent big names, such as Marion Cotillard and Omar Sy. I don’t believe there are agencies like that in Greece, and this is because the film industry is not as developed as it is in France. When only a few films are produced, it is hard for the need of agents to present itself. It is considered some kind of a parasite profession that explores the correlation between the interested parties and the job offers. It is the invisible hand that sets up these relationships, between the opportunities and the people who are there to seize them”.

The job of an agent, according to Laurent Grégoire, focuses on:

“Agents can be found in big countries where film production is rich and there is enough work, so that the field can hold its ground”, Mr. Grégoire continued. “When the country lacks in production (for instance, Cyprus, which makes 10 films per year), there is no need for this field to exist. In Belgium also, the job of the agent is not allowed. They believe we don’t work in favor of the actors. In the case of Greece (with 30 films per year), soon agents will be allowed to work. The country has reached a level of maturity in terms of film production”.

Afterwards, he delved into the issue of remuneration. “We, the agents, receive 10% of the actor’s compensation, not more, not less. No compensation comes directly to us: the producer is always involved. There is a document that links the artist to the agent: the mandat d’ artist, which of course offers the artist the chance to resign at any time. Of course, it also protects us with financial compensation. Each artist is obliged legally to have an agent, as well as international collaborations. After the first year, the contract is inexplicitly renewed for three years each time. This document defines of course the actor’s overall activity. There are legal and financial aspects to the field, for the protection of professional activity for both parties”.

Commenting on the relationships between agent and actor, Mr. Grégoire mentioned: “We are on the artist’s side, we develop a close relationship. When an artist leaves an agent, it’s kind of depressing. With Marion Cotillard, for instance, we have been together for 30 years. We’re like a couple without the sex part. We become very close and some people get exhausted by such an intimate relationship after some time. It’s a friendship with financial aspects to it. Personally, I cannot work with actors I don’t admire, no matter how talented or famous they may be. Also, I refuse to work with actors I have not watched them act and perform”.

He later discussed the ways of dealing with the rejection actors face, as a necessary skill: “It is hard for someone to see that they’re not preferred by directors. Sometimes it’s not about the talent, but it has to do with the physical appearance. It’s a complicated game. Often, you don’t get picked, but this doesn’t have to do with what you are and what you represent as an artist. Here is where the agent’s job comes in, so that the artists are guided through their choices”. Afterwards, he talked about the shift of interest towards the platforms: “We represent approximately 800 artists, not just film actors, but TV and streaming platforms actors as well, screenwriters, directors, and others. Now, streaming platforms are inarguably dominant on a global level”. He also referred to the show Call My Agent, for which he was the inspiration, from how it began on France 2 channel and made it all the way to Netflix thanks to its great success. This was a point of reference for talent agents globally, because it was the first series of this scale to refer to this lesser known profession”.

He then discussed how Audrey Tautou rejected the role of Edith Piaffe in the film La Vie en Rose, and how he mediated so that Marion Cotillard would take the part, in a performance that granted her the Academy Award for Best Actress, deeming the agent’s role as “strategic” in such cases. He also commented on the “death” of the national element in cinema. “Now, thanks to the globalization effect and digital technologies, things have changed. Someone can work in various European cities – given that they are fluent in English”, he added. In conclusion, he referred to the difficulty and instability attached the profession of acting: “In acting, anything can happen, and the only thing anyone can do is endure and believe in themselves. It is a truly difficult profession. The agent is, ultimately, a good ally during a difficult journey”.