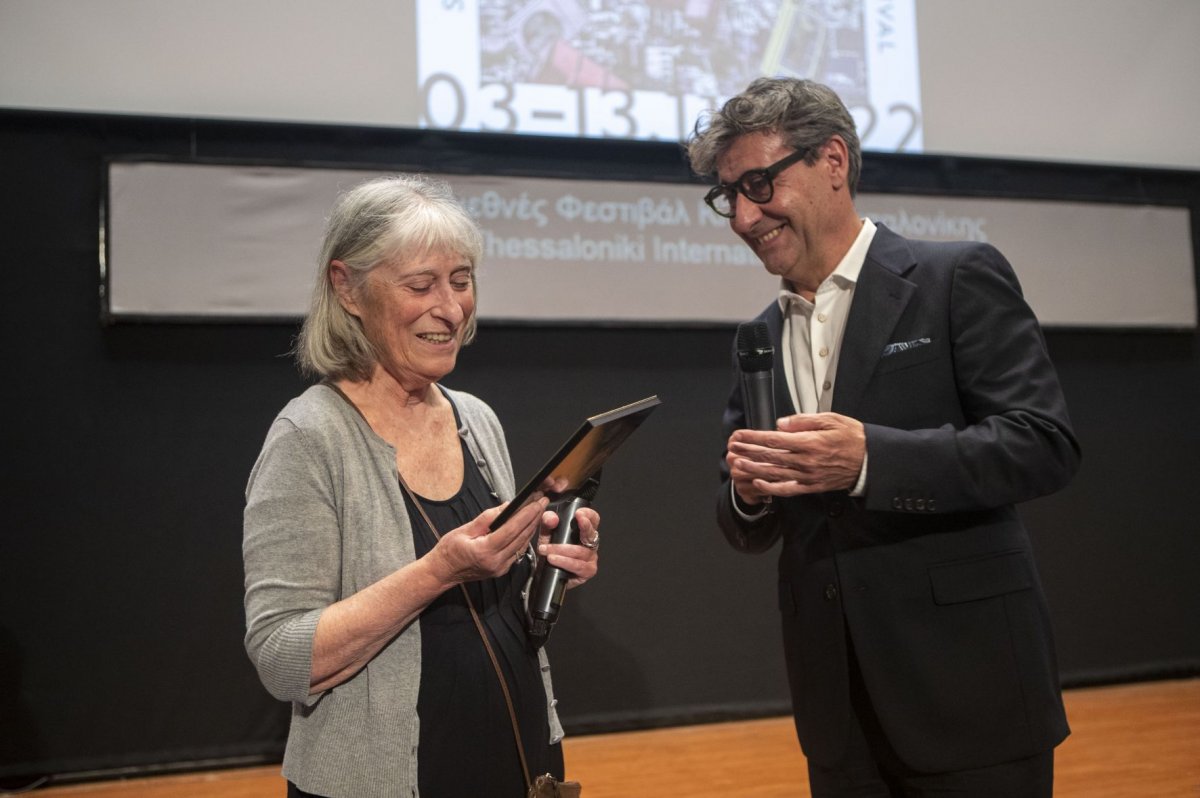 On Thursday, November 10, in Pavlos Zannas theater, Maria Gavala, one of the most multifaceted figures of Greek cinema, was awarded the honorary Golden Alexander, within the framework of the spotlight hosted by the Festival to the work of the gifted director. Orestis Andreadakis, Artistic Director of the Festival, granted her the award and praised her work: "I salute a Renaissance woman, a restless and sophisticated creator, who has left a valuable legacy as a director, film theorist and writer. She directed unique films, wrote reviews, translated theoretical film texts, as well as literary works. At the same time, she wrote ten works of prose, she contributed to many catalogues of the Festival. For all the above mentioned, Thessaloniki International Film Festival holds a tribute to the work of this woman with the films On Love (1982), The Scent of Violets (1985) and Magic Glass (1988). All Maria Gavala’s works They are handcrafted films with thin, colourful threads and soft fabrics".

He immediately invited Ms. Gavala on stage. In an emotional state, Ms. Gavala said that she was happy to accept this award, also on behalf of her associates. Specifically, she made special mention of Theodoros Soumas, who directed the second part of the film On Love, titled Jason (she directed the first one, titled Chrysanthi). She went on to thank a list of people: Filippos Koutsaftis, cinematographer, Marinos Athanasopoulos, sound director, Despo Maroulakou, editor, whose studio at Lycabettus, named "Gertrude" after the film of Carl Dreyer, was a meeting place for many of the key figures of the New Greek Cinema. She also thanked the actors and especially Yiota Festa, her "muse": "With Yiota, apart from On Love and The Scent of Violets, we have also made an experimental medium-length film, when Yiota was still a student at the National Theatre and I was on the process of shooting my third film. We've been working since then and we've also made a TV movie." She also mentioned the actors Maritina Passari, Nikos Kamtsis, Akis Sakellariou, Noni Ioannidou and Smaragda Diamantidou.

Finally, she thanked Thessaloniki International Film Festival and the Greek Film Centre for their initiative to technically restore the films and digitalize them, "because these films were literally buried. They were left in some lofts, in an environment completely unsuitable for a film, where they were almost damaged. These films would at some point be lost, if it weren't for this method of restoration and digitalization. I recall that the Greek film archive gave us a place in Agia Paraskevi, where the environment was more appropriate, but still not the best". She admitted that she remained speechless when she saw the result of the films restored. This work is particularly important: "I believe that these films are a continuation, they are the history of Greek cinema. In other words, we must not be contained to the legendary Greek directors of the 70s or the most recent hits. There are also the intermediates films that serve as bridges, and we have to keep them alive in our minds and hearts."

These films are a product of the 80s, a period with many difficulties for filmmakers. Ms. Gavala's films were made with money earned of various jobs she did, as a literature teacher, while also gathering herself the props for the film. “A thing I would in no way recommend today", she laughed. "Anyway, these were nice times, because we worked and we had a lot of fun. It was weird, though we made films at the time, in the midst of all these difficulties and with very low budgets.” She concluded by also mentioning, this time, Pavlos Zannas, the person who has given his name in the hall where the screening was taking place. He was the man who funded the completion of On Love". "He saw the material; the film was made and after two or three years he also funded the Scent of Violents. I feel grateful towards him". The screening of the film took place while the audience was still warmly applauding the director.