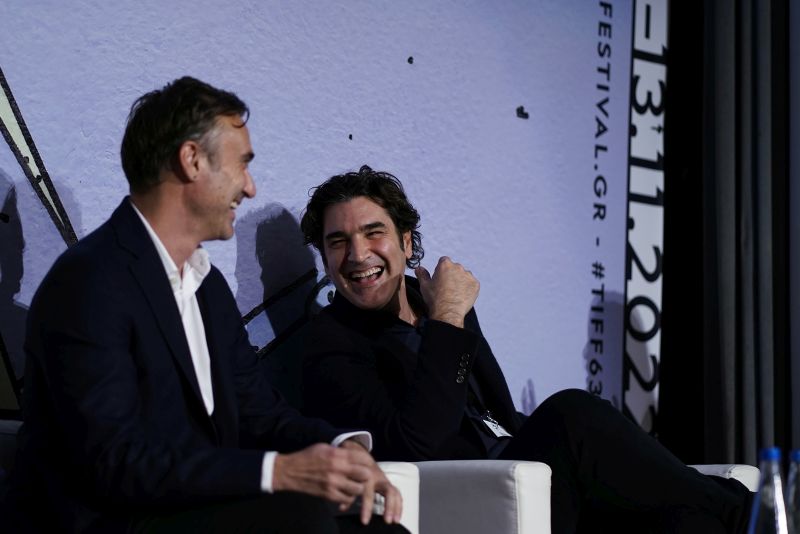 The 63rd Thessaloniki Film Festival introduces for the first time the AGORA Series, a newly established section that aims at the creation of a communication network among the professionals who create series for TV networks and platforms. A talk titled Modern Greek Drama – Setting up the local scene, was carried out on Thursday, November 10th, in the presence of many renowned professionals of the industry, while the conversation was moderated by journalist and film critic (NOVA, FLIX.GR), Poly Likourgou.

The first panel begun with Giannis Donos, Original Content Manager & Head of Acquisitions, ANT1 +, Konstantinos Mpourounis, Deputy General Director of Programming, ERT, Konstantinos Sousoulas, Chief Content Officer, MEGA TV, and Faye Tsitsipi, Senior Manager COSMOTE TV Originals. Poly Likourgou took the floor. “Agora Series aspires to become a network of communication, and why not, of collaboration, among the professionals of the small screen. Technologies change, and so does the viewing experience of films and TV, which have brought TV and its platforms on the forefront, which poses a challenge to the professionals of the industry”.

When an idea comes to the table, how do you make a choice? That was the first question. The talk was initiated by Faye Tsitsipi. “COSMOTE TV is active in the production and co-production of original content and deals mainly with fiction films and documentaries, with 160 productions in the field of the misunderstood documentary genre. We have proposals by creators at all of our desks. The way we work and what we always look for, apart from the script, is who we want to address, so that we can then invest. There is the creative part but also the more strategic one, so that the content appeals to the viewers.

According to Konstantinos Sousoulas: “Of course, numbers mean a lot to us. When you have created a mosaic of mainstream audience, adding something different has always been in my interest. But it can’t be more than one thing per season. Every project needs its time and a good script is what we all look for. Milky Way, which we are developing now, is a piece of provocative television”.  The situation is different on a platform. As Giannis Donos explained: “We are not caught up in a time chase. We give the project the time and the space it needs to be developed in the right way. We also have a programming since we invest on the product. Serres, by Yorgos Kapoutzidis, was a huge bet with a particular theme and we were so happy that the audience embraced it”.

“Which choices get the green light from you?”, was the question by Poly Likourgou. According to Konstantinos Bourounis: “Public TV addresses everybody and needs to cover all of the audience demands with a program of high quality. Last year for instance, we shot three series based on short stories. Society nowadays has become more demanding but also more acceptive of new proposals, such as I tourta tis mamas”.

“For us, it was essential to share the platform with filmmakers, without underestimating TV directors, who are extremely talented. We follow the trends of our country and we want to collaborate with people abroad in co-production”, Giannis Donos stressed. “We also entered the fiction realm and are open to collaborations. We had a co-production with Apple+ for the series Tehran, that was shot in Greece. It’s all a matter of collaboration and agreement, because the series is not screening on our platform. It is a collaboration that benefits extroversion and it has to do with strategy”, Faye Tsitsipi mentioned. “We also have collaborated with film production companies, for instance for Papakaliatis’ Maestro. The criterion is a well-written story”, Konstantinos Sousoulas.

As for the secret recipe to success, if any: “Of course there isn’t one. First, the programming team is of great importance but many things are determined by instinct. What do you really want to do. What helps a lot is trusting the production companies. And for every show, you have to also trust the showrunner. In a series, it may be the screenwriter and in another the director”, Konstantinos Mpourounis explained. “We want the Greek material of our platform to travel abroad and to offer substantial content”, Yiannis Donos mentioned, after the question of what will platforms look like five years from now. According to Konstantinos Mpourounis: “We will not continue to have this many series. There is not a lot of time. We want stories we have not seen before that would also make it abroad”.

A second panel followed with Fenia Kossovitsa, Producer, BLONDE, Ioanna Davi, Producer, Indigo View, Dionisis Samiotis, Producer, Tanweer Productins, Markos Cholevas, Head of Board, Greek Film Center, Stelios Kotionis, Foss Productions. “What you want to express through your work can be screened in a big or a small screen. From the very beginning as the head of the board of directors, I was involved in TV shows and this new dimension of TV. With the recovery fund, we are developing a program that will fund the development of series that can be exported abroad”, Markos Cholevas responded, to the question of how a new project can be funded.

“I love series as much as cinema. For me, they’re the same thing. It was the timing that was wrong. Who would listen in 2003 about a show like this. In 2018, after the film The Other Me, instead of making a sequel, we decided to make a series”, Fenia Kossovitsa mentioned in regards to the transition to television. Ioanna Davi spoke about The Island and the cinematic logic behind it. “The unique thing about it was that we left the studio and went to Crete. The cinematic aesthetics have to do with creators and development. We need institutions that offer funding, such as the Greek Film Center”.

According to Dionisis Samiotis: “Our production company was launched four years ago and we have been active in many countries, not exclusively in Greece. Our priority is cinema and not television. TV series can add to the business plan of a company but the main thing will always be cinema. Television entered our lives because of the pandemic. We spent many hours with screenwriters then and many good projects were created. Now, time is limited.”

Then, the question of what would make things easier for a producer from now on, was posed. “My background is advertising and we decided to get funding from there and to make films. We want to tell new stories to the world. We get caught up with stories that affect us first so that they then reach the audience. What we want is that we are the producers and the networks are the co-producers, such as Karagatsis’ Chimera, a co-production with ERT, which will cover an amount of expenses, and the show will then travel abroad. We follow the model of film in TV also. As for Maestro, Christoforos came along with MEGA TV so we could not be the producers. But we were part of the discussion about the sell for which the price was anything but insignificant”, Stelios Kotionis.

“We lack the time, the money and the expertise needed for the projects to make one step further”, Fenia Kossovitsa stressed. “For me, television is different to cinema. We are pitching every year so that we find new people and projects, as will happen for the second year this May. Dionisis Samiotis mentioned. “We want different stories that are born in Athens”, Ioanna Davi mentioned.

The panel of creators followed with: Yorgos Kapoutzidis, Director, Screenwriter, Actor and Agora Ambassador, Vardis Marinakis, Director, Katerina Mpei, Writer/Screenwriter, Christoforos Papakaliatis, Director/Screenwriter/Actor, Katerina Filiotou, Director/Screenwriter, and Lefteris Charistos, Director/Head of the Hellenic Film Academy Board. “I was fed up with Greek films and wanted to enter the world of television. Even though I was moved by the script and wanted to develop it”, Vardis Marinakis said of his choice to develop Silent Road. “For the past years, I am happy after Eftichia, to be working on my own pace. When you’re a screenwriter and you want to make a film, you either beg the directors or do what the director says. You can’t say you’re a screenwriter for film in Greece”, Katerina Mpei said.

“Due to the pandemic, I couldn’t shoot the next film so I wrote the story of Maestro in the island Paxoi. I wanted to write a story about nine places, which was hard because essentially I had to right a 9-hour film”, Christoforos Papakaliatis said of his decision to write a series. After Wild Bees, Lefteris Charitos is now developing the series Witch. “I would like to apologize for saying that the show will be a mini-version of Game of Thrones. It will be an expensive show in a genre we have not yet seen in Greece. The director approaches it creatively, which is a big risk, because making Greek TV is a painful and exhausting process. I was troubled by the magnitude of the production and the credibility of the product that we will present”.

What becomes a TV success? As Papakaliatis explained: “No-one begins with that in mind. For me, whatever I write, but even from the editing and the shoot, I love it so much and cannot be objective. After 32 years in this industry, when I write, I also direct and produce. For all of us, writing is a personal need. We don’t think of who will watch it”. “When we were only starting, we had seen stuff that had affected us and we now know what it is we have to sat, because we have so many more experiences”, Yorgos Kapoutzidis added.

Katerina Foliotou commented: “When you write you are absorbed in your story and it becomes impossible to think of the Greek audience, let alone for a foreign one”. “Whether I write something of mine or not, I love it as if it was mine and I think of how I can make it better”, Katerina Mpei mentioned. “All the series we’ve loved have something personal. Whether of the director, or the screenwriter. For a show to be loved, someone has to grab it because we pour our hearts into it. And I don’t believe there is cinematic TV. The image is the medium but TV appeals to a different audience. Films come to life to be watched on the big screen, but TV follows another logic”, Lafteris Charitos pointed out.