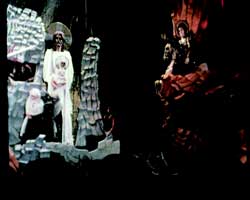 Kostas Sfikas was born in Athens in 1927. He worked as an employee in the post office in his juvenile years. In 1961, he directs a short film and begins his adventure as a self-taught cinematographer. Seven years later, along with Stavros Tornes, he directs the short documentary, Theran Matins, bought later by MOMA in New York. Devoted to experimental cinema, Kostas Sfikas has filmed nine documentaries and fiction films and continues to create, being a constant alternative voice in Greek cinema. A complete retrospective of his work will be accompanied by a publication of a monograph.

Born in Athens in 1927.He was a postal employee from his adolescence. .Costas Sfikas embarked on the adventure of the self-taught filmmaker in
1961 with his short film Inauguration It was followed by the documentary Wait in
1962 and Dawn in Thera in
1968 which he made in collaboration with the late Stavros Tornes and where the influence of the neorealistic school is prevalent. His aversion for representational film and the vision of a dialectical materialistic cinema, capable of giving form to the conquests of Marxist philosophical thought, led him to make the films Model 1974, (Award for best artistic film at the Thessaloniki Film Festival in
1974). A copy of the film can by found at the Georges Pompidou Museum of Modern Art in Paris). This was followed by Cathedrals
1975, Allegory
1986, Paul Klee's prophetic bird of sorrows
1995, Prometheus enantiodromon (Prometheus Retrogressing)
1998 and "THE WOMAN OF...AND THE COLLECTOR, ALLEGORY III","VARIATIONS ON THE THEME OF CONTE DIONISIU SOLOMOU". Since
1976 the television program "Backstage" with its open investigative character offers the possibility of making a significiant number of essays: -The Violinist Tatsis Apostolides -Lament for Yanni Christou
1978 (20') -The Circus of Sofia
1979 (20') -The Gospel according to Saint Mark
1979 (20') -Voices and haunts of the rebetico music
1980 (20') -Expressionism in the cinema
1980 (20') -The montage of Eisenstein
1982 (20') -The poetry of A ndrea Ebiricu
1982 (25') -The misanthrope by Moliere
1982 (20') -The apocalypse of sovereign
1992 (25') -The enigmatic Mr Jules
1992 (50')Verne-Nemo Allegory II

The film recalls various periods of Greece's history. Sfikas studies and interprets the artistic movements of his time, influenced by eighties Post-Modernism. Starting in antiquity, he passes through the Byzantine and feudal eras and ends up in capitalism, without proposing this as a final end. Following the spire of this development, Sfikas resorts to poetic allegory. His cinematic oratorio, where angels are crushed in the abyss of civilizations, is something more than the transformation of a philosophical idea into a film; it becomes the very soul of the poet who wonders about its perpetual evolution.
Screening Schedule