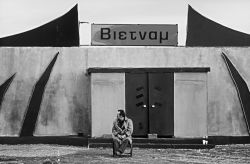 A film made up of three different stories, each one involving a person who is approaching a critical moment in his life. A Silver Coin on the Lips: While at a dig in Macedonia, an architect, whose son shot himself one year earlier while doing his military service, discovers an unlooted tomb that contains the remains of an officer of the Hellenistic period. The Last of the Lesser Whites: a group of ornithologists go to the Evros River Delta to find, with the help of an elderly game warden, the last lesser white-fronted goose which has sought refuge there. When the goose is shot by a poacher, the game warden will pay him back in his own coin. Vietnam: a middle-aged factory-owner, distraught over the fact that his wife has taken the children and left him, ends up at a seamy bouzouki joint in the middle of nowhere, which he proceeds to literally demolish.

With the support of GFC

He was born in Athens in 1940. He studied Film Direction at the Hellenic Cinema and Television School Stavrakos in Athens and after his graduation he worked as an assistant director on many films. His films have received numerous international awards. His latest film, Little England, is the official entry of Greece for the Best Foreign Language Film Academy Award.