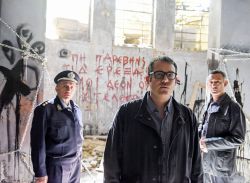 His feature film Common Denominator screened at several festivals and received several awards. It was released by Feelgood in Greece in December 2014. Common Denominator is being adapted for the theater by Didier Long and will premiere at the Theatre de l’Atelier in Paris in autumn 2017. The Other Me is his second feature film.

(selected)
2013 Common Denominator
2016 The Other Me
Athens 2015. Five murders. Dimitris Lainis, a criminology professor with Asperger’s syndrome, undertakes to assist police in solving the hidden mystery behind these five murders. His only allies are the puzzle of the Pythagorean theorems and Marcel De Chaf, a professor of mathematics, who as another “deus ex machina” will lead Lainis towards the solution to the mystery. The closer he gets to solving the murders, the more he enters dangerous paths. Will he be able to solve the mystery and discover the guilty ones?
Screening Schedule