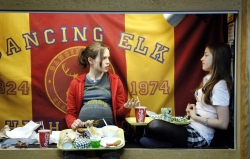 Juno is a unique 16-year-old girl, who finds herself unexpectedly pregnant by her classmate Bleeker. She chooses to keep the baby, and with the help of her best friend Leah, she finds the “perfect” adoptive parents, Mark and Vanessa. Luckily, Juno has the total support of her parents, as she is facing some tough decisions. She flirts with adulthood and ultimately comes into her own as a witty and independent teenager.

He was born in Montreal and grew up in Los Angeles, where he studied Creative Writing at the University of Southern California. His short film In God We Trust screened as part of the Toronto Festival’s Discovery Programme in 2000 and his feature filmmaking debut, Thank You for Smoking, which won many awards, was a Special Presentation at the Toronto FF 2005. Juno is his second feature film.