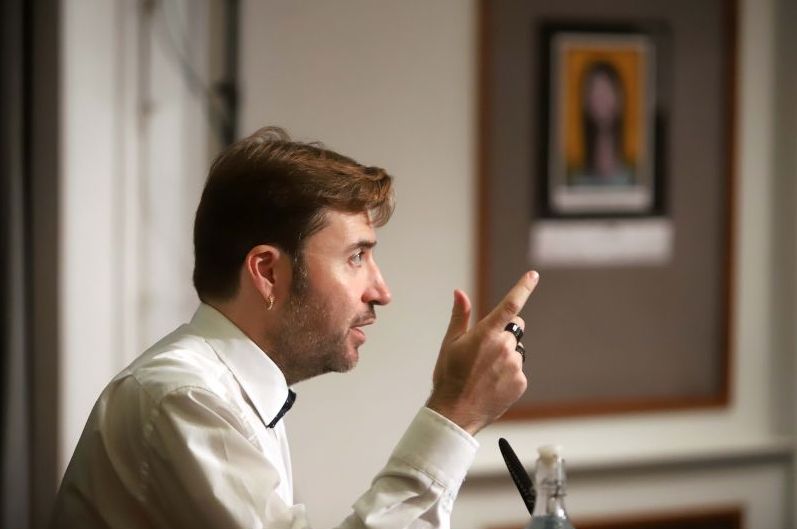 The Catalan filmmaker and artist Albert Serra, invited by the 60th Thessaloniki International Film Festival, gave a masterclass on Monday, November 4, 2019, in the theater “Pavlos Zannas”, where he looked back on the high points of his career and shared with the audience his views on art, history and life.

Initially, the coordinator of the conversation and Head of the Festival’s International Program, Yorgos Krassakopoulos, welcomed the director to the Festival, and pointed out to the audience that this is an artist with a solid and compact vision concerning the art of cinema, a vision already glimpsed in his first film Crespià, the film not the village (2003). “A true poet of images”, he added, and gave the floor to the Catalan filmmaker right away.

Albert Serra emphasized that during the masterclass he will try to explain concisely his methodology which is inseparable from the digital revolution that breathed new life into the methods and style of filmmaking. “My approach to direction, my approach to making films is tied to my personality. My task is not to serve cinematic ideas, but non-cinematic ones; that is, how one can cast life itself through cinema. When you decide to make a movie, you decide to live in a new world. Everything is different and the rules change; everything becomes more intense, more contracted, more lustrous. You live life and facts faster”, as he characteristically put it.

Recalling his past, Mr. Serra mentioned that he did not study cinema but literature, while he explained he was mostly influenced by the American music scene of the 60’s and 70’s, but also by the avant-garde artistic movements of the early 20th century. He also mentioned that he was born and grew up in a small village next to the city where Salvador Dali grew up and excelled, an artist who “lived every moment of his life in a completely different manner than the rest do; an artist who persistently broke the rules; I never saw anybody else quite like him”, he noted.

Going back to his filmmaking methods, and after having emphasized that in his life he never had any real contact with a great artist, he posed the joy of playing with film at the center of his technique. His main aim, his obsession, is playing, along with other techniques; for example, not preparing before shooting. “Why not wait for the technicians to prop up the lights? Because it is boring. Why not make “bourgeois” films in a bourgeois network of labor? Because it is boring. Pseudo-professionalism is what ultimately kills the playful dimension of filmmaking. Today, almost all films are controlled by professionalism. But, in the end, this makes the whole process rather boring and academic. Yet with the arrival of digital technology a lot has changed; we are now given the opportunity to film more easily and in a different way: I personally shoot scenes with three cameras running at the same time, without informing my actors where to look or focus. I don’t ask them to “fit in” the body and the essence of the character they are playing. I don’t want them to know anything, just act in front of a lens. My purpose is not to have professionalism kill freedom, because in that way inspiration gets killed, too”, he added.

Expanding on his filmmaking tactic, Mr. Serra said that this method obviously takes time. He professed being obsessive concerning this, but, in his opinion, inspiration is born only in this way. The camera lens captures a lot, and it often registers things in a different way than the human eye does. “Often, when something feels impalpable, the camera can capture it. My goal is to make of the human eye and the camera’s ‘eye’ a perfect match. That is why I always use zooming lenses. I rarely need an assistant to focus the image; so, imagine the autonomy three digital cameras, working simultaneously, can offer, all equipped with lenses of that type. The energy radiated form this particular kind of shooting is outstanding”, he noted. The director, having emphasized that quite often bad reviews can be a source of inspiration for him, went on to say that directors of photography encounter a lot of difficulties, and that prevents them from fully embracing his method. “I try to instill in cameramen how to avoid perfunctory moving around. The camera should just be there, recording, and allow for inspiration come, as some kind of epiphany – for example, it should record a man thinking, without truly knowing what happens inside his mind; and that is why I have the highest respect for cameramen. I, personally, have only rarely used a camera, but I always choose the cameras that will shoot the scenes of my films. I also do not want to intervene at all concerning what precisely will lie in front of the camera, or communicate with the actors and crew. I don’t want to be involved in things and, ultimately, I never have a full picture of what exactly is happening. I don’t like the composition of plans. My mission is just to make things happen; to bring the three shootings coming from the three cameras in harmony; and then choose the best from what the camera has recorded, through the editing procedure”, he explained.

Referring to the process of artistic creation, Albert Serra underlined that the most magical moment is that of inspiration, which essentially brings together life and art, creating something and transforming something else – this supplementary value created when art crosses with life. “This is something magical; this creates the sense of being in another world – and this is where the purity of cinema lies, its innocence, if you want. That is why I try not to communicate with actors, not to rehearse, then use a completely different methodology in editing; let everything float”, as he characteristically said.

The Catalan filmmaker then added that it is only during two junctures of the production that he trusts nobody but his instinct: at casting, and at the really early stages of the editing procedure, when he examines his shots with a critical look. “Editing begins on paper and not on computer, and there I witness random scenes, without any narrative or temporal continuity. I just choose what I like, even if it doesn’t cohere. By using this method, I know that I cannot make the perfect narrative film, but that doesn’t interest me. Many cutters can’t take it and leave at some point during the editing procedure”, he added with a smile.

In the last part of this quite stimulating masterclass, Albert Serra referred to his last film, titled Freedom (2019), and its nude scenes, saying that the moment nudity exists, everything changes. Many professional actors decline shooting nude scenes, although this is part of their work. “Why is that? Nudity is part of life itself. So, why they say no? Because they feel exposed. Nudity brings immediacy. All vanity evaporates and the actor is exposed, exposed to desire; a desire that may have a good turn, but it may also have a bad, dark turn. This ultimately brings out a huge tension. Desire is there and control is lost. The actor cannot fully control what his body emanates; directness brings out a great intensity. So, in what way one can overcome this? With pressure. With authoritarianism. This is where I push my actors even more; making them accept the unacceptable, the insulting. When eventually you reach a limit, things happen – not always, but usually something happens. That is why a director’s purpose is not to use, but to abuse actors. And that is because there is a crystal-clear artistic goal behind the whole procedure. The only way to make them understand this is to abuse them; make them go to extremes”, he concluded.