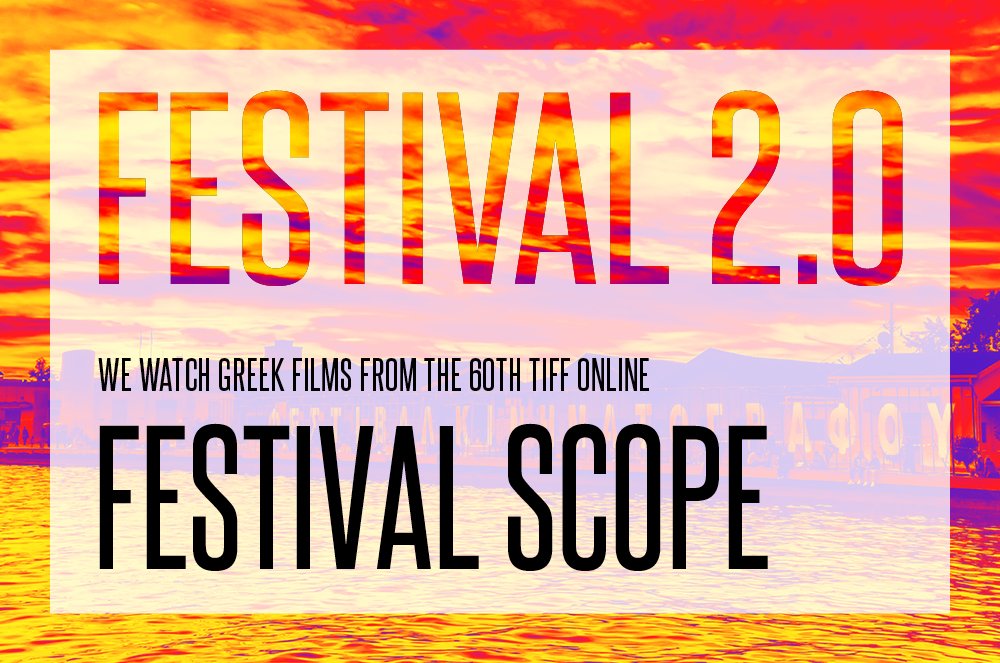 The Thessaloniki International Film Festival continues its online activities during the days of the quarantine. TIFF offers for free, through the streaming platform Festival Scope, digital screenings of Greek films from the program of the 60th TIFF.

Festival Scope will host the titles from April 14 until April 26. Each film will be available for 300 screenings with a simple and free registration.

Supported by the Ministry of Culture, the Festival will cover the cost, and has, also, offered a screening fee to the producers.

The Greek and international audience will have the chance to watch the films:

@9: At nine by Angelos Spartalis: An urban legend has it that a nine-year-old ghost girl occupies foreclosed apartments in downtown Athens and violently attacks real estate agents and prospective buyers. A young couple in love, eager to start their life together, will try to take advantage of the little ghost for their own benefit.

Born on the 8th of March by Lyberis Dionysopoulos: Women have taken over the world and have executed all men. A misogynistic male manages to survive. One day, he will stumble across a rebellious girl named Ophelia who decides to help him and they will soon bond over their mutual love for cinema.

Cosmic Candy by Rinio Dragasaki: Anna, an eccentric supermarket cashier, lives in Athens, alone in her parent’s big apartment. One day she will be forced to take in the ten-year-old girl next door, after her father goes missing. At the same time, she will be confronted with her possible dismissal and the overwhelming scenario of a workplace romance. And all this, under the influence of excessive Cosmic Candy consumption. The film participated at the Crossroads co-production Forum 2013 and the Agora Works in Progress 2016.

Defunct by Zacharias Mavroeidis: 30-something failed businessman Aris finds shelter into his grandpa Aristides’ house, a WW2 veteran, deceased long ago. Soon, he reunites with an old friend of Aristides. In his effort to live up to Aristides’ legacy, Aris progressively identifies with his grandfather. The film participated in the Crossroads co-production Forum 2013 and in the Thessaloniki Goes to Cannes Works in Progress 2019.

Exile by Vassilis Mazomenos: Aris, a desperate man, attempts to leave Greece with an almost wrecked boat. After being rescued from certain drowning by some Coast Guard men, he now returns as a foreigner to his own ruined country. There he experiences every kind of “sin” and extreme as an outcast of the system. He steals; he becomes a slave and kills. He tries, willingly, to survive off the beaten track. Is this the story of a modern Ulysses or the nightmare of an ordinary man?

The Lair by Vassilis Noulas: Athens. The last day of a female member of a terrorist organization. Despina shoots, kills, wanders around the city, tries to find help, fails in every attempt, gets shot, dies in her apartment. The movie attempts a personal portrait of the city of Athens through the drifting of the main character. The Lair – a low budget production with DIY aesthetics and queer elements – is an existential road movie.

Persephone by Costas Athousakis: A Greek-Japanese cine-operetta, where the ancient Greek myth of the abduction of Persephone comes alive before the eyes of a Japanese group, as the arrival of a stranger forces the family members of the hostel “Persephone” to identify themselves with the fate of the mythological heroes. The film participated in the Thessaloniki Goes to Cannes Works in Progress 2019.

The Rocket by Stefanos Sitaras: Known to be a liar, Stathis is forced to gather all his friends and take them to a “top-secret location,” to prove the existence of a supposed rocket. Shot entirely with non-actors over four years, the Rocket tells the true story of 2015’s last summer night.

We No Longer Hear the Songs by Takis Papanastasiou: Nick and Nora invite Angelos, an escort, for the night. The main “menu” includes burnt flesh from a clothing iron, musicals, and westerns, children’s games and dark nightmares, Elvis and Dietrich. Once upon a time, Nick and Nora fell in love at first sight; like all couples that fall in love at first sight, now they’re almost happy.

Winona by Alexandros Voulgaris (The Boy): It appears as if it is an ordinary outing to a beautiful beach: four women - none of which is “Winona” - enjoy the warmth of the sun and the coolness of the sea. What secret hides behind their games?

Zizotek by Vardis Marinakis: After nine-year-old Jason is abandoned by his mother at a folk festival, he takes refuge in a cabin in the middle of the forest belonging to a mute loner named Minas. Although at first the man won’t take him in, a series of circumstances eventually leads them to form a family – something both of them have lacked for a long time.

Meltem by Basile Doganis: One year after her mother’s death, Elena, a young French woman of Greek origin returns to the island of Lesbos with her friends Nassim and Sekou. But the holiday takes a new course when Elena and her friends encounter Elyas, a young Syrian migrant of their age.