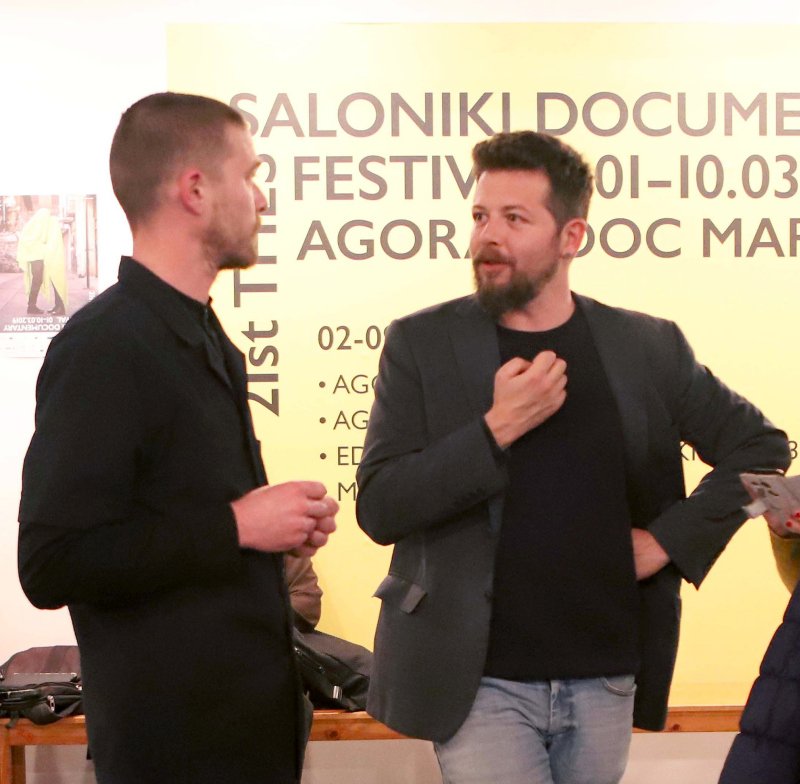 An exciting and outside-the-box project was presented, for the first time, in the 21st Thessaloniki Documentary Festival, on Tuesday, March 5th, at Warehouse C, within the framework of the Market Talks event held by the Festival’s Agora Doc Market. Greek filmmaker-scriptwriter Syllas Tzoumerkas (A Blast, The Miracle of the Sargasso Sea) and Greek actor-director Christos Passalis (Dogtooth, blitz theatre group) presented the project titled “City and the City”, commissioned by the Thessaloniki Film Festival and the Metropolitan Organization of Museums of Visual Arts of Thessaloniki (MOMus).

“City and the City” is a multi-platform artistic venture, with a total duration of 70 minutes that balances between film and installation, consisting of 7 episodes that left their mark on the history of the Jewish Community of Thessaloniki (1910-1965). These seven episodes are reenacted in the modern urban landscape of Thessaloniki.

The presentation was preceded by TFF’s Artistic Director Orestis Andreadakis, who addressed a warm welcome to everyone and went on to mention that the Thessaloniki Film Festival serves for the first time as a commissioner in such a unique and groundbreaking artistic venture. He also pointed out that on account of this project, TFF joined forces with the Metropolitan Organization of Museums of Visual Arts of Thessaloniki (MOMus), an institution of high prestige and international outreach. “This one-of-a-kind project cannot be classified under the restrictive umbrella of neither documentaries nor fiction films. “City and the City” cannot even be categorized as a film, as it aspires to carve new ways in storytelling and obtain the status of a collective visual experience urging us to approach and reexamine History with a fresh pair of eyes. A hideous crime was committed 76 years ago, literally a few blocks from where we are standing at this very moment, the extermination of the Jewish Community of Thessaloniki. “City and the City” sets out to reenact these dramatic moments through seven filmic snapshots”, added Mr Andreadakis. At that point, the TFF Artistic Director, before giving the floor to the artists behind the project and the producer of Homemade Films Maria Drandaki, did not omit to cordially thank the president of the Jewish Community of Thessaloniki David Saltiel, who granted this event with his presence.

Following on from Mr Andreadakis, Syllas Tzoumerkas made clear that everyone coming from the documentary field should adopt an “adventurous” view on this project in order to fully grasp its nature and the purposes it aims to fulfill. “In no way does this project meet the stricto sensu definition of a documentary, as it aspires to embark on a genre-crossing journey. It can be classified as an installation, but at the same time it will take the form of a segmented film, comprised of seven short films – episodes that came about after intensive research, with a total duration of 70 minutes. The initial spark of inspiration sprang up from the fact that both of us come from Thessaloniki and sensed the urge to return to our birthplace and dig up disturbing issues that have been buried for decades now. Our goal is to reenact the two aspects of this city, its multicultural heritage, as well as the times of persecution and fear. These two aspects will co-exist and will be substantiated in the modern city landscape of Thessaloniki”, said Mr Tzoumerkas. He also explained that “City and the City” is an ongoing project that will come into full existence in the course of time, while expressing the hope and desire to meet again with everyone present in the event at the end of this long journey.

Christos Passalis took the floor next to describe the project in more detail. He initially pointed out that “City and the City”, as it is obvious right from its title, speaks of two cities: Thessaloniki of today and Thessaloniki of the 20th century, a city that went through world-shaking events. “We wish to bring to light an unseen conflict between a city that can brag about stories of solidarity and selflessness and the city where hatred and acts of shameful treason took over. We firmly believe in the acknowledgement of bitter truths and the necessity of historical memory, as oblivion is a shortcut to danger”, he stated and went on to briefly present the seven episodes that comprise the project “City and the City”.

“At least in a subconscious level, we crafted a reversed version of Dante’s Divine Comedy, with Paradise as our starting point; that is the period when the Jewish Community of Thessaloniki flourished, a time of smells, colors, joy and prosperity. Our middle stop is the Inferno of concentration camps, while Purgatory is set in today’s scenery, where all awkward questions, that have been meticulously and painfully silenced for so long, are finally asked. This is, if I am able to sum it up, the key point of “City and the City””, added Mr Passalis.

At the end of the event, the floor was given to producer Maria Drandaki, who stated that she feels happy and moved by the fact that Homemade Films is a part of such an ambitious and adventurous project. “It is of the utmost importance that a project such as “City and the City”, that constitutes a modern approach on History, is taking place in our times. We are currently in search of partners and collaborators and given the multidimensional nature of this project, eligible candidates for any kind of collaboration and partnership may originate from various areas of the country’s cultural and social circles”, concluded Mrs. Drandaki.