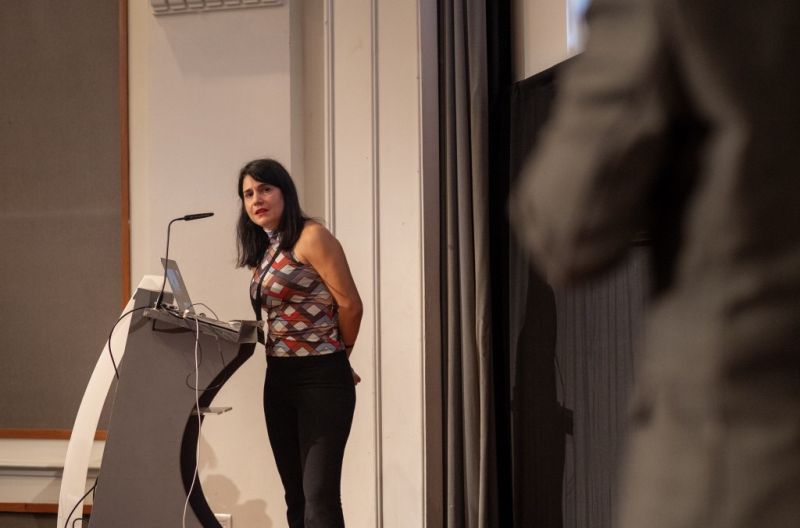 On November 7th, within the framework of the spotlight on Loukia Alavanou hosted by TIFF’s >>Film Forward section, the teaser of the visual artist’s new project, who will represent Greece at the 59th Venice Biennale in 2022, was unveiled for the first time to the public, at Pavlos Zannas theatre.

Orestis Andreadakis, who prefaced the event and invited Mrs. Alavanou to the podium in order to present her new project said: "This year, we decided to support a different artistic action, the official Greek participation in the 59th Venice Biennale, the most important art exhibition in the world. As you already know, Greece always has its own pavilion. This year, the installation is 100% cinematic, thus we decided to support our national participation. The artist representing us this year is Loukia Alavanou”.

Loukia Alavanou, made a brief introduction and explained:"First of all, thank you so much for the invitation and the collaboration. I have to say that I saw the first VR film in my life in Thessaloniki. We will be able to watch a VR film in an installation, in the exhibition-installation, at the Biennale, by creating – let me be a bit sarcastic here – the cinema of the future. I drew inspiration from "Cities in the clouds" by architect Takis Zenetos, whose work has touched me very deeply. In the 60s, Zenetos envisioned a city built in the clouds; at that time Athens was being architecturally destroyed. He envisioned a chair in every settlement of that city in the clouds, a chair on which we do everything, without doing anything at all".

Ms. Alavanou continued: "The time I was very much attracted to VR technology, I fell in love with this chair; I felt like it was looking too far ahead, it was talking about a world of AR, VR, XR. As I was working on a VR movie, I placed it there. We will have some hybrid elements, influenced by this chair, inside the Biennale pavilion. We will enter and listen to an audio project, while the image will be inside the VR headsets. We will be sitting in 15 chairs, keeping safe distances; we will be alone but together at the same time, a cinema of the future, in an individualized and at the same time collective view. We will wear a VR headset and watch the same screen, all together and each one alone at the same time".

The artist also commented: "This film is 360 and 3D, shot in the Nea Zoi (New Life) ghetto, in Aspropyrgos, an area where no-one but Roma people have access. I'm one of the very few who have been there, so it's a virgin cinematic landscape. I was reading Oedipus at Colonus, a truly up-to-date work and I asked myself why it is not so well known. I therefore believe that it is not so well known because it has to do with the old age taboo. I then realized that Oedipus went as a nomad, as an old man, from Thebes to Colonus. So I found an old gypsy king in Thebes, who told me his story and I realized that he was the story of Oedipus. Gypsies also have great interpretive abilities, so I decided to shoot the film in that place, with amateur Roma actors. There is a narration in English, it is very surreal, it is not theatrical or drama in the form we are used to. This narration lasts 20 minutes, a rather long narration for a VR movie, for 20 minutes of duration with a VR headset of the existing technology are quite long for the viewer. Probably, we will be able to watch longer movies within the next two years".

She also added "I was elaborating the project for a year, as I could not be accepted in the filmmaking community, during the first year. There is also a very interesting reflection of the story, as Oedipus enters the settlement as a stranger, so there was a perfect match. It wasn't high art; it was low art like the troupes playing in the communities. On this occasion, I wanted to talk about the VR camera, which never points the finger. On the contrary, everything comes out in the light with the VR camera. You also can't set up frames with the VR camera; it breaks all basic rules of cinematic storytelling. You enter into the subject and thus an interesting allegory is created with the blind Oedipus. After all, we are all blind when we watch VR".

Mrs Alavanou explained: "Since we are in Thessaloniki, let me say that Leonidas Papazoglou and all these itinerant photographers were a huge influence to me. These were the kind of photographers I had in mind for my shootings. For photography in VR art has nothing to do with a frame setup, on the contrary it deals with people around, in a theatrical way. The only important intervention I made in the film had to do with Antigone. I was a bit upset as Antigone doesn't talk much, so I added a monologue to her character. All sounds recorded in this specific scene were real and they came from the other side of the settlement where real gunfire was heard. We have a huge audio archive, with songs and words in a language that has not been recorded. I feel like I have something valuable in my hands. It is important to mention that in this project the sound was one of the most difficult and interesting parts, it was directional, a technology that has hardly been applied to VR films in Europe. The sound design is 360, you turn around and the sound turns with you. There is a huge audio file that me and my partner, Manolis Manousakis, recorded. This was a truly mission impossible from a technical point of view".

Then, the teaser of the new half-minute project was presented for the first time, and captivated the audience with the unique combination of sound, image, English storytelling and aesthetics. The funding of the project is provided by Onassis Culture and PCAI, whereas the production was undertaken by VRS, as Ms Alavanou mentioned. Afterwards, brief questions of the audience followed on the conditions of filming in Aspropyrgos, as well as on the VR filmmaking. The event called it a wrap with the screening of six short films by Loukia Alavanou, as part of the spotlight to the Greek visual artist hosted by the >>Film Forward section of the 62nd TIFF.