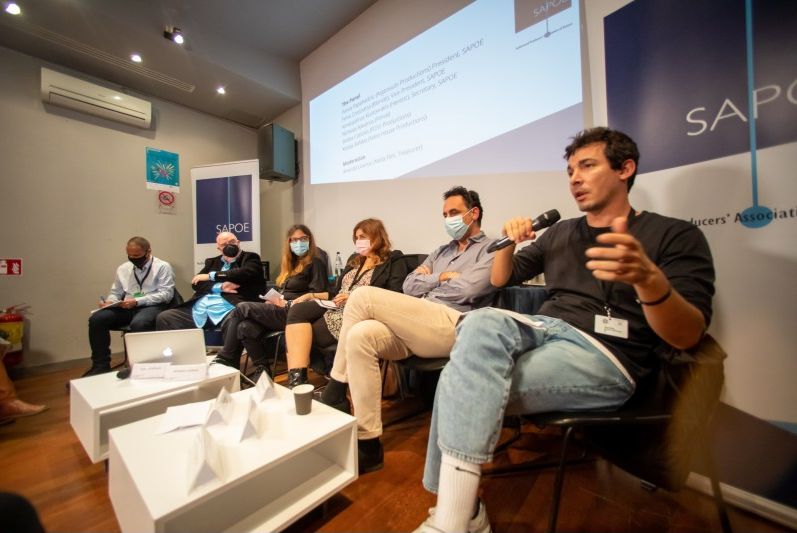 SAPOE: A talk about the landscape of film production in Greece

In the framework of the 62nd TIFF Agora events the discussion "SAPOE (Audiovisual Producers’ Association of Greece): Greek producers present Independence in Action. A discussion on films and shootings in Greece" was held on Sunday, November 7th at Takis Kanellopoulos theatre of the Thessaloniki Cinema Museum. Panos Papahadjis, (Argonauts, President), Fenia Kossovitsa, (Blonde, Vice President), Konstantinos Kontovrakis, (Heretic, Secretary), Nikolas Alavanos, (Filmiki), Kostas Kefalas, (Faliro House Productions) participated as speakers on the panel. The discussion was moderated by Amanda Livanou, (Neda Films). Initially, Amanda Livanou presented the speakers, thanked the Festival people by stating that the market is constantly changing and producers are forced to make several adjustments in their work. Then, she gave the floor to Panos Papahadjis, President of SAPOE (Audiovisual Producers’ Association of Greece).

Mr. Papahadjis also thanked all Festival people for their hospitality, and referred to the motives and fees of producers in Greece. He talked more specifically about cash rebate, the refunds granted to producers for their projects. He also referred to the shootings of David Cronenberg's latest film in Greece, a co-production of Argonauts SA and the Canadian company Serendipity Point Films.

Konstantinos Kontovrakis then took the floor stating that the 62nd TIFF is a case study for Heretic company production and co-production models. The company presents 3 films in Thessaloniki: Do Not Hesitate, Daughters and Mediterraneo. “The Greek Film Center is the key vehicle for Heretic's co-production, a key tool for the creation of co-production infrastructure. It is a national film institute whose presence is pivotal. Cash rebated can be granted only for budgets exceeding the amount of 100,000 euros. A film of a lower budget is not entitled to a relevant refund. Greek cinema has to be outward looking, with a European perspective. All the existing tools, as funding from the European Union but also from the national funds, should definitely be used. Cash rebates from Greek Film Center have increased significantly for small co-productions, nevertheless they continue to be rather low”.

Then, Ms. Livanou referred to the role of the banks in the process of refunds - not particularly willing to do their part, one might say - and gave the floor to Nikolas Alavanos from FILMIKI, a company that deals with television productions, an area different in structure than cinema, especially in terms of funding. Mr. Alavanos also talked about the importance of cash rebates on television, as they triggered the recent boost of Greek television. He also highlighted the idea of factoring, a process where banks mediate and give back money to TV producers through invoices, with a low interest rate. At this point, Mr. Kontovrakis commented that in film productions there is no such possibility, as they operate under contracts and not with invoices.

Ms. Livanou then gave the floor to Kostas Kefalas, from Faliro House Productions, who spoke about the attempt of the film industry and community in Greece to grow although it is confronted with a lack of human resources. He pointed out the need of Greek film industry to get involved in major international productions, in order for the Greek professionals to experience new challenges. “Bureaucracy is a big issue in Greece, though things have changed over the last 20 years, mainly due to the higher level of professionals’ education”. Then, Fenia Kossovitsa of Blonde took the baton, also referring to cash rebates and the need for professionals to know exactly when the refund will be rendered. “The need for citizens, institutions and film professionals to work together for a more harmonic cinematic ecosystem is vital. The final goal is to achieve the broadening of the Greek audiovisual sector”, she stressed out.

Mr. Kefalas, from Faliro House Productions, replied as follows to a question about these big productions carried out recently in Thessaloniki, productions that did not interact financially with the local community: “Producers long for the development of the local ecosystem. Greece is a pole of attraction beyond the boundaries of the European Union”.

Mr. Kontovrakis added that Thessaloniki has a significant film activity, through the most important Greek Film Festival and through the only Film Museum in Greece – but all this falls flat in terms of benefits for the local economy. “Nothing really stays in the city of Thessaloniki. Cinema and film productions need to become an organic part of the city, it is necessary to to increase the rate of refunding on film productions and to prioritize Greek technicians and professionals. Professionals should take precautions; correct the problem of cash flow in film productions and deal with the bureaucracy setbacks. It is also necessary to properly for the rising professionals to develop a certain set of skills and qualifications”, he concluded.