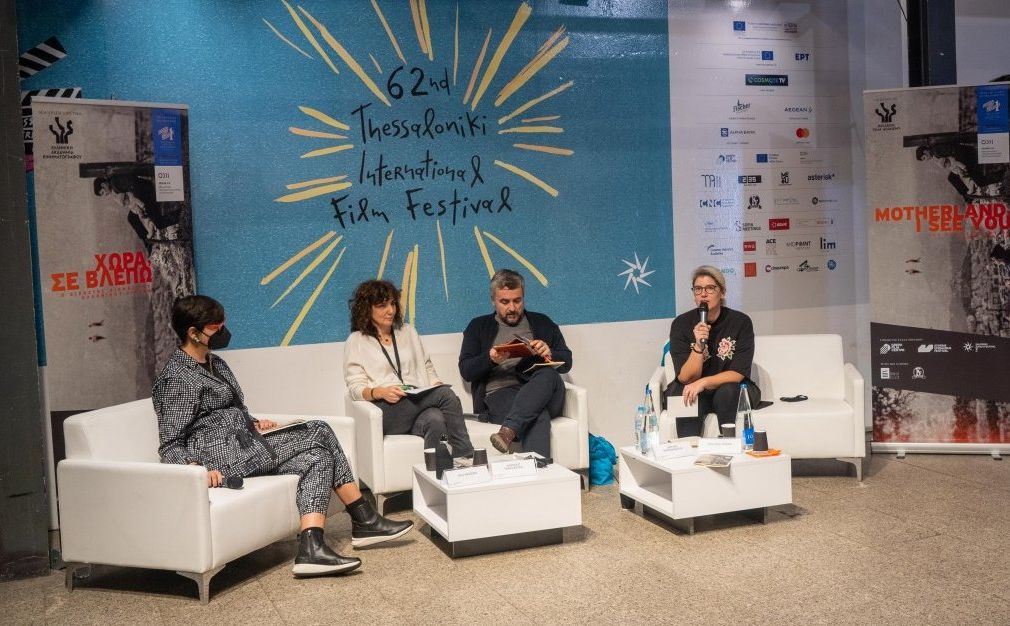 Presentation of the “Motherland, I See You” publication by the Hellenic Film Academy

The book presentation of the publication “Motherland, I See You” by the Hellenic Film Academy was held on Sunday, at Warehouse C. The book, which will soon be released by Nefeli publications, was presented by Dimitris Papanikolaou, assistant professor at the Law Department of Oxford University, Aphroditi Nikolaidou, assistant professor at Athens University, Geli Mademli, coordinator of publications for the Thessaloniki Film Festival and researcher at Amsterdam University, while Phaedra Vokali, general director of the Hellenic Film Academy, coordinated the discussion.

“Our action attempts to bring all the artistic buzz around Greek cinema closer to the way we perceive the history of Greek cinema. We are here to talk about “Motherland, I see you”, which was initiated by the Hellenic Film Academy and has presented a series of films in different film festivals, and will also present a small selection at this year’s Thessaloniki Film Festival. Another selection of films was presented in Thessaloniki and in Athens earlier on, while it will also travel in other cities of Greece, as well as worldwide”, Dimitris Papanikolaou explained, and opened up the discussion on the book presentation.

“Another section of this initiative refers to the creation of materials, which will travel to foreign and Greek universities, and a bilingual Greek and English publication of a book, which revisits Greek cinema of the 20th century and approaches it in a different way. “Motherland, I See you” was an attempt made by Syllas Tzoumerkas, Elina Psykou, ourselves and by many other people trying to discuss the changes in Greek cinema, not only today, but also about the way we rethink the past. My personal view of this is that we see a new dynamics, especially in cinema, which we experience here in the Hellenic Film Academy, with the Festival and the rest of the bodies of Greek Cinema. This new dynamics forced us to have a better view on our relationship to the archive of Greek cinema. We always look back; every festival edition paid tribute to old Greek films, but there is a big difference in the past few years; the audience looks back at the archive in a different, more creative way. Personally, being familiar with the Weird Wave, I started going back, re-watching old films, rethinking the genealogy, rethinking of the ways films are connected, listening to the way the audience discusses these films, but also how directors see their own work: how Alexandros Voulgaris communicates with the past, how Konstantina Kotzamani goes back to a whole genealogy of avant-garde films of Greek cinema. A lot of us who are here have participated in projects that follow the same path, like the “Lost Highway of Greek Cinema”, a team of directors, critics and other people from the industry thought to put films together, to return to them in their own creative way. The way these people searched for the posters, the way the visual material was becoming part of the creative discussion with the past, inspired us for this initiative. If we were to speak about a new period, when the viewer would be more creative, when we would have a constant and active archive of Greek cinema, when a screening of an old film would be an event to behold, when the rescue of a copy would be the talk of the town, if this is a new way of revisiting the history of Greek cinema, a stir in the film archive, then we need to be on the same page and acknowledge that it’s an important and never ending process”, she stated.

After that, Afroditi Nikolaidou took over, pointing out other sides of this initiative. “This initiative includes the digitalization/distribution of the films, the creation of an educational framework so that the films can be forwarded to a new audience, when at the same time, a new audience will delve into the history of Greek cinema will be created. In this way, one festival or many festivals on the move will take shape by the funding bodies and the pool of films. Every time that these festivals are organized, they remind us that we have moved from programming to curating the films, and this is a form of editing; just think about the process of curating and editing a film, which creates new relationships, new close encounters, new meanings, transcribed by the audience”, as she pointed out.

“Also, the timeworn materials and copies are part of the history of Greek cinema. They made us think that we cannot make a book with linear narration. We cannot write a book, which will take a film and correspond it with a text, nor could we tell the writers to have one perspective. That’s how we created a special order of dates, which is not obvious. Each date was the starting point for a critical storytelling”, she mentioned when explaining the structure of the book.

As to the special way of choosing the dates for the new book in combination with the essays that go deep into the history of Greek cinema, Mr. Papanikolaou went on to explain the very interesting flow of the book with examples. “We asked people to tell us stories, a critical storytelling on Greek cinema, and we ended up with a series of dates which are connected to an essay that explains what’s behind it. For example, we picked the scene where Pavlos Zannas decides to translate Proust. And then we open a circle of an essay that refers to the moment, in 1968, when Pavlos Zannas, at Aegina’s prisons, decides to translate the In Search of Lost Time. Having this moment as a starting point, we discuss the whole period of cinema during the dictatorship; what happened to Pavlos Zannas, what happened after the dictatorship and during the regime change, how cinema changes drastically, and how Pavlos Zannas’ views on the festival change, for example”.

In the end, Geli Mademli, who participated in the book, took over the discussion. “I instinctively thought of the paths I would like to take and not take in order to say everything I want to say about Greek cinema. I didn’t want to talk about the issue of representation, because it encompasses a tint of judgment in it, a piece of autonomous representation of a few communities, some rules we might have to rethink. Of course, the representation part, the piece that we see on the screen is at the same time a result of a chain of interactions, and we are here to discover this”, Ms. Mademli pointed out.

“We also look at how a funding body that has a voice defines the text, chooses the politics or plans actions and the partaker of the cultural heritage, an emancipated viewer, an emancipated exhibition visitor affect each other. In this frame, I thought that it would make sense to describe my visit to Thessaloniki Cinema Museum. A museum, which is located in a building that embodies the history of the city. What impressed me the most was that each time I visited the museum, there were kids playing with the big projector located at the entrance of the museum like it’s a war machine. What I’m discussing in my text is how different is the way we approach this technology, which is anonymous, something like a monument, which launched as the first Greek machine “Athena”, the machine that introduces the visitor to the corridor of a film and places them in the heart of Greek cinema. It is important, especially when thinking about the old and the new, the analogical and the digital as homogenized sections, to think that there are so many variations and shades and so many different ecosystems that have technology as the starting point. So, this opening, especially on the initiatives taken by the bodies that discuss what is a rule and what’s not and how we can get away from them, is an exceptional initiative and I am happy to be part of it”, she concluded.

MOTHERLAND, I SEE YOU is an initiative of the Hellenic Film Academy dedicated to salvaging, digitizing, screening, and studying 20th century Greek films, under the auspices of the “Greece 2021” Committee. The project is sponsored by the National Centre of Audiovisual Media & Communication (main sponsor), the Greek Film Centre, the Athens Epidaurus Festival, and the Thessaloniki International Film Festival, and with the support of the Greek Film Archive and Finos Film. The eight films, which will screen with free admission at 62th TIFF, are completing the screenings marking the restart of Olympion, at the end of last September.More specifically, from 30 September to 6 October, Olympion hosted seven films of the initiative “Motherland, I See you”, giving the audience the chance to get to know the initiative for the first time and enjoy the landmarks of Greek cinema.The films from the tribute invite us to an exciting journey in time and space, not only in the national cinematography, but also to a whole country. In the films of the Greek filmmakers, one (and many) different ways of answering the question “what is our motherland?” are reflected.