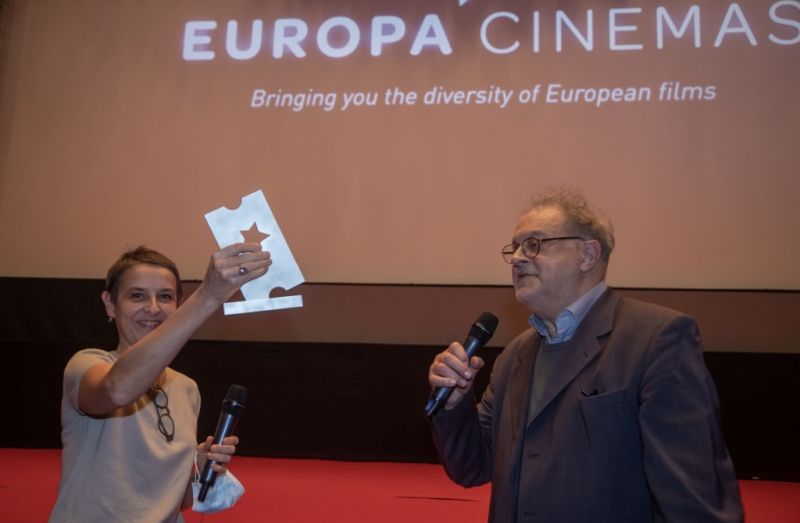 On Tuesday, November 9th, the Europa Cinemas 2020 Best Programming Award was bestowed to the movie theatres of the Thessaloniki International Film Festival, at the packed Olympion theatre. The award ceremony was held prior to the screening of Gaspar Noé’s film Vortex.

Initially, Michel Demopoulos, member of the Board of Directors of the EUROPA CINEMAS film theatres’ network, took the floor to award the prize. "This sold-out screening brings me back memories. I just wanted to mention that I am awarding this prize, as a member of the Board of Directors to EUROPA CINEMAS, a network of film theatres of around 1,200 theatres and 3,000 screens in Europe, established in 1992. The agency is supported by the European Union both financially and in terms of communication, organises a series of activities and awards each year, such as programming and film awards, a management award, award for the actions aimed at young audiences and an innovation award. In 2020, the award went to the Festival, for the programming of 2019, because as you know in 2020 everything was closed because of the pandemic. EUROPA CINEMAS tried to support, with its activities, the film theatres in this obscure and difficult time. We decided to carry out this award ceremony this evening, here in this theatre. I think that now it's a very good timing", Michel Demopoulos said.

Afterwards, Elise Jalladeau, the General Director of the Festival, took the floor and thanked the EUROPA CINEMAS film theatres’ network for the award. "Good afternoon, I am very happy to receive the EUROPA CINEMAS award on behalf of the entire Festival team, of the programming team, but also on behalf of all the colleagues working every day to make our film theatres look as good as possible. It is, of course, receiving this award in 2020, in a year when film theatres were closed for a long period of time, has a strange feeling to it. But I think it is also a reward for our efforts to maintain dialogue with the audience at that time, in any way, with a multitude of programs and initiatives. Confined in our homes, because of the lockdown, we kept the paths of communication with the audience open, so that they could quickly find their way back to the film theatres. Many thanks to the EUROPA CINEMAS film theatres’ network and especially many thanks to Michel Demopoulos who honours us tonight with his presence. You know, Michel Demopoulos, as the director of the Festival, made the Festival International in 1992, while in 1998 he brought it to its home, here at Olympion theatre. I wish you pleasant views and Festival and we are waiting for you in the annual activity too", she said, concluding her introductory speech.