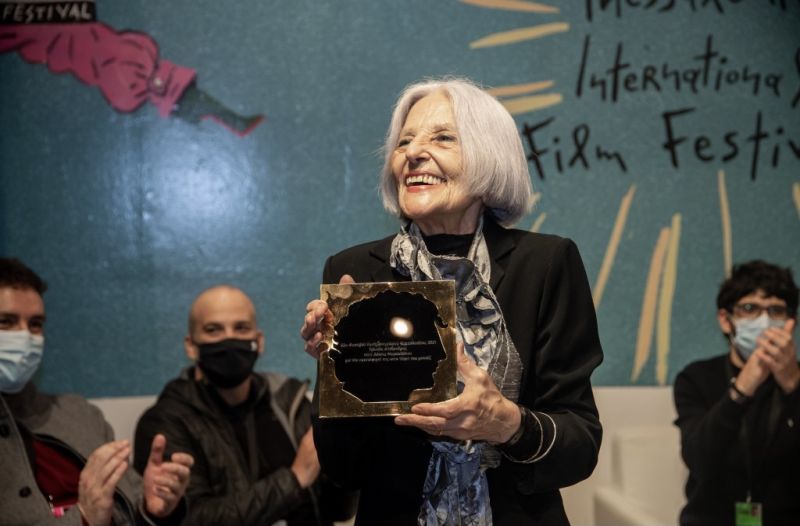 Despo Maroulakou, film editor, was awarded with an honorary Golden Alexander during the presentation of the action "Meet the Future", part of this year's great special of the festival "In the Cut: Editing and its Secrets", at Warehouse C, on Wednesday, November 10.

Despo Maroulakou’s award that opened the evening, was prefaced by Orestis Andreadakis, the artistic director of the festival. "It is an honor to have with us one of the leading editors in the history of Greek cinema and one of the first women editors, who has been working in Greek cinema since the mid-70s. She collaborated with renowned directors, such as Takis Spetsiotis, Stavros Tornes, Costas Ferris, Christoforos Christofis, Lefteris Xanthopoulos, Maria Gavala, Eleni Alexandraki, Kostas Aristopoulos, Nikos Kornilios, Lila Kourkoulakou. She is one of the pioneers who questioned the stereotypes of a male-dominated field. In 1993 she won the Editing Award at the Thessaloniki International Film Festival with the film Starry Dome. It is an honor to award her with the Golden Alexander for her overall contribution to Greek cinema", Mr. Andreadakis said.

Despo Maroulakou then took the floor and shared thoughts, memories and experiences with the audience from her long journey in editing. "I would like, first of all, to make a special mention to two directors I really appreciated and worked with. They are Stavros Tornes and Kostas Sfikas, who were experimental directors, real creators who have passed away. We have to be devoted to our profession, it’s what we do in our lives, especially in editing, which is a time-consuming task, with many happy moments, but also difficulties, we have to accept and move forward".

She then looked back on her experiences to talk about the difficulties of editing." I have been sitting three days and nights in a row on the editor’s chair. I have worked on Christmas Day and I couldn’t find the time to be with my family because I had a deadline to meet. I have slept on the floor, on the muviola, around seven and a half in the morning when the sun comes out; at that point it is not sleeping anymore, it is fainting. I began to do the mixing on Christmas Eve and after having spent two sleepless nights, I thought that the ground was higher than usual when I walked down the street. Editing is the last stage of the film, so it pays the price of all the time lost in-between. It is, let me say, like the bride's dress, it’s there for a specific time and day. These difficulties, however, leave you with a sense joy and fulfilment, mostly personal, not professional. Don't expect awards, this is not the case for editing", she said.

Finally, Mrs Maroulakou referred to her relationship with Greek cinema. "I was fought a lot by people in Greek cinema, because I was an outsider. I have been awarded once and one other time they flipped the coin and I took the award by chance. They stood against me because I didn't agree with the established opinions in this work. I didn't agree with all established things and they held it against me because I was the first woman to be educated, not only as a filmmaker, but also as a person in general", Mrs. Maroulakou concluded.

After Despo Maroulakou’s award, in the second part of the event, the younger generation of Greek editors, participating in the action "Meet the Future" of the 62nd TIFF, presented the show reels of their work. Orestis Andreadakis, the artistic director of the Festival, preluded the presentation: "And now let's take a look at the new generation of editors, those who leave their mark on the national and international stage. This is the third time in a row we have been organizing the Meet the Future program, an initiative of the Festival aiming to support and promote the work of Greek professionals in cinema. This year, as part of the tribute to editing, the program is devoted to the art of editing," he said.