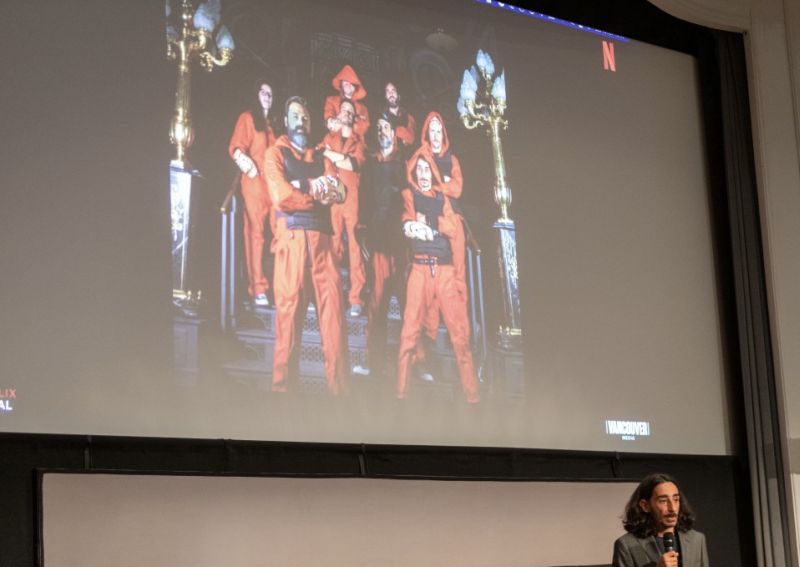 Raúl Mora, editor of the super-hit TV series La casa de papel, gave a masterclass on collaborative editing in fiction, on Saturday 13 November, at Pavlos Zannas theater, as part of the tribute “In the Cut: Editing and its Secrets” hosted by the 62nd TIFF. In the opening of the event, he thanked Thessaloniki International Film Festival for the hospitality, explaining that the job of editor is not as recognized as it deserves.

“I would like to thank the Festival for choosing to focus on editing. I am happy because as an editor, our visibility is not that big”, he stated. Later on, he spoke about his artistic journey until today. “I haven’t studied editing. I started with photography, but soon I realized that in this field I would never satisfy my creativity. That’s why I got into the cinema industry and fiction. I have worked on various fields of editing, like trailers, promotional videos, informative clips, where deadlines and timetables are different. In a TV series like La casa de papel, you have to say what you want to say effectively, in the least amount of time. I am lucky that this TV series came into my life. It changed the conditions of my work”, he pointed out.

Later on, Mr. Mora talked about the famous TV series: “It is a mainstream show, for a wide audience, but it has a specific identity. The characters are its main focus. The script is built to encompass the perspective of each character. It might not be the most sophisticated product. However, the plot creates powerful emotions to the viewer. The series had a mass appeal, which had a positive effect in the career of everyone involved”, he pointed out. At that point, Raúl Mora explained how Netflix changed the rules of the game in editing for fiction films and series in his country. “When the streaming platforms, like Netflix, arrived in Spain, they changed the way we work with fiction. In the national market, we had many restrictive factors, which made most of the editors feel uncomfortable. Also, in Spain, for many years we had TV series 70 minutes long. La casa de papel was not an instant hit, as it stopped airing for a while. Then, Netflix asked to re-edit the 70-minutes episodes to a duration of 50 minutes. That was when the show started to pick up in Spain. And now everyone is following this route, because they want their work to reach out to as many people as possible. In Spain, I must say, platforms never made the big buzz like it happened worldwide”, he clarified.

Later on, Mr. Mora focused on the methodology of editing in fiction. As he explained, in the TV series La casa de papel, editing aims at evoking feelings to the viewer. “It is very important to take into consideration the viewpoint of the viewers themselves. We try to create a narrative that doesn’t let them take a breath or distance themselves. We try to understand what the viewer will feel in every case. We establish a relationship with the viewer, so that we increase their need to watch more of what we offer. In this show, everything is highlighted. We have sequences with action or comical elements, but always at the end of the episode. We want to evoke the most striking emotions to the viewer. The rhythm is ruthless, we have to condense all the emotions in a limited time. This is why the cut has to be fast, there is no other way. We want the viewer to enjoy the show”, he pointed out.

Mr. Mora spoke about the challenges of editing a series like La casa de papel: “You can't work directly in a sequence, in linear order. In the beginning, I did everything in order. I was taking a sequence, I worked with the material, I added the music. With the limited time we had, I understood that this was not the best way to work. So, we worked the other way around. You want to have the first cut of the script as soon as possible. The most important thing is the entire episode, not particular sequences or specific moments of the action. We have to work very fast, since each team is connected to the others. The work is not over and out in the editing room. The post-production team is affected when delays in editing occur, just like the special effects team. The show has plenty of special effects and the shots with special effects take a long time to prepare. The faster you do the editing for the sequences, the smaller number of shots you have and you help your colleagues”, he explained.

As far as the pressure of time is concerned, Mr. Mora referred to the great importance of collaborative editing in fiction. “The job wouldn’t have been done if we were not six editors. These people are my family. It is a complicated TV series with an extremely high-pressure timeframe. We all had to work together and do it effectively, and we succeeded”, he added. As he explained, collaborative editing enriches fiction though the different creative perspectives. “All of the editors, we are very different from each other, we have different cuts. Some of us like action more, some others prefer dramaturgy. This combination was part of the editing success for the show. You collaborate with people who have different perspectives. They make additions that you wouldn’t think of by yourself. The content is enriched with the unique viewpoint of each one of us. We all watch the work of each other. We create a sequence with a specific music and at some point, someone knocks on the door and asks “Why did you add this music? It might have to go somewhere else!” We usually sit during our break, in the lounge room, and discuss. In this room, more solutions and ideas came forth than in the editing room”, he pointed out.

As he said, it is a pleasant surprise to work with other people, especially in such a lonely profession like editing. “As an editor, you work in a room with four walls, alone, day and night. You feel overwhelmed. Editors are lonely people. The fact that I worked with other people made my job feel like a celebration”, he stated. Following, Mr. Mora juxtaposed a few edited and a few non-edited scenes, to show the work of the editor. At the end of the screening, he got emotional and stated: “Every time I watch the sequences, I am blown away because I rewatch what we did and I get emotional. We had a great time doing this job, even though it was extremely hard. Atmosphere is an important element; having fun. When the team is having a good time at work, it is reflected in the result. There was a lot of passion on our side. I honestly love my job”, he pointed out.

In a question posed by the audience on the relationship between screenwriters and editors, he replied that it is a relationship based on collaboration and freedom. “As editors, we do our job, showing also our tremendous respect for the script. We discuss and talk with them. Many times, as an editor, you don’t have the freedom to intervene in the structure or suggest a change, so I would like to thank from the bottom of my heart the team of screenwriters, who allowed me to intervene in such a way. When you see that your own creativity is taken into consideration, that’s the real reward”, he stated.