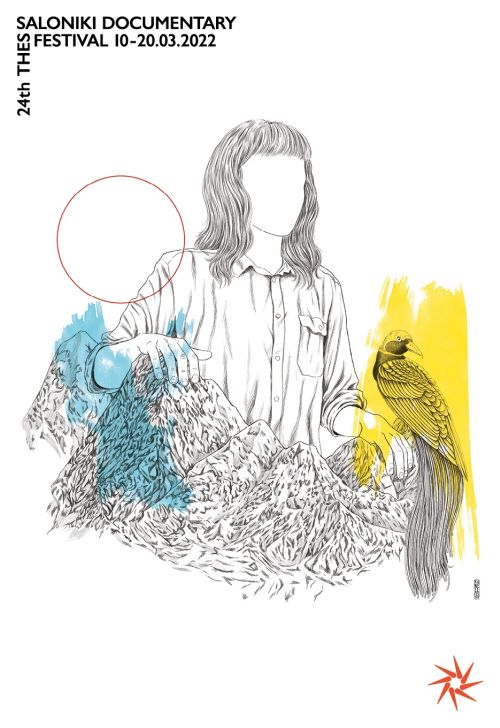 The visual identity of the 24th Thessaloniki Documentary Festival

The poster of the 24th Thessaloniki Documentary Festival bears the signature of Illustrator and comic artist, Kanellos Cob. The multifaceted creator was also responsible for the original illustration and the art curation of the special Thessaloniki Film Festival 2021 edition, antidoron.

The reasoning behind the poster of the 24th TDF

A human form, wild nature and an exotic bird etch the outline of human condition, of our life, of the world we are surrounded by. A symbiotic relation, in which we seek to recapture the essence of coexistence, so brutally wounded by the human kind. This relation is not solely portrayed in environment-themed documentaries, but in every work that reminds us that the notion of dominance is a strictly human byproduct.

Kanellos Cob was born in Athens, in 1985. In 2010, after graduating from the Technological Institute of Athens’ Department of Conservation of Antiquities and Works of Art, he went on to study illustration and comics at the École Émile Cohl, where he obtained his degree with merits. In 2012, he took part in the “Moebius” mural, while in 2013 he published his first children’s book, titled L’arbre (published by Les Mains Sales). In 2014, he began working as an illustrator of articles for the magazines Acteurs de l’économie, La Tribune and myTOC.fr. In 2016, he published the comic book Tout nu et tout bronzé (published by Épicerie séquentielle), while in 2017 he contributed to the comic editions Guide de Paris and Histoires du timbre en BD (published Petit à Petit). In 2018, he published the comic book Goodbye Batman, written by Tassos Theophilos (published by Red n’ Noir), bestowed with the Audience Award at the 2019 Greek Comic Book Awards. In the same year, he teamed up with the magazine Blue Comet and started working as an illustrator for various journals in Canada (Québec Science), France (Reliefs, Lyon Capitale) and Haiti (Revue 360). In 2019, he took over the artistic direction of the Hadra Trance Festival in France, while publishing the graphic novel The Beggar by Andreas Karkavitsas (published by Polaris). In 2021, he designed the comic book Bare Bones, written by Dimosthenis Papamarkos (published by Polaris).