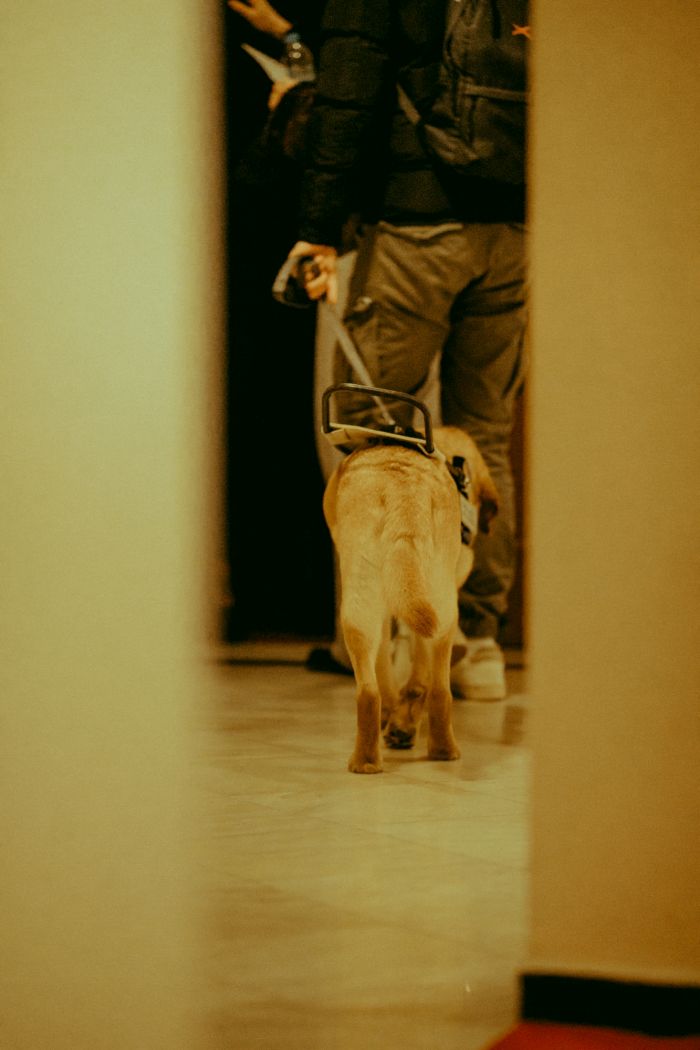 The universally accessible screening of the documentary The Grocer (2013) by Dimitris Koutsiampasakos was held on Saturday March 12th, at Olympion, marking the first universally accessible physical screening in TDF’s history (following last year’s online screening of the documentary When Tomatoes Met Wagner). The film was screened with audio description [AD] for the blind and visually impaired and SDH [Subtitles for the deaf and hard-of-hearing].

In collaboration with the Center for the Education & Rehabilitation of the Blind, the universally accessible screening of this year’s TDF was also available in Braille, while one of the Festival’s spots featured an audio description. This screening, as all universally accessible screenings held within the framework of both Thessaloniki International Film Festival and Thessaloniki Documentary Festival, was carried out in collaboration with Alpha Bank, the Festival’s accessibility sponsor.

Prior to the screening, the Festival’s artistic director, Orestis Andreadakis, welcomed the audience and thanked Alpha Bank, the Festival’s accessibility sponsor, as well as the director, Dimitris Koutsiampasakos. The floor was then taken by Dimitris Koutsiampasakos, who thanked the Festival for hosting a universally accessible screening of his film. “I am so thrilled to see so many people, I am very honored by your presence here today. The Grocer, after so many years, is continuing its journey. It insists on visiting places, building human bonds and taking on a role much greater than the one of a grocer. This is very important, in a world that is becoming grimmer and grimmer every day”, he added.

The screening of the film was followed by a Q&A with the director. Dimitris Koutsiampasakos took the floor and shared stories from the shootings of the documentary. “I hadn’t watched the film in a very long time. Some of the protagonists are sadly no longer in life. Documentary as a genre includes no script, in contrast to fiction films. However, I wanted to stick to the main hero’s schedule all year round. The shooting lasted for a long time, more than a year. The people were comfortable with me because I come from those places, so they opened up before the camera,” he mentioned.

Afterwards, he stated that the community spirit survives even within the urban context for those who left their village. “Every time, we returned from those places filled with courage and strength. Unfortunately, some of the villages depicted in the documentary have been deserted. All the residents of Pachtouri now live in Athens, in the same neighborhood, somewhere in Ilioupoli. They have named the streets after their village and they all hang out together in the same traditional coffee house, reminiscing about their village”.

Finally, Dimitris Koutsiampasakos shared a funny story from his documentary’s final days of shooting, when time had come for him to screen the film at the central square of Mesochori. “It was the 15th of August in Mesochori and the square was packed. After the end of the screening, I handed the floor to the audience. I was very stressed. An old lady stood up and told me that I am a bad director, because I left her out of the final cut. After I explained to her that I had to cut many shots including many people, she replied: “Not only are you a bad director, you are an idiot as well. With all this footage you shouldn’t have made a documentary, you should have made a TV show”. In the end, he thanked the audience, the Festival and especially the students of AUTh’s Film School who supported him through their presence at Olympion.

Nikos Anastasiou, a Greek traveling grocer has been making the same itinerary with his wife Sophia since 1980. Once a week, all year long, starting from Trikala city they visit the abandoned villages of the SW Pindos mountains, a 75 kilometers drive. In the past few years, their two sons, Kostas and Thimios, have helped them. The documentary follows their journey through the changing of the seasons, morphing into a fascinating and often touching road movie about a little-known side of Greece.