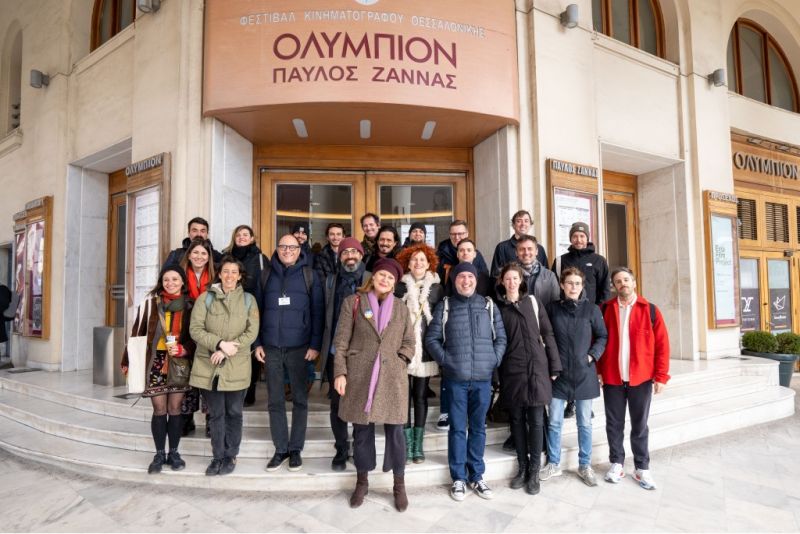 The projects of Thessaloniki Pitching Forum, also available online for the accredited guests of Agora, were presented on Monday, March 14th, at Pavlos Zannas theater, as part of the Agora Docs of the 24th Thessaloniki Documentary Festival. Agora Docs, as every year, hosts a series of actions, aiming to boost the Greek film industry production and strengthen documentary filmmaking in the wider geographical region. Thessaloniki Pitching Forum is the co-producing and co-financing platform of the TDF, offering the participants the opportunity to discuss their projects, receive feedback and advice during an online two-day lab. Then, they present their project at the one-day Pitching Forum to an international panel of experts and have individual meetings with top-notch film professionals.

Initially, the Head of Agora Docs, Yianna Sarri, thanked all the contributors for their participation, as well as the panelists for their first physical appearance after two years of not attending due to the pandemic. “We also thank the sponsors, without whom none of this would be possible”, she added and handed the floor to Élise Jalladeau.

The Festival’s General Director, Élise Jalladeau, expressed her enthusiasm for the guests’ physical presence at the 24th TDF and for the realization of physical screenings and activities. She also referred to the Agora awards and the goal of supporting young filmmakers from Greece and from around the world. “Last June everything had changed, even the weather. This year, it is all different. I would like to draw your attention to the EVIA FILM PROJECT, part of a broader plan for the sustainable rehabilitation of Evia, after the damaging fires. The EVIA FILM PROJECT will be carried out between June 16th and 19th, with open air screenings. The question of sustainability and environmental awareness is critical and affects us deeply”, she concluded.

The EVIA FILM PROJECT, carried out with the support of the Region of Central Greece, places Evia in the spotlight of Green Cinema, kicking off the TFF’s Green actions. It is an innovative, developmental, environment-oriented program, aiming to culturally reboot Evia through the creation of international cinema interest for the exchange of ideas and film market activities, focused on the environment, the climate crisis, and its disastrous repercussions. The program sets out to highlight Evia as a global-scale hub for “Green Cinema”, offering the chance to filmmakers and producers from all over the world to showcase their film projects for the first time.

Afterwards, the coordinator of the discussion, Rada Šešić, took the floor and thanked the panel, the sponsors and the Agora professionals. “We will watch 13 interesting and thought-provoking projects. The filmmakers do not just look for your money, they need your ideas, your feedback and your advice”, she added.

The Pitching Forum Awards are the following:

Onassis Culture, as a strong supporter of Greek independent cinema and a steady collaborator of TFF, is bestowing the Onassis Cinema Award to one of the Greek projects that participate in Agora. This year, the established awards of the Thessaloniki Pitching Forum are: The Thessaloniki Pitching Forum Award (2,000 euros), the ERT – Thessaloniki Pitching Forum Award (2,000 euros) bestowed to a Greek project, the Mediterranean Film Institute Award (MFI Script2Film Workshop), that offers a 2,000-euro DocLab scholarship, as well as accommodation in the islands of Nisyros and Rhodes where the MFI takes place), DAE - Documentary Association of Europe Award (Consultation and free membership), the Aylon Productions Digital Services Award (Digitization by Aylon Productions) and the Beldocs Award (Accommodation and accreditation for the next International Documentary Festival Beldocs in May 2022).

This year’s panel of financiers include among others:

The Thessaloniki Pitching Forum International Jury is consisted of:

The tutors for the online project enhancement workshops are:

Τhe projects of the Thessaloniki Pitching Forum are the following:

PEOPLE IN MY HOUSE