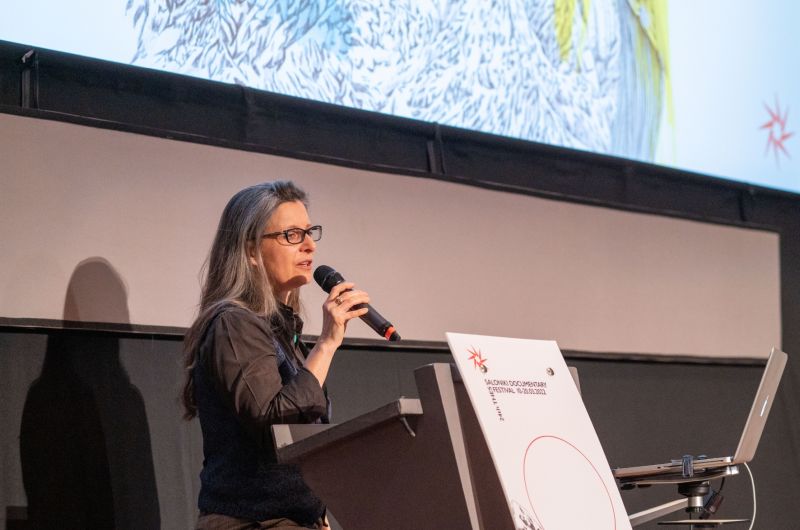 French documentary filmmaker and sound artist Frédérique Pressmann delved into the evolution, the tools, the particular features and the various genres of sound documentary, as well as the differences between sound and film documentary in the masterclass “Writing with Sounds” she delivered on Tuesday March 15, at Pavlos Zannas theater, within the framework of the 24th Thessaloniki Documentary Festival.

Frédérique Pressmann was welcomed on stage by Christos Goussios, Assistant Professor at the Film School of AUTh’s Fine Arts Department. Initially, Mr. Goussios thanked the audience and expressed his gratitude to TDF for this audiovisual educational opportunity, via which the audience has the chance to rediscover the art of radio documentary with the guidance of a renowned guest. Then, he handed the floor to Frédérique Pressmann. “The genres of soundscape/radio documentary are interchangeable, there is a variety of terms that describe similar genres. Most of you are familiar with podcasts. There is a misunderstanding: podcast is not so much a genre, as a transmission tool with various individual genres, such as fiction, talk shows, sports. It includes mainly narration, with some sound effects”, Frédérique Pressmann mentioned initially.

Afterwards, she referred to Aris Dimokidis’ article for TDF’s A-Catalogue, titled “The Rise – and further rise – of sound documentaries”, discussing how sound, in parallel to image when it comes to visual documentaries, can be used as a narrative tool: “As it becomes evident in Aris Dimokidis’ article, a lot of things existed before the internet and cannot be attributed to this development. We can just say that they evolved”, she said respectively. “I have experience in the field of both visual and sound documentaries. I always know which one fits better in each case. In my opinion, most of the information we receive is visual. However, some images remain redundant. Narration in such cases has to do with sound, while images merely contribute as a type of illustration. We live in a world that is clearly saturated by images. Working exclusively with sound is refreshing: sound gives more room to imagination. In the words of Orson Welles: “Between radio and cinema, I prefer radio, because it has a bigger screen”, she distinctively said.

Sound is lighter and less intrusive, Frédérique Pressmann explained: “It is much easier to work with sound equipment than with film equipment. It is way less expensive, too! You usually work by yourself, or with one or two more people maximum, so you become all the more flexible. In any case, whether the documentary is visual or audial, the purpose is probably the same: to share a point of view with the world, to tell a story. They both have a common core, a script of some kind, which signifies the story’s ultimate goal (and assists in finding a producer). Documentary is all about perspective and point of view. This view is often unclear and non-discernable, it occurs probably in an organic manner, through the narrative elements. The difference between documentary and fiction films is that the former is about (re)constructing reality with realistic elements, while the latter has to re-write reality from scratch because it is never guaranteed”, she added.

She went on to speak about the diversity of sound documentary and the liberty that defines it. “There is no image, which means there is more space and more freedom. With sound you cannot create fake scenes, like we can do in films with the help of good editing. When it comes to sound, one can only omit it or “break it up” subtly, so as to shorten a long piece or to change the order in which certain things were said, in creative sound editing. At this point, she referred to the differences between radio documentary and sound commentary: “In a sound documentary you need a lot of time and a strong opinion. You have to find the right form that fits the story you want to tell. Also, documentary requires a lot of (artistic) research and contemplation. The way cinema is not the documentation of a theater performance, radio documentary is not a mere text reading”.

Then, she referred to certain tools that make up the genre of radio documentary. “Interviews are a wonderful and interesting way to receive information. If you handle the interview right, you can get valuable information. Also, what we know as cinéma vérité, situational cinema, in its respective sound edition: following the action without intervening, in the same way that the master of the genre, Frederick Weisman, used to do. Your presence in the room will of course affect the action, yet you must try to be as subtle as possible. Also, what we know as ambience, the creation of an atmosphere with sounds that are not immediately discerned, nor do they communicate a specific piece of information: they just form the frame and create an ambiance (for instance, street sounds or an inaudible conversation). Then there is close up, rhythmic elements in the surrounding space (for instance, a closing door or a typewriter in use). We can also include (creative) editing as a tool, that is alternate editing, in which different sounds coexist and different, or rather constructed, realities coincide. Of course, there is also music, which I personally do not use often. It can be used originally as the score or embedded, like a song coming from the universe you have created. Finally, narration, the most popular tool, which, if applied creatively, can produce a beautiful result. I accept and understand all tools, as long as we don’t turn to them out of boredom. Often I refer to narration as the last resort, exactly because you end up explaining to the listeners what it is you want to say. I like to wonder how I can communicate something, without having to explain it.”

At the end of the masterclass, Frédérique Pressmann presented to the audience four examples of radio documentaries: a documentary of hers, one by legendary Yann Paranthoën aka Sound Carver, one by Mehdi Ahoudig and one by Kaye Mortley.

Who is Who: Frédérique Pressmann

Frédérique Pressmann, a documentary filmmaker and sound artist, was born in Paris in 1966. She started her career in New York in the late '80s as a written press journalist, writing most notably for The Village Voice. Back in Paris in the '90s, she worked as a radio producer, copy-edited in various newspapers and translated books from English into French, and soon moved on to documentary filmmaking. In the meantime, she also produced numerous soundscapes and radio documentaries, working mainly for French public radio. Since 2009, she has also been teaching documentary practice in high schools and colleges in France, among them the prestigious ENS Louis-Lumière. In 2021, she created and led its new Sound Documentary International Summer Program.