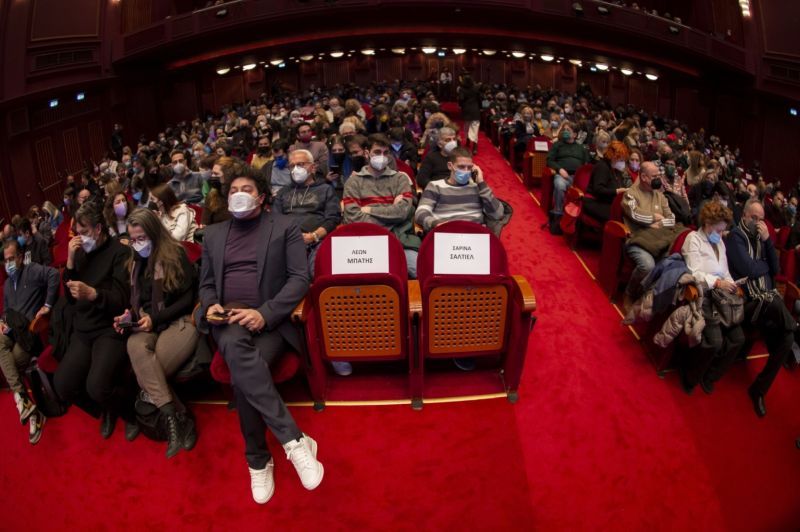 A touching premiere for the film The City and The City by Christos Passalis and Syllas Tzoumerkas, at the 24th TDF

In a heart-wrenching evening event, full of emotion and intense feelings, the film The City and the City by Christos Passalis and Syllas Tzoumerkas returned to its… city, following its world premiere at Berlinale’s Encounters competition section, was screened within the framework of the 24th Thessaloniki Documentary Festival, on Tuesday March 15, in the overflowing Olympion theater.

Prior to the screening, the Artistic Director of the Thessaloniki Film Festival, Orestis Andreadakis, mentioned: “It was March. On a day like today, 79 years ago, on March 15 1943, a train left the old rail station of Thessaloniki, heading to Auschwitz. In this train, 2,400 Greek Jews were piled in the wagons. Until mid-August that same year, 19 more trains were about to lead almost the entire Jewish community of Thessaloniki to death. In total, 45,000 people never returned to their birth town. Among them, Sarina Saltiel, who had just sent a heartbreaking letter to her son, who had fled in Athens. That would be the known-to-all, Maurice Saltiel, one of the people who contributed to the founding of the Thessaloniki Film Festival. Exactly two years later, on March 15 1945, one of those Greek Jews returns home to a devastated country. He has walked his way through Europe, having escaped the hell of Auschwitz. He gathers around him citizens of Thessaloniki, both Christians and Jews, and shares stories about the horror of the concentration camps. His name was Leon Batis. “What you are about to hear, will one day be known to everyone. It will be published and even made into a film”. Today, on March 15 2022, his wish is fulfilled. Here, in the packed Olympion, on the first row, two seats are empty, with the names of Sarina Saltiel and Leon Batis written on them”.

“It is very moving for us to be here in this place, with this film, on this particular day”, Christos Passalis said. “And we are thrilled that The City and the City returns to its city”, Syllas Tzoumerkas added. The initial greeting by the directors was followed by the acknowledgment of support towards all producers and sponsors of the film, a Greek National Opera production, carried out with the support of the grant from the Stavros Niarchos Foundation [www.SNF.org] for the creation of the celebrational program of the Greek National Opera on the occasion of the completion of 200 years since the 1821 Greek Revolution.  Afterwards, producer Maria Drandaki thanked the supporters and sponsors of the film, the Greek National Opera, Stavros Niarchos Foundatio, Thessaloniki Film Festival, Claims Conference, the Greek-German Fund for the Future, the Rosa Luxemburg Stiftung Institute – Office in Greece, EKOME, the Culture Center of the Region of Central Macedonia, the Thessaloniki Israeli Community, MOMus, the Greek Film Center, the Municipality of Thessaloniki, the Municipality of Thermaikos and Athens Film Office.

A Q&A followed the screening, where Orestis Andreadakis asked the directorial duo what was the initial spark for the film. “It all started about three years ago in Thessaloniki. I was with Christos before the screening of The Miracle of the Sarragasso Sea and we were talking about our return to Thessaloniki, and about what we could make in the city so many years later – because we were gone for so long – both of us having been born here. Then we discussed the core body of the film and the pillars were there from the beginning. This film is also a return for us”, Syllas Tzoumerkas said.

To Mr. Andreadakis’ question as to whether the extermination of the Jewish community of Thessaloniki was something they had heard of in their childhood years or at school, Christos Passalis mentioned that “Of course, each one of us is a different case. I knew almost nothing. This lack of knowledge is at the core of the film. Our jumping off point was this raging wondering about how it is possible for one to grow up in this city, and never learn anything about these tragic events”.

To a question posed by the audience about the film’s multifaceted nature and the reasons why the school curriculum does not include this subject, Mr. Tzoumerkas said: “Our job has nothing to do with the educational system, we make films. This is a valid question. But we cannot answer because it’s not our job. We pose the question. We wanted to push film language to its limits and find our own balance. As a whole, the film is an in-between space for me and Christos. At the same time, it is an in-between space for film genres. It is composed and inspired by different film discourses and ends up creating its own”.

Mr. Passalis added: “The film has to offer no answers because neither do we. Your questions are also ours. The film’s hybrid form has to do with the forces that created it. From the very beginning, Syllas and I had in mind that we wanted to tell the story of a community. Secondly, we wanted to portray history as an overwhelming force and as a series of terms and conditions that destroy and crush people. In that sense, this diversity is depicted by historic facts, with elements that are on the verge between fiction and documentary. All of this was necessary for us to tell a complicated story that no one can define. It is human nature that is being portrayed”.

In another question, about the sources used, Syllas Tzoumerkas explained that “facts and figures were collected from various sources and we have read a lot of books. Luckily, for the past twenty years there has been substantial bibliography relevant to the subject. For us, what was crucial were specific details we wanted to highlight, which are enhanced when placed into a movie context. A single line from a book holds a very different kind of power when developed in the span of three minutes in a film. These types of zoom-in and zoom-out were applied during the whole process of the movie, even while editing. We also had a scientific consultant, Giorgos Antoniou, who was by our side every step of the way”.

To another question coming from the audience: “Did you regret the fact that the film is not fiction and does it bear an affinity to your previous works?”, Mr. Tzoumerkas replied: “No, we felt liberated in way that we did not expect and, yes, there is an affinity since we are two people dedicated on a line of themes that are of interest to us”. The next question was related to the inspiration regarding the scenes that bring together Thessaloniki of the past with today’s city. “The idea to narrate the story of the Jewish community of the 20th century but shot in the modern city was the core idea of the film. We wanted time and space to be fluid and undetermined concepts, not something fixed, let’s take for instance the city of 1930s and the people who walk around the city dressed in clothes from that era”, Christos Passalis mentioned. “We wanted it to be like quicksand, so we followed the pattern of dream memory for that to happen”, Syllas Tzoumerkas added. As for what the future holds for them, Syllas Tzoumerkas’ response was short and simple: “more films”, he replied, amidst an avalanche of applause and praise by the Olympion audience.