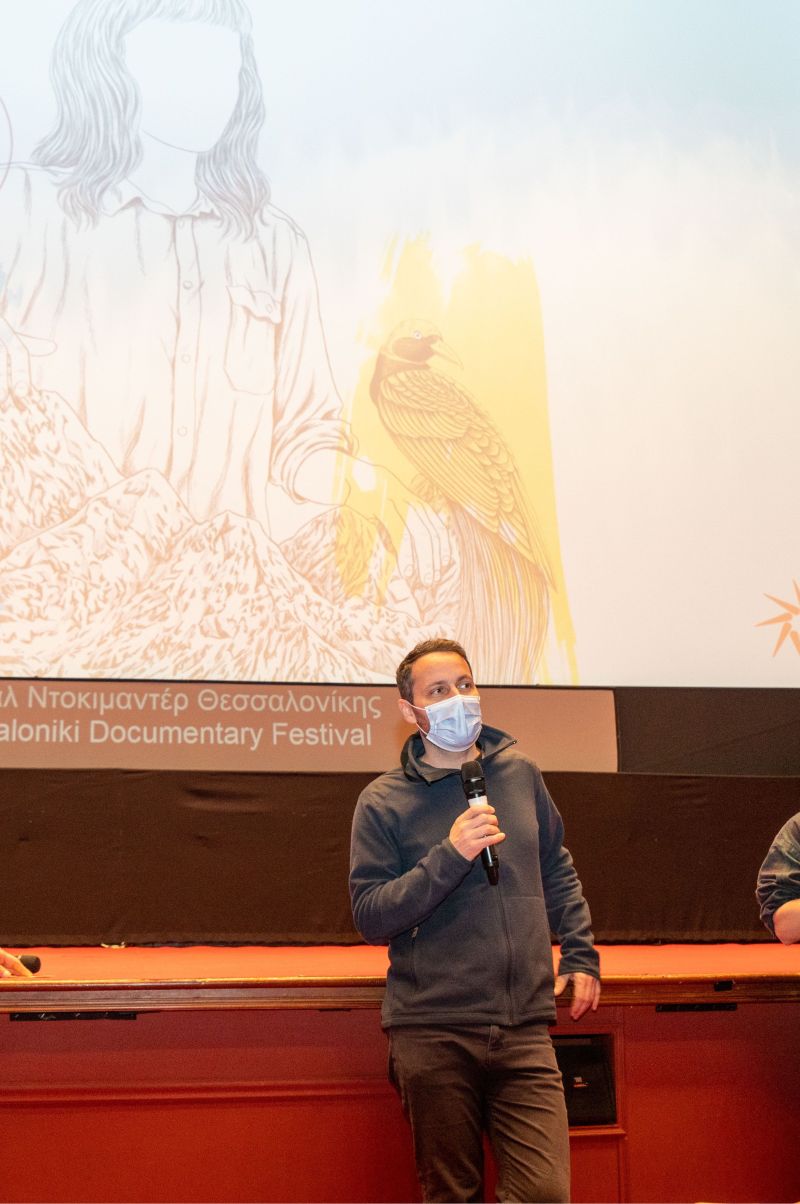 As part of the 24th Thessaloniki Documentary Festival, the documentary A House Made of Splinters by Simon Lereng Wilmont was screened on Wednesday March 16th at Olympion, celebrating its international premiere, in the presence of the director.

After the screening, questions from the audience followed. To a question about whether or not the children’s dialogues are based on a script, the director explained that “there is no script, what you see is their authentic reactions. If you feel that their conversations are too mature for their age, that is because of their experiences. Many children have to grow up abruptly and they gain a wisdom in life much sooner than they have to”. “How come the children are so familiar with the camera?”, another audience member asked. “It took me about 1,5 years of coming back and forth to Ukraine to shoot the documentary. I had to build a trust between us in order for them to react naturally before the camera and to be themselves. Also, it was just me and my assistant during shooting and I have two kids their age, so I like spending time with them, just as I enjoyed spending time with these kids. I wanted to learn as much as possible about them and they love the attention you give them. In the more emotional scenes, they did not feel that there is a stranger in the room but they felt safe I was there because they knew me”, Wilmont answered.

In another question regarding the extent to which he was affected by the emotional moments in his film and whether he is informed about the current state of the orphanage, the director said: “they are the hardest scenes I have ever shot and will ever shoot. One of the hardest things of making a film like that is that while I want to help these kids because I care about them – I got so close to them during all this time – at the same time I hold no power whatsoever. I fight as much as I can and with their stories, I give them a voice, which no one else will do. As for the current situation, when we wrapped up, we wanted to make something more for the kids and we made sure they were seen by two psychologists who specialize on childhood trauma, in order to speak with them often and make sure they are alright. They were the ones who also helped one of the kids in the film to move west, so they’re safe now. Another kid did not want to leave his city because that is where their family is, but it’s not a good place to be at right now”.

About the role of music in the film and whether or not it triggers the viewer’s emotional response, Wilmont responded: “I’m not sure I edited the music in the correct scenes. I never thought I would shoot such a dramatic film and maybe I overdid it with the music a bit because I wanted to highlight the children’s beauty to the maximum. I however think that there is a proper balance”. About the time it took for the film to be edited, the director said that he had cooperated excellently with his editor and that the whole process lasted for about six months.

Another question from the audience was whether or not the issue of alcoholism affects all families in the area. According to Wilmont: “Yes, most of them. There are a lot of social issues in the area, from alcoholism to domestic violence, and as the director of the home told me, there has been a “tsunami” of such cases over the past six years. The war had been simmering for years and the film portrays its long-term consequences. The more “invisible” consequences that war had on more rural areas that are not in the front line. Unemployment and people who are stuck there, who can’t live without the bottle. It is an avalanche of situations and everyone there wanted me to step up and show the world what is happening. There was supposed to be a screening in Kyiv this month, we had invited all VIPs and politicians”.

The director was then asked how he overcame the language barrier and about the techniques he used for sound. In his words: “I know a bit of Russian, so the younger the kids were, the easier it was for me to understand them because I am on the same level as them. Often I would observe beautiful scenes between them or fights that looked so good and then with the translation it turned out it would all be about a shoe. As far as sound is concerned, it’s my Achilles’ heel – if you asked my sound guys they would laugh – since my sound is awful. We spent a lot of time clearing out the surrounding sounds”.

To a comment by a member of the audience that the film resembles Beasts of the Southern Wild, the director replied that it was one of references. As to the children who were adopted, he said that “one of the girls is now with her foster family. For the other, unfortunately, the candidate foster parent changed her mind and did not wish to move on with the adoption, so she had to go to the children's home. But these two girls had built a strong friendship bond while at the home and they still keep in touch, which is really beautiful".

As the war in Eastern Ukraine takes a heavy toll on poor families living near the frontline, a small group of strong-willed social workers work tirelessly in a special kind of orphanage to create an almost magical safe space for kids to live in while the state authorities and courts decide the future fate of the child and family.