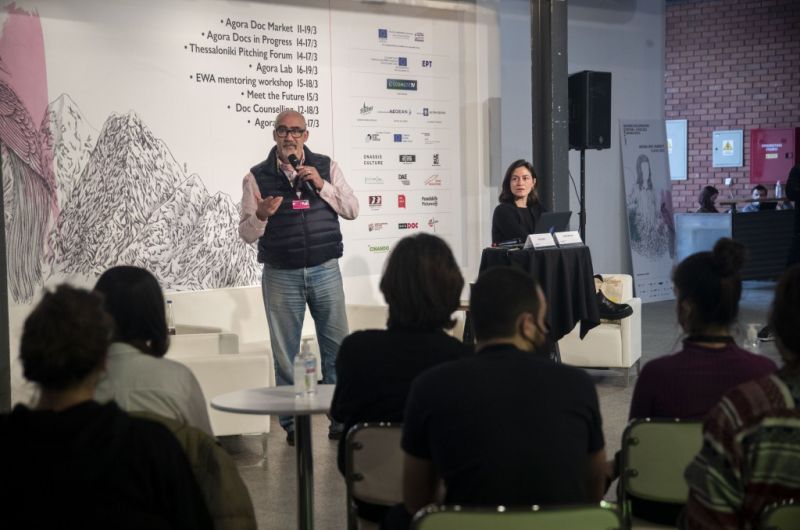 VOD Platforms Talk: Channels in the cloud… A revolution and new business opportunities

The talk "Channels in the cloud… A revolution and new business opportunities”, a presentation of the online VoD platforms (CINOBO, Nok Ze Dok), was carried out on Wednesday, March 16th, in Warehouse C at the Port, as part of the Agora Talks of the 24th TDF’s Agora. Yianna Sarri, Head of Agora, welcomed the audience and introduced the two speakers, Daphne Bechtsi of Cinobo and Guy Knafo, of Nok Ze Dok.

French Guy Knafo introduced Daphne Bechtsi to the audience, and went on to talk about his platform Nok Ze Dok, based in France, the content of which is exclusively documentaries. “The big volume of documentaries on the platform makes categorization necessary. The user can more easily navigate the platform, find the documentary they are looking for or a similar one. We use a technology that is called semantic indexing, which essentially reads the written documentary texts and creates automatic tags, that function as links between various documentaries. We try to understand the taste and the priorities of the user, so as to present them with themes that interest them, and make it easier for them to watch”, he stated.

“A big shift took place somewhere between our fathers’ TV and our mobile phones. Everyone by now knows Netflix, a platform that started off as a DVD seller and a distributor. Most platforms function on the basis of Subscription Video On Demand (SVOD), a service that charges the user monthly or yearly for unlimited access to the platform’s content”, he added.

The VOD service, the “video on demand”, offers the user the opportunity to watch or listen to content when they choose to. This service, used by the biggest streaming platforms of the world (Netflix, hulu, HBO Max, Disney+), is also used by Greek platform Cinobo, which that became available two years ago, with the advent of the first lockdown of 2020. “When we launched Cinobo, Greek media presented us as the Greek Netflix”, Daphne Bechtsi, the general director of the platform, commented. “We use sVOD, but we differ in terms of anything else. Cinobo is an online streaming platform for arthouse cinema, far from the Netflix philosophy”, she added.

“How can we live in the era of accessibility, but not have access to good independent arthouse cinema? This was our inspiration – to make good cinema accessible, and to introduce it to new audiences. We want to create a big community of subscribers, and we believe we can make that happen via interacting with our audience”, she said in relation to the platform, which is a curated sVOD subscription service and an arthouse cinema distributor at the same time. It counts approximately 1,000 film titles, by 640 directors in 84 countries. It presents a new premiere every week, and constantly renewed collections and tributes.

“A 12% of the content is documentary films. We try to add a lot of documentaries to our collection. It is a genre that unfortunately does not attract distributors. The usual distribution method is television, and the audience has identified the product with the medium”, she said respectively. “Cinobo was a bet that worked out. We continue to extend our vision. Streaming came to give life to films after their theatre release – something that died along with DVD players. Now, we have access to quality cinema from home and our mobiles”, she concluded.