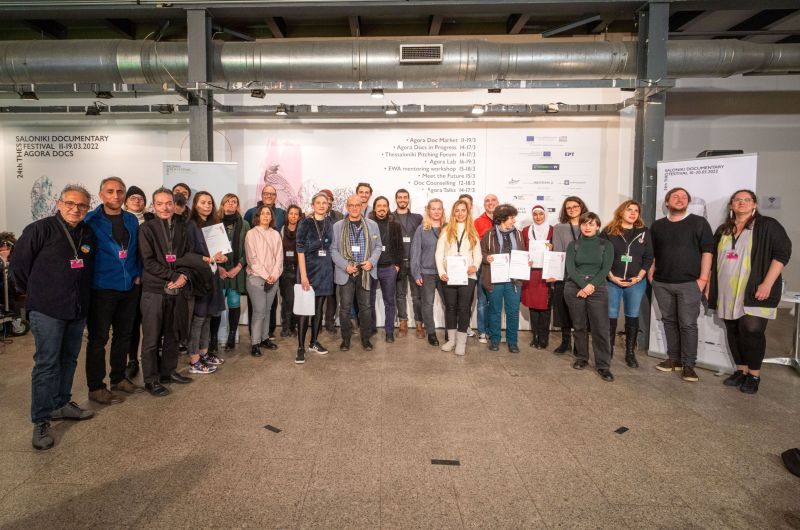 The Agora Docs of the 24th Thessaloniki Documentary Festival, one of the first film markets in the world that was organized digitally when the pandemic broke out, announced its awards. Using all available tools and new technologies, Agora Docs presented new actions and supported successful initiatives in a hybrid event that took place in physical spaces in Thessaloniki and online.

More than 260 international guests arrived in Thessaloniki to participate in the Agora docs activities physically and 50 attended online, giving a clear sign that the industry is ready to get back to business as usual. Elise Jalladeau, the general director of the Festival, and Orestis Andreadakis, the artistic director of the festival made the opening greetings. “I would like to thank the participants, the juries, the team and the sponsors that are supporting us. We had more than 350 film professionals attending the agora, both physically and online. I think this is the best proof that the industry is ready to be back in business, if it ever stopped”, Elise Jalladeau said.

“Before the awards, I wanted to mention the new initiative of Thessaloniki Film Festival, which is the Evia Film Project. A 5-day Agora, complemented with masterclasses, seminars and open-air screenings. It will take place from 15 to 19 June at Evia, the second biggest island of Greece, which suffered from catastrophic fires in the summer of 2021. The Agora will include the Pitching Forum and Works in Progress and all projects must have an environmental angle. The call is open. The deadline is April 15th. It will include fiction, documentaries and new media. We are planning to turn Evia into an international pole of Green Cinema. Thank you very much. We can continue with the awards,” Orestis Andreadakis said.

The head of Agora, Yianna Sarri, was the next to take the floor: “A very big thank you to our sponsors and of course to the Agora Docs team and all our colleagues and the volunteers. Agora Docs and the Thessaloniki Documentary Festival returned to the historic Warehouse C inside the Port of Thessaloniki and opened its doors to accredited guests for meetings and industry activities. A total of 353 meetings were scheduled with the selected projects. The meetings will continue online the next few days. For another year the Agora Docs is the hub for documentary creators with a great number of activities that will continue until the end of the festival like the Agora Talks, the Agora Lab and the EWA Mentoring Program.”

The Thessaloniki Pitching Forum, under the guidance of Ove Rishøj Jensen (Paradiddle Pictures), offers to the selected projects an online  project enhancement workshop to prepare them for their Pitching Presentation to the panel for financiers in Thessaloniki.

The International Jury of the Thessaloniki Pitching Forum, consisting of:

handed out the awards.

The Thessaloniki Pitching Forum Award accompanied by a cash prize of 2,000 euros is bestowed to:

The jury mentioned in its reasoning: “The winning pitch had integrity, a deep affinity to its characters, and a clear awareness of the potential social impact of the film. It also promised a cinematic language to tell what may appear a small story but is one with global relevance. With the hope that this award can help the seeds of an idea grow into a beautiful and important documentary.”

The ERT – Thessaloniki Pitching Forum Award to a Greek project, accompanied by a cash prize of 2,000 euros is bestowed to:

“The winning project is one that tells a story local to Greece, but cleverly framed to draw out its international relevance. The confident presentation and beautifully written synopsis convinced the jury not only that the team is onto a good and untold story, but also that it has the skill and commitment to investigate its murky depths. The multi-layered story, exciting visuals, and character-driven approach all point to a film which can immerse the audience in the reality both above and below the surface. It's a film that needs to be made now, and one which we are sure can find an audience on television to start a public conversation.”

Jenny Vafakou, the director of programming for ERT presented the award.

DAE - Documentary Association of Europe Award which amounts to consultation and free membership is bestowed to the projects:

“The project invites us into a fascinating world to discover a complex character on a journey to find and redefine his own identity, and explore the protective shields he has built to survive. The jury trusted the vision, sensitive approach and personal point of view of the filmmakers.”

“For the jury the winning project showed a real passion to find film and video from around the world revealing both the history of a lost paradise, and the people that shaped it.”

The Beldocs Networking Award which offers accommodation and accreditation for the next International Documentary Festival Beldocs in May 2022 is bestowed to:

“The jury was impressed by a project that reflects on the process of change and the necessity of culture, and does so with a patient approach in the best traditions of observational documentary. The pitch gave a clear vision of the film's aim to mirror structural conflicts with personal ones”

Finally, the Mediterranean Film Institute Doc Award, that offers a Doc Lab scholarship of 2,000 euros, as well as accommodation in Nisyros and Rhodes islands where the MFI takes place is bestowed to:

We chose a very attractive project, with strong international potential, led by a young, talented and promising team.

The documentary director, screenwriter and producer from MFI Doc Lab, Marco Gastine, presented the award.  “This project had all the ingredients to make a very good film, strong characters, conflicts and an interesting topic,” he said. “We want to dedicate this award to the people of Ukraine and the film makers from there. They are fighting with their cameras to tell the truth,” he added.

“We award this film for the important role it can play in the recognition and preservation of LGBT history, and the inspiration it can provide for generations to come.”

“I started this project alone. I only had the help of my community, the lesbian community. I’m a double lesbian. A lesbian born in Lesvos. This gave me the opportunity to understand both sides, the Lesbians and the Lesvians.”, the director and producer Tzeli Hadjidimitriou commented.

“In times when your country ignores an evident humanitarian crisis, there are still ways to put more pressure on authorities. This film tells a story of a man who couldn’t stay indifferent in such a situation and shows us that we shouldn’t be apathetic either.”

The jury bestows the MuSou company award for music and sound services to:

“Thank you for supporting us. Freedom to Ukraine,” said the producer, Martina Strunc.

“This film highlights an important subject matter that has stirred social and political change in contemporary Greece. Change that we would like to see spread and create accountability”. The jury bestows the Greek Film Centre award of 3,000 euros in cash to:

Athena Kalkopoulou, the director of Hellas Film presented the award. “This is really meaningful for us. When we started, we didn’t know how society was going to react. We were hoping that our film would be able to to tell the story,” director Vania Turner said. “It’s a film about social change. We are hoping that someday girls can be safe and free and exist like men,” creative producer and journalistic supervisor Maria Sidiropoulou commented. “We live in a country and a world which can be very reactionary. Sometimes I don’t feel proud to be Greek, especially when it comes to gender issues. Maybe we can help a little bit and make the world a little bit better,” associate producer Amanda Livanou said.

Finally, for its cinematic feel and access to the difficult subject matter in a region that is not often in the spotlight, in a language we do not hear often on screen made us want to see this film completed. The jury bestows the Neaniko Plano award for Subtitling in English or French to:

A new Award was inaugurated this year to support the Greek industry. The Onassis Cinema Award with a cash prize of 5,000 euros. This award is taking into consideration all Greek projects selected for the Agora Docs, either in Thessaloniki Pitching Forum or the Agora Docs in Progress.

The Onassis Culture grants the award to a project which focuses on a community that claims its uniqueness, that comes out of the darkness into the Aegean light, and finally to the whole world, creating a new life, a new state of things. A deeply politic project, which asks for equal treatment, brings hope for an inclusive future, and stands out for its courage, versatility, and romanticism. This documentary about a well-known story with many unknown aspects, meets the Onassis Foundation’s vision for an open society. May this film, which we hope to see soon in theaters, be another step towards freedom and equality.

Orestis Andreadakis, the Artistic Director of the Documentary Festival, presented the award. The Director and Producer, Tzeli Hadjidimitriou was very moved to receive the award. “I never thought that a film like this could ever be awarded. I hope that this is just the beginning. That it won’t stay only in films. That our world will be more inclusive to diversity. All kinds of diversity,” she said.

The Guidance Award by Paradiddle Pictures on distribution, festivals, outreach and impact to one project of the Agora Lab section will be announced on Saturday with the Festival awards.