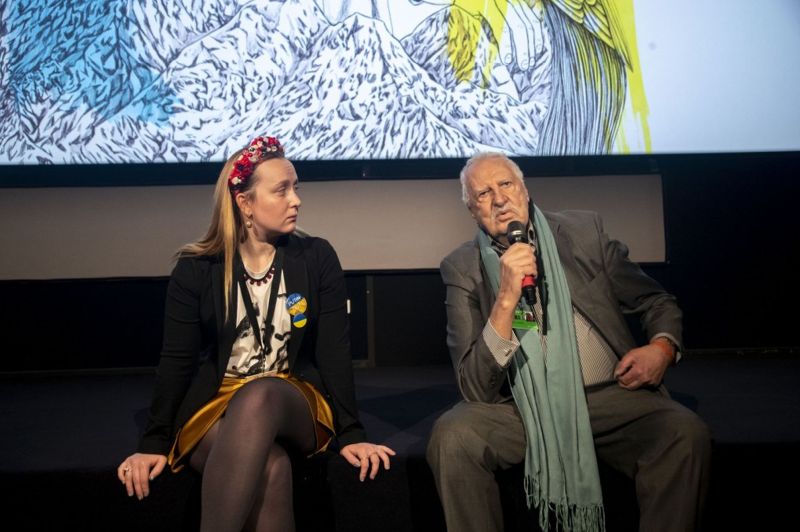 Within the framework of the 24th Thessaloniki Documentary Festiva, the additional special screening of the film Toloka by Mikhail Ilenko took place on Thursday March 17th. The famous Ukrainian director, who escaped from Kiev to Prague a few days ago to avoid the horror of the war, could not make it to Thessaloniki and attend the screening, as planned, as he was diagnosed positive to Covid-19. However, before the screening he was he addressed a greeting to the audience through a video message. In addition, director Fotos Lambrinos, a lifelong friend of Mikhail Ilenko, and Ukrainian actress and producer, Romanna Lobach, attended the screening.

The event was prefaced by Thessaloniki Documentary Festival’s Artistic Director, Orestis Andreadakis. “I would like to start by clarifying to all what we have been saying from the beginning. Documentary Festival and Thessaloniki Film Festival do not collaborate, communicate or associate in any way with any official Russian cultural institutions, for as long as the invasion to Ukraine lasts. This does not mean however, that we do not respect and celebrate Russian culture, to the contrary. We have been home for a lot of Russian filmmakers, of anti-establishment or independent hue, and we will continue to do so in the future. Moreover, we host a series of screenings focused on Ukraine. Toloka and The Great Utopia by Fotos Lambrinos compose a short tribute put together”, he noted.

In his video recorded message, Mikhail Ilenko thanked the Festival for the invitation, pointing out that Toloka - both to him and his team – went beyond the boundaries of a simple film, as it served as a secret weapon against the horrors of war. He went on to make a reference to Taras Shevchenko’s poem, which functions as an allegorical condensation of Ukraine’s dramatic history and the of the resilience displayed by the Ukrainian people. Finally, he warned that the war raging on at the moment might have an impact on the entire of Europe and not just Ukraine.

After the screening of Ilenko’s message, Mr. Andreadakis handed the floor to the two special guests of the screening, director Fotos Lambrinos and actress and producer, Romanna Lobach. The two of them shared with the audience thoughts and feelings about the film and the war in Ukraine. Firstly, Ms. Lobach greeted the audience and stressed out the need for staying informed and participating in the actions related to Ukraine. “It is really important to take part in what is happening, to get informed and to research our knowledge in relation to this country. Up until recently, it was for most people an unknown country. We thought that this country was part of Russia. What’s happening at the moment is terrible, worse than our darkest imagination and nightmares. We must all do something about it. I thank the Festival for participating in this process”, she noted.

Moving on, Mr. Lambrinos took the floor to talk about the director and his close friend, Mikhail Ilenko. “We met in 1965, in Mikhail Rom’s lab in Moscow, at the film school, and we became bodies instantly. We were lucky enough to have Mikhail Rom as a professor. He had previously worked with Tarkovsky and a bunch of other great directors. Since then, we have been friends, I have visited Kyiv and Ukraine many times, I’ve made films there. He has come many times to Greece. For the past few years, every summer, we go to the island of Sikinos together. He is a great person, the greatest of Ukraine’s cinema these days. He teaches directing, he is a member of the academy of arts, an academic. There’s so much to say about him. Both in his last film and in Toloka, he visited war zones in Eastern Ukraine and took footage.”

As Mr. Lambrinos explained, the Ukrainian director is organizing a very special festival in his country for the past 15 years. “For many years now, about 15, he has been hosting an odd festival, named “The Open Night”. It takes place on a hill in a neighborhood of Kyiv’s old town and it lasts for one night. Ten films are screened from 22:00 until the dawn of the following day, and then the jury assembles to give out the awards. The crazy thing is that, because there is a bar in the back, when the winners are called to receive their awards, they are literally carried by two or three people because they are in no position to walk. It is one of the rare festivals of the world, because it lasts for only one night”, the director explained.

After the screening of Toloka, in a question about Taras Shevchenko’s poem, which was the inspiration behind Mikhail Ilenko’s film, and about how it was included in the film. As he mentioned, there are only a few films that visualize a poem. Mr. Lambrinos explained that it is a poem from the Romantics movement, around which Mikhail Ilenko built the history of Ukraine in the film. “Taras Shevchenko lived 200 years ago. He is a kind of a national poet, like Solomos, Pushkin or Goethe. The poem belongs to the Romantics movement and revolves around the concept of forming a national identity. Shevchenko’s lyrical poem is about a love story, in which a couple is violently torn apart, when the man is taken away. However, the girl is beautiful and surrounded by suitors. She promises that she will marry whoever brings back her brother, who is not really her brother but her lover. Misha links the story from the poem with the history of Ukraine. The purpose was to show the history of Ukraine via Toloka, meaning the country shed that is built and destroyed constantly, from the Tatars to Stalin, but continues to stand tall despite everything. Toloka is identified with Ukraine. It is a poetic version of the history of the country, based on a lyrical poem”, he said.

Responding to a relevant question, Mr. Lambrinos explained that Taras Shevchenko wrote his poems in Ukrainian. And as he mentioned, Ukrainian is an entirely independent language. “Shevchenko wrote in Ukrainian. Ukrainian belongs to the family of Slavic languages. It is neither Russian nor Polish. The Ukrainian language is independent and has its own alphabet, rules and grammar. Someone like me, who knows Russian, cannot understand it”, he stated.

As Mr. Lambrinos explained later on, Russia’s stance against the Ukrainian language was more lenient in the time of Lenin. “Lenin offered Ukrainians substantial autonomy and allowed them to finally use their language, in their books and publications. He allowed the Ukrainian literature to circulate and be taught. For this reason, Putin vulgarly attacked Lenin. This, however, did not last for long. Later on, Stalin reinstated the Russian language. The Ukrainian language, nonetheless, survived. Ukraine is a vast country and Ukrainians are wonderful people”, Mr. Lambrinos noted.

Then, Ms. Lobach was asked by the Festival’s Artistic Director, Orestis Andreadakis, about her feelings after watching the film. “I honestly felt deeply sad. Even though I live away from Ukraine, I am closely related to the country. I remember one time when I was walking to school, I looked at the sky, the clouds, and I watched a girl braiding her hair. I realized that that was not a Greek image. I graduated from a Ukrainian school; I know the Ukrainian culture. I therefore know what was going on in the film. I felt such a rage. It is very important to be carrying within you your identity. And there is no ugly sense of nationalism underneath this feeling, as many argue”, the director and producer explained, clearly overwhelmed.

To a question by the audience, she explained that she does not blame Russia’s common people. At the same time however, she acknowledges that a big part of the Russian people supports Putin. “I don’t blame the people. But at the same time, I think we all are partially responsible as citizens in terms of being informed and aware of what is happening. Ukraine, for the past years, has had two revolutions and at this moment is at war so as to stay independent. Unfortunately, many Russians support Putin and the war. It shows on social media as well. It is an imperialistic view that a powerful nation can conquer anyone. I would not want, of course, for the common people of Russia to suffer. Nobody wants that. We can all live in peace. I am 25% Russian, 25% Polish and 50% Ukrainian. We could live in peace. This war was a choice. We shouldn’t however be divided and have gaps in our knowledge. The facts are simple, we know exactly what happened, there is no doubt”, Ms. Lobach said, concluding her statement.