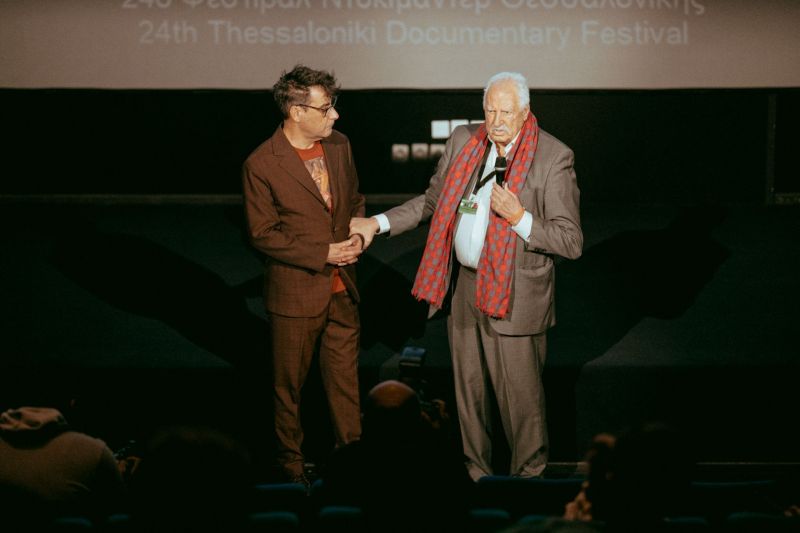 The documentary The Great Utopia by Fotos Lambrinos was screened on Friday, March 18th, as part of the additional special screenings of the 24th Thessaloniki Documentary Festival. The screening was attended by the director of the film and is part of a mini tribute of the Festival, which also includes with the screening of the film Toloka by Ukrainian director Mikhail Ilenko. The screening was prefaced by the Festival’s Artistic Director, Orestis Andreadakis.

“We continue today this mini tribute we added to the program, triggered by Russia’s invasion in Ukraine. Yesterday we screened a fiction film – we made a small exception in this year’s Documentary Festival – Toloka, by Ukrainian director Mikhail Ilenko, a dear and lifelong friend of Fotos Lambrinos. Today we decided to screen once again this magnificent documentary, which will offer answers about history and its grand tragedies”, he stated. The director, Fotos Lambrinos, who attended the screening, wanted to share with the audience some of his thoughts before the screening.

“In 1964, I went to Moscow to study and I met Misha Ilenko. We have been brothers ever since. I visited Moscow and the Soviet Union many times and after my studies, I did a lot of shooting for my films there, I also shot a documentary for ERT. What is surprising is that from 1964 until 2010, I had no idea and no one had told me about the Great Famine of 1932-33. For the 3.5 million casualties, the 1.5 million displaced and the other 1.5 million casualties in the southern areas of Russia, in the wheat fields of Kuban. When I found out, around 2010, I asked Misha and his wife: “Why haven’t you told me about this all this time?” They replied: “We don’t talk about it”. Later on, Ukraine founded a memorial museum, while in the villages mostly affected, there are monuments, museums and testimonials, which I researched and include in the film. It is amazing though, the number of years of silence regarding this issue”, Mr Lambrinos noted.

The screening of the film followed, a film about the history of the Soviet Union from the October Revolution up until the Great Famine. After the end of the screening, the director discussed with Orestis Andreadakis and the audience, answering their questions. Initially, the director offered the audience some information about the process of collecting the documentation footage for the documentary, which, as he explained, was year-long. Afterwards, he thanked his partners who played an important role in the completion of the film.

“It took me five years to make this documentary. The first three years, I was doing research and collecting archival material and bibliography in five different languages. I owe a lot to Misha Ilenko who helped me in Ukraine, and also to my number-one guy, Giannis Tsiolakis, who is no longer in life, who did the editing for this film, and so many more things. His parents were political refugees, his mother tongue was Russian, and he loved getting engaged on the topic”, he mentioned.

As the director explained later on, familiarizing closely with the material for the documentary was an unpleasant process from an emotional point of view. “Wandering around the areas where those events took place, was of course a rather unpleasant experience. If you are not aware of the events – because I only found out then – you are left speechless. You have no words. In fact, Ukrainians objected my film because they argued that the victims were 7 million. I respected my historical consultant, Italian History Professor at the University of Napoli, Andrea Graziosi, with whom I was really close. This man has done substantial research, and published books which I turned to. He was the one who told me that it was 3.5 million”, he explained.

Moving on, Mr. Lambrinos answered the question that both the audience and the Festival’s Artistic Director Orestis Andreadakis shared, about the findings of the visual-photographic material of the two famines used in the film. “The first footage is from 1921, the first Great Famine. From the famine of 1932-33, there are only photographs. I found photographic material in those places. There are museums with such documentation. There are, of course, testimonies from 1985 and 1989. Starting from Stalin’s time, it was prevented by law, on the penalty of death, to refer to the topic. No one was allowed to speak about it, because they were in danger. There are however, photographs from the first and the second famine. From the second famine of 1932-33, the photos were taken by an American. When Gorbachev rose to power, one of our friends who was a documentary filmmaker and sadly no longer in life, without taking permission by anyone because he wouldn’t be persecuted because of Gorbachev, made a documentary about this story. Later on, in 1989, another Ukrainian filmmaker also recorded testimonies. Both of them handed me footage to include in the film”, Mr. Lambrinos explained.

Finally, when asked about the level of difficulty regarding the approaching of such material, Mr. Lambrinos stressed the importance of evidence and truth as guiding forces. “When you do this job that I have been doing since 1963, you get in a process in which the main criterion is the truth and the evidence. There is no other way. Neither your personal commitments, nor your ideological-political beliefs matter. Unless you are promoting a specific agenda and trying to say something that holds no relevance to truth or reality. This is not the case with me. I have made documented and consolidated films, with testimonies, with no room for doubt regarding what is being told”, the director said concluding his speech.