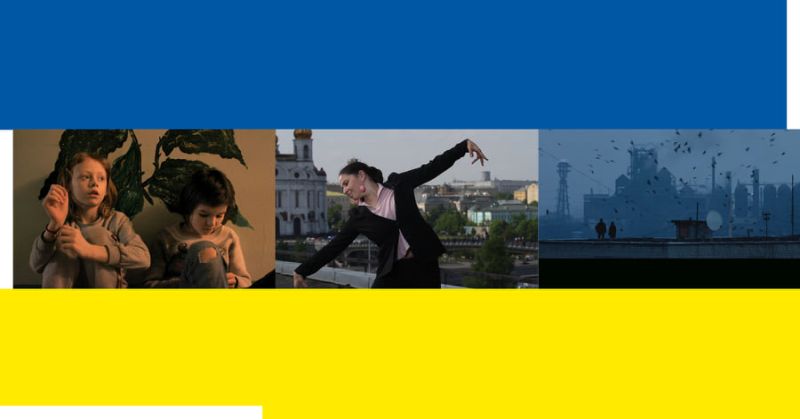 “With our eyes set on Ukraine”: Three shocking films at the French Institute of Greece

The Thessaloniki Film Festival is woefully watching the ongoing horror in Ukraine, which has left nothing but death and destruction on its trail, declaring its support to the victims of the war. In collaboration with the French Institute of Greece, in April 15-16, TIFF presents a spotlight on Ukraine, featuring two documentaries and one fiction film, that shed light onto the unseen aspects of a constant tragedy.

The screenings will be free (seat reservation is required) and will be held in the French Institute (31, Sina str, Athens), at the auditorium Theo Angelopoulos. The films will be subtitled both in Greek and in English. The Festival will support the initiative by the International Coalition for Filmmakers at Risk (ICFA) for Ukraine with 2,000 euros. Also, in consultation with the sales agents of the three films, the Festival will donate the funds that would be spent for the screening of the films to the NGO Voices of Children, which helps children in the affected areas of Ukraine.

The event will start on Friday April 15th, at 20:00, with the screening of the documentary F@ck This Job, which sheds light onto the censorship and the suppression of the freedom press in today’s Russia. Vera Krichevskaya’s documentary was screened at the 24th TDF, earning the International Amnesty Award, while the Festival’s audience had the chance to meet and discuss with Natasha Sindeyeva, owner of Dozhd TV station, which was recently declared illegal and forced to shut down by the Russian regime.

The screening will be preceded by a greeting from the Deputy Minister of Culture & Sports, responsible for Contemporary Culture, Nicholas Yatromanolakis and the director of the Thessaloniki Film Festival, Orestis Andreadakis.

On Saturday April 16th, the torch is passed to the heart-wrenching documentary A House Made of Splinters by Danish director Simon Lereng Wilmont. The documentary was awarded with the Golden Alexander at the recent 24th TDF, which takes us to the hell of Eastern Ukraine, long before the current war. Finally, the fiction film Atlantis by Ukrainian filmmaker Valentyn Vasyanovych, screened as part of the 60th Thessaloniki International Film Festival (2020) immerses us into a dystopian futuristic nightmare that is alarmingly similar to the situation experienced by Ukraine over the last one and a half month.

F@ck This Job by Vera Krichevskaya

A House Made of Splinters by Simon Lereng Wilmont

A few words on the films:

A House Made of Splinters by Simon Lereng Wilmont

As the war in Eastern Ukraine takes a heavy toll on poor families living near the frontline, a small group of strong-willed social workers work tirelessly in a special kind of orphanage to create an almost magical safe space for kids to live in while the state authorities and courts decide the future fate of the child and family.

F@ck This Job by Vera Krichevskaya

Natasha, 35 years old, is a successful woman who is looking for fame, reputation, and dreams come true. She decides to launch an independent TV station in Putin’s Russia. Natasha hires opposition reporters and minorities, as LGBTQ. Soon her “baby” became the lone island of political and sexual freedom. Dozhd TV (also known as TV Rain) is the only independent news TV station that has survived Putin’s rule. Back then, this woman couldn't have known she would fight on the frontlines of the war between Truth and Propaganda and lose all her money. She did not think she would become a “foreign agent” in her own country.

2025, Ukraine, in the aftermath of a devastating war. The area is deemed unsuitable for habitation, the environment is irreversibly ravaged, people are drifting like spooks, struggling to eke out a rudimentary sense of living. Sergiy, a former soldier tortured by PTSD, joins a voluntary team that digs up soldiers’ corpses from unmarked graves. The emotionless identification of the decomposed cadavers is intertwined with the brutality of the dystopian landscape of mud, metal and spouting smoke. A post-apocalyptic tale that seeks hope in the hopeless and squeezes out a drop of affection in the midst of a desert-like human wasteland.